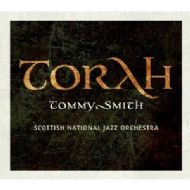 The world has changed since Tommy Smith composed his Torah suite over seventy days in 1999. People of faith in many cases have moved further apart, leading to heightened fear, mistrust and violence. Yet the Christian, Jewish and Islamic beliefs all share the same creation story, as told in the five books of the Torah. Indeed, Muhammad’s arrival is foretold in the fifth book, Deuteronomy.

In his own book, The Genesis Meditations – a work that was affected by its author hearing Smith’s composition in its early performances – Neil Douglas-Klotz, a world-renowned scholar in religious studies, spirituality and psychology, argued that an emphasis on these shared spiritual beginnings would help all interfaith and inter-spiritual discussions, including practical relations between diplomats and politicians from different cultures. Shared beginnings, he believes, unite.

Tommy Smith had no grand ambitions of healing spiritual divisions through his music when he set out to encapsulate Torah in an extended jazz composition, although it’s a piece that he hopes people of all faiths and none will find approachable, stimulating and ultimately rewarding. It’s a piece also that has been subject to no little reassessment.

Originally composed for the great American saxophonist Joe Lovano as featured soloist and premiered by Lovano and the Scottish National Jazz Orchestra during a weekend of concerts in Edinburgh and Glasgow in February 2000, it has since been revised twice and performed by the orchestra in London and Holland with Smith in the soloist role.

Having the suite’s composer as its main voice in performance seems to underline Smith’s narrative approach. These five movements, with their subtexts of creation, departure, the Levites in the temple, the census of the Israelites in Sinai and the handing down of the commandments, are very much stories and there’s even a compositional device, the musical equivalent of an author’s “page turner”, used at the end of Leviticus to make the listener wonder what happens next.

From Genesis’ opening orchestral fanfare and tenor improvisation, Smith is in complete control of his material. This is no big bang, rather it’s a bright, confident and assertive indication of a new beginning, settling into a tenderly gliding melody played over a gently insistent piano and bass figure before the horns interject and the drums reappear. In Exodus the sense of travelling is palpable, be it in haste and excitement or more furtively, facing darker, hidden dangers.

It’s as well to note at this point that, although the saxophone enjoys the spotlight almost continuously in the suite, Smith isn’t a composer, or for that matter orchestra director, to leave his musicians counting rest bars for long periods. There’s a wealth of beautifully realised orchestral detail – subtly sighing muted trumpets; supportive chorales; emphatic punctuation – and room for the Scottish National Jazz Orchestra’s pianist, Steve Hamilton, to improvise with real creative intelligence (note particularly his exchange of phrases with Smith on Leviticus) as the narrative unfolds.

That said, Smith does turn in a tenor tour de force, variously motoring over turbulent rhythms, producing bold, searching and meditative a cappella sequences and bringing out the inherent catchiness in the many passages that could easily be adapted independently as great jazz tunes.

By the time we arrive at Numbers, Smith’s improvisatory muse is on fire and it’s here that his belief in the importance of having a strong rhythm section at an orchestra’s heart is borne out with emphasis. After a fierce and exhaustive a cappella tenor exploration, Hamilton, bassist Calum Gourlay and drummer Alyn Cosker might be excused for joining Smith in this mood with some trepidation but they fall in headlong, creating a swaggering twelve-bar blues that Smith attacks with relish. There’s further orchestral detail here, too, in the form of wailed and moaned asides, the instrumental equivalent of hollered encouragement and comment.

If Smith’s onslaught continues in the final movement, Deuteronomy, there is also a feeling of resolution from the opening bars. This is Smith, the composer and saxophonist, at his most restlessly inventive, careering over a rhythm that has the relaxed but determined gait of a camel, introducing panoramic orchestral voicings and fiery trumpets, blowing freely over Hamilton’s judicious muscle, Gourlay’s stoicism and Cosker’s effervescence and inserting a brief but glorious trumpet and trombone chorale before striding through pianistic thunder into saxophone reflection that answers the questions suggested in the opening movement. How does it all end? That would be telling.

Suffice to say that, ten years on from its first performance and played by an orchestra that brings absolute assurance and collective panache to its every assignment, Torah stands as a composition that embodies artistic vision and imagination and honours the jazz tradition of making music of genuine substance come alive in the moment. It’s a major work. I’ll put it no higher, although others, in time, may well choose to.