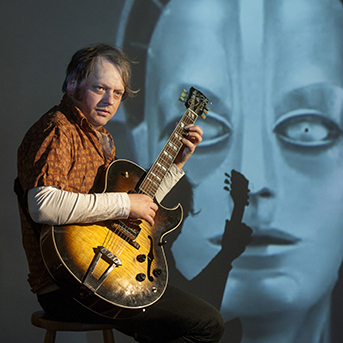 It isn’t true. Watching too much television doesn’t make you go square-eyed. Graeme Stephen will confirm this – and he should know. The Edinburgh-based guitarist has spent more hours in front of the screen than he cares to count as he prepares to premiere his new score to the classic silent movie Metropolis on the Edinburgh Fringe.

Stephen has made a specialism of putting his own music to the works of Fritz Lang, who directed Metropolis, and his film making contemporaries including F W Murnau and Robert Wiene over the past few years. Metropolis will be his seventh soundtrack and is one of three that Stephen will be performing in Edinburgh this month.

The guitarist, who has been one of the Scottish jazz scene’s most compelling figures since he came down to the central belt from his native Aberdeen in the mid noughties, became interested in composing film scores round about the time he made the move south. Nashville country-soul collective Lambchop performed the soundtrack to F W Murnau’s Sunrise that they’d originally created for San Francisco International Film Festival at the Usher Hall in late 2004. Stephen went along and was mesmerised.

“I’ve always been interested in films,” he says, “but it was seeing that Lambchop gig that made think, I’d like to have a go at this. I’d seen the film before and I remember being in tears watching it for the first time, so there was a definite attraction in working with it for me. Other favourite musicians of mine, like the guitarist Bill Frisell, have written music for silent films, and people have told me that my music has a lot of imagery in it, so when I was looking around for some inspiration that would make me write I decided to try and write a score for Sunrise.”

His music for Sunrise appears on a double CD, Films, which Stephen released in 2013. Its companion on the disc set, his score for Nosferatu will be reprised this month along with his one for The Cabinet of Dr Caligari. These films have an element of escapism but for Stephen one of the attractions of working on Metropolis is that, almost a century after it was made, much of the industrial world it portrays is strikingly relevant today.

To help him to realise the music that the film stirred in his imagination he has returned to the Amsterdam-based string quartet Zapp4, for whom Stephen composed his 2015 suite Distances, and long-time collaborator, drummer Tom Bancroft, one quarter of the Playtime Collective that Stephen put together with saxophonist Martin Kershaw and bassist Mario Caribe to explore new and old music in regular sessions in Edinburgh’s Outhouse bar-venue.

Introduced to Zapp4 by another long-time colleague, saxophonist-piper Fraser Fifield, who’d worked with one of the group’s violinists, Oene van Geel on another project, Stephen found the string quartet to be his soul mates.

“The way they improvise together is amazing,” he says. “I know from working with them on Distances that I’m probably writing too much for Metropolis and that when we get to the rehearsal stage, we’ll probably throw out a lot of what I’ve written because I’ll arrange a passage for the four instruments and they’ll take, say, the cello line and put their own stamp on it as an ensemble. They have a way of bringing their own sound to something and yet staying true to the original idea.”

Bancroft, who will feature alongside bassist Caribe and Stephen on the Nosferatu and Dr Caligari gigs at the Fringe, is given even more freedom than the string players.

“Tom tends to focus on what’s happening onscreen rather than watching the parts I’ve written for him,” says Stephen. “And that’s absolutely fine because I know him well enough to trust that whatever he’ll play, it’ll fit in with what the rest of us are doing. It’s not as if anything that doesn’t get used will be wasted – I’m forever reworking ideas that ended up on the cutting room floor for other situations.”

With Metropolis, as with his other soundtracks, Stephen hopes that his music will let the audience see the film the way he sees it without his music making big statements that distract from the storyline.

“I think as a composer you can add to the impact that certain scenes make and because I’ve watched the film hundreds of times now, there might be something that I’ve noticed and can highlight that the audience might not pick up on if they’re seeing it for the first time,” he says. “But ultimately the important thing is that we don’t get in the way.”

Graeme Stephen had a dream band. In his mind he could hear a fiddler, two saxophonists, double bassist and drummer joining his own guitar, playing music that, although essentially jazz, also drew on traditional music from Scotland and Eastern Europe and whatever other influences were impacting on his imagination at any given time.

Then, with an invitation from his hometown promoters Jazz Aberdeen, the organisation that all too briefly brought new energy and vibrancy to the Scottish scene, to put something of his own choosing together for Aberdeen Jazz Festival 2005, Edinburgh-based Stephen’s dream suddenly became a reality.

In the years since that first gig, Stephen’s sextet has become not only one of Scottish jazz’s most exciting propositions but also a band that’s captured the attention of promoters and festival organisers south of the border, having appeared at London and Manchester jazz festivals. It’s also earned Stephen places on projects such as the Jerwood Charitable Foundation/PRS-funded Take Five initiative, where jazz musicians are mentored by top role models such as saxophonist John Surman, and a Scottish Arts Council Creative Development Award.

These schemes could hardly have chosen better advertisements than Stephen, a musician who throws himself wholeheartedly into every learning opportunity and whose music has become all the richer for those experiences.

“You can’t really help but learn from someone like John Surman,” he says. “He played on some of the first jazz albums I listened to, like John McLaughlin’s Extrapolation, which was made about forty years ago, and the amount of great music he’s played and written since then is colossal. The whole thing about Take Five is that it’s designed to empower you to make the best of your projects and John Surman was very encouraging. So I feel that it and the Creative Development Award, which gave me time to write for the sextet, with the cellist Ben Davis instead of a fiddler, have set me up for the long term. Although I play in other situations, I can see the sextet being my main voice, if you like, for years to come.”

The first fruit of the SAC’s beneficence was the Vantage Points suite, a series of impressionistic pieces inspired by locations such as Callanish and Ardnamurchan, which Stephen’s sextet aired, with Davis in the line-up, in concerts last December. His association with Davis, who also leads the Mercury Prize jazz nominees Basquiat Strings, is now set to continue as the cellist will expand Stephen’s group to a seven-piece for a SAC Tune-up tour due to take place in February or March 2010.

“Ben’s an amazing player with a terrific sound, which makes him really inspiring and yet somehow also daunting and quite a challenge to write for,” says Stephen. “I’m sure other musicians go through the same things I do in that I’ll write something and think, I’m not sure about this or I’m not sure about that. I certainly felt that with Vantage Points but then I went into rehearsals and gave everyone their parts and when I heard the music coming off the page I was actually quite pleased with it.”

There certainly seems to be no shortage of ideas composition-wise for the sextet, which will be playing Vantage Points and another hour’s worth of music come the tour with Davis. Often, says Stephen, he’ll try and introduce a sense of place into a piece, either by going there or from a photograph, although in the case of Vantage Points’ Callanish, he’s spent enough time on location to be able to go back in his head.

“I’m always getting ideas for new pieces, although sometimes I’ll go for months without actually working on anything specific,” he says. “I also have a lot of ideas that I’ll discard and maybe go back to later. It’s easier when you have a specific goal to work towards and you get a momentum going. That’s when I really enjoy the whole process of taking a phrase and developing it into something and with the sextet being full of musicians with different styles and backgrounds and who can all go off in different directions as improvisers, it can be really inspiring. It gives me a lot of scope as a composer.”

Over the past few years there’s been much talk about how, with jazz being now a fully international music, its focus has shifted away from America and that Europe is now where the most creative jazz is being made. Stephen’s sextet is undoubtedly international in outlook but the guitarist’s own journey into jazz from rock music began with the American model and he’s still taking inspiration from it.

“The music we play in the sextet really reflects where we come from and who we listen to,” he says. “For instance, just being in Aberdeen to begin with, I was exposed to a lot of Scottish music and playing with Fraser Fifield, who’s an amazingly eclectic musician, over the past twelve years, has had a great impact, particularly in terms of Eastern European music. I also studied with an American guitarist in New York, Brad Shepik, who’s really into Bulgarian music. But recently I’ve gone back to listening to Jim Hall, who was the guitarist who really got me into jazz, especially the album he made with Sonny Rollins, The Bridge. He’s nearly eighty but he’s still making inventive, creative, quite impressionistic music by working within the jazz tradition. I listen to him and I learn so much. It’s like going back to school.”