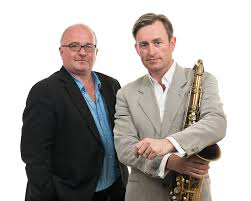 Leading Scottish jazz duo Tommy Smith & Brian Kellock appear at the Ceilidh Place in Ullapool on Tuesday, August 11 at the end of a series of dates that has taken them almost literally from Land's End to John o’ Groats in reverse.

Saxophonist Smith and pianist Kellock have worked together extensively over a long period, having known each other since the 1980s when they emerged on the Edinburgh jazz scene, Smith as the gifted teenager who released his first album, Giant Strides, aged sixteen in 1983 and Kellock as the energetic talent with blues singer Tam White’s band, the Dexters.

As well as recording three duo albums, the most recent being last year's Whispering of the Stars, and touring together on both sides of the Atlantic, Smith and Kellock have been central to several of the Scottish National Jazz Orchestra's most successful projects, including a new version of George Gerswhin’s classic Rhapsody in Blue, an internationally praised recording of Duke Ellington’s music, and the recent Frank Sinatra centenary celebration with American singer Kurt Elling.

In concert, with an encyclopaedic knowledge of jazz standards to draw on, the pair can go wherever the mood takes them and their relaxed, natural onstage rapport adds to the entertainment value.

They appear at the Ceilidh Place in a rescheduled concert that was originally planned for June, having travelled from Lyth Arts Centre, near Wick, to St Ives Jazz Club, in Cornwall on an extensive tour that included a rapturously received gig at top London jazz venue the 606 Club.

"We've covered a lot of miles this summer and we’re particularly looking forward to playing at the Ceilidh Place as the original date was too close to the Scottish National Jazz Orchestra’s concert in Ullapool with Eddi Reader" says Smith. "We'll be playing tunes that jazz fans and casual music listeners alike will know. It's a simple presentation: two guys playing acoustically, no PA, just the natural sounds of our instruments, walking a musical tightrope without the safety net of a rhythm section and enjoying each other’s company."