Boys of the Lough founder honoured at Edinburgh Festival

Cathal McConnell, founder of the enduring traditional music group the Boys of the Lough, was presented with a Herald Angel award for his Edinburgh Fringe 2015 performances at a ceremony held at Edinburgh Festival Theatre on Saturday, August 29.

The awards are presented by Glasgow-based newspaper The Herald in recognition of excellence in performance across the range of festivals that takes place in Edinburgh during August and this year’s recipients included dance companies, theatre groups, cabaret artists, classical musicians and choirs, all of international standing.

The flute and whistle player, singer and storyteller, whose Fringe concerts at artSpace @ St Marks also featured fiddler Duncan Wood and cellist Christine Hanson, was presented with his statuette by Faith Liddell, director of Festivals Edinburgh and Dr Sandra Cairncross, dean of the Faculty of Engineering, Computing and Creative Industries at Napier University, co-sponsors of the Angels 2015 with Woods Brownie Co.

Accepting his award, McConnell expressed his delight at being given such recognition and before going on to entertain fellow Angel winners with a characteristic set of tin whistle variations, said: “I’m honoured.” 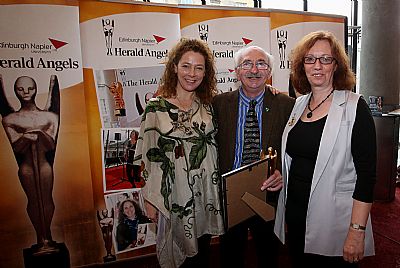 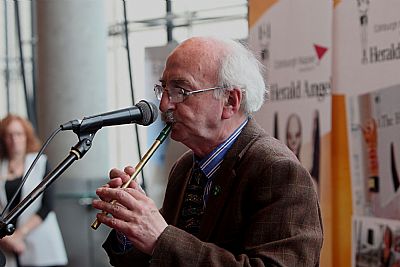