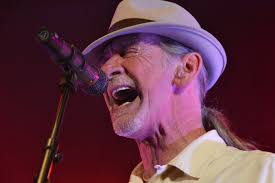 When Alex Ligertwood steps onto the stage of the 02 ABC in Sauchiehall Street on Thursday, November 5 with Brian Auger’s Oblivion Express it will be the first time the singer has appeared in his hometown in more than forty-five years.

A residency in Rome with his former band the Senate, the Scottish soul group much admired as a backing band by singers including Ben E King and Solomon Burke, took Ligertwood off down a road that would lead to him fronting Santana for fifteen years, as well as working with other illustrious names such as Jeff Beck, Narada Michael Walden, Average White Band, and former E Street Band keyboardist David Sancious.

And the adventure continues as the now sixty-eight year old Ligertwood finds himself currently promoting new releases by two bands he features in: Oblivion Express, whose Live in Los Angeles reaches the UK in time for the band’s latest tour;  and Troc, the band Ligertwood works with in France. He has another band in Germany and a solo album nearing completion back in the U.S. with long-time collaborator David Garfield, keyboardist and musical director for George Benson.

“People say to me, when are you going to retire? And I tell them, that word doesn’t exist in my vocabulary,” says Ligertwood down the line from a German hotel in a voice that still has some of his native brogue despite forty years in California. “If I can’t sing any more, then fair enough, I’ll stop singing … and get a gig playing guitar instead.”

Like many musicians of his generation, Ligertwood took up guitar during the 1950s skiffle boom. He’d always been involved in music, singing in school choirs and playing in the Boys’ Brigade pipe band. His father, an amateur drummer, had bought an upright piano, taught himself to play and thus created the venues for family gatherings and sing-songs in Kelvinhaugh, Govan, Partick and Drumchapel as the Ligertwoods moved around.

Ligertwood’s skiffle group grew into the Meridians, whose drummer, Jeff Allen, moved on via the Beatstalkers to East of Eden and Van Morrison, among many others. Ligertwood also played with the East Kilbride-based Kwintones before joining the Senate.

“There were always lots of bands in Glasgow back then, lots of music and lots of places to play, the Pink Panther, the Castle Club places like that,” says Ligertwood. “A lot of good singers came out of that era: Alex Harvey, Maggie Bell, Jimmy Dewar, Hamish Stuart. Glasgow always had good soul and blues voices.”

“We’d played in Hamburg and toured American bases all over Europe,” says Ligertwood. “So we’d developed into a good, seven-piece soul band. But with Solomon, Garnet and Benny, who became a real mentor to me – it was him who encouraged me to be a lead singer instead of a guitarist-singer – we really grew as a band. Then we got offered a residency in Rome, went over for a month and stayed for three years. Some of the band never came home.”

Towards the end of 1970, Ligertwood fetched up in London where Maggie Bell recommended him to Jeff Beck. Music business politics got in the way of that edition of the Jeff Beck Group doing more than rehearse and record, however, and after a year Ligertwood was looking for another band.

Not long before Ligertwood had joined Beck, his former Senate colleague Robbie McIntosh and fellow Glaswegian, guitarist Jim Mullen had joined a new band organist Brian Auger had formed. Smarting from his experience of the music industry when his arrangement of Bob Dylan and Rick Danko’s This Wheel’s on Fire (later revived as the theme from Absolutely Fabulous) had briefly made Auger and its singer, Julie Driscoll pop stars, Auger had decided to go his own way.

A jazz pianist who’d become a Hammond organ devotee, Auger wanted to experiment with jazz-rock and formed Oblivion Express, so called because this new direction was, he felt, guaranteed to take him hurtling to ignominious failure. It didn’t quite work out that way.

After an initial spell of interspersing an energetic style similar to his former colleague, guitarist John McLaughlin’s pre-Mahavishnu Orchestra recordings with more reflective, even folk-based material, Oblivion Express began to stretch out on McIntosh’s grooves. Auger, who’d been handling vocals, wanted to concentrate more on organ and electric piano and so either McIntosh or Mullen – nobody seems sure – recommended Ligertwood and with Auger’s enthusiastic blessing, he climbed aboard.

This second instalment of Oblivion Express – three fifths Scottish, Ligertwood proudly declaims – established the soul-jazz blueprint for the band that Auger tours to this day from his California base. It also took Ligertwood to his ultimate goal, the U.S.

“Part of the attraction of joining Brian was that he had an American tour lined up,” says Ligertwood. “I’d always wanted to get over there and play with the greatest musicians I could find and after one tour I had time left on my visa. So I stayed around and then decided to move to California permanently. I got my status sorted and I’ve lived in the U.S.  ever since.”

Drummer, songwriter and producer Narada Michael Walden had heard Ligertwood sing with Auger and hired him for a tour. Then, Eddy Offord, who produced prog rockers Yes and engineered Oblivion Express recordings, got in touch to say he was working on an album. They’d tried various singers, some of whom could handle some of the songs, some of whom could handle others. But no-one could handle all of them. Would Ligertwood like to try? Ligertwood duly went up to Woodstock, spent a week in the studio and the album, keyboardist-guitarist David Sancious’ True Stories, stands as one of his greatest achievements.

“It was as if David had written everything for me,” he says. “It was very progressive and it gave me something to actually sing. Of course, I then move the family up to Woodstock because there was lots going on there and I get a call from the Santana office and have to fly back to California.”

What he thought was an audition with Santana turned out to be a rehearsal, after which he heard nothing.

“Two or three weeks later they called me up and said, are you ready? I said, ready for what? They said, we’re going on tour. I said, I’ll be right there. It was a major step up for me. This was pretty much everything I’d ever wanted. Back in Glasgow I’d never wanted to do anything other than play music. Now, here I was touring the world, playing to enormous audiences, getting my songs on Santana albums. It was a great experience, a very, very happy fifteen years.”

Working with such a high profile artist as Carlos Santana did, however, give Ligertwood an insight into stardom and he didn’t like what he saw.

“I can slip under the radar quite easily, even as the singer in a band like that, but for Carlos, life is very different from the normal person’s. He’s spotted immediately everywhere he goes and people don’t leave him alone.”

Despite feeling in retrospect that he might have stayed with Santana too long, Ligertwood remains friends with the band and joined them onstage when he met up with them in Berlin recently.

He’s joined Auger onstage also over the years and two years ago his near-neighbour (in American terms – they live a mile apart in Santa Monica) asked if Ligertwood fancied coming along to a local club, the Baked Potato, to sing a few songs. One thing led to another, a live album was recorded featuring Auger in typically energetic, creative form and Ligertwood’s gymnastic, elastic singing still at its peak, and tour dates were put together.

“I was happy to go back on the road with Brian because I always enjoy singing with him,” says Ligertwood. “Then, when I saw that we were due to play in Glasgow I got really excited. My immediate family emigrated to Canada years and years ago but I have a few cousins there and some old friends. So it’ll be great to go back. I might even start the gig with I Belong to Glasgow.”