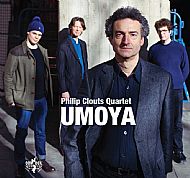 Woodend Lawn Tennis and Bowling Club in the Glasgow suburb of Jordanhill is a long way, in terms of more than just distance, from the locations conjured up by the music on this recording.

A modern breeze block building, opened in the early years of this century, the club is known for housing music nights that feature mostly Americana acts and the chap who runs them, Alan Hendry of Sounds in the Suburbs, has established a loyal clientele who will trust his judgement on an artist unknown to them.

Alan doesn’t promote much jazz at all but he’s open to persuasion and if he puts the word out that he has something worth hearing, his regulars – tempted by the idea of experiencing live music just a stroll down the road from the house in many cases (although the club’s affordable drinks tariff might play a part in this too) – will turn out.

So it was that, in the autumn of 2014 while on a series of Scottish dates organised to give these compositions the benefit of some road miles, a slightly different line-up from the Philip Clouts Quartet that features here found themselves playing to a roomful of people who are far more used to listening to singer-songwriters with guitars than hearing, say, township jazz. It might have been a recipe for disaster but the music – and the playing of it – won these strangers over conclusively. The encore demanded was no obligatory observance of a concert-goers’ ritual or polite gesture for form’s sake. They genuinely wanted more.

Listening to the music some six months on, it’s easy to hear why. Philip Clouts is a bit of a musical magpie. He picks up on a mood, a snatch of melody or a rhythm from somewhere – it might be from South Africa, where he was born before leaving with his family for England as a young boy, or Cuba, India or Italy – and the fact that he remembers it and can turn it into a musical idea of his own somehow makes it, if not universally memorable then readily appealing to willing, susceptible ears.

One of my abiding memories of that night in Jordanhill is of the guy who came up to Philip afterwards while we were chatting and raved about the grooves in the music. He hadn’t, he said, experienced anything like them before. I know what he meant. Dave Ingamells, the drummer both then and on this session, does have a lightly emphatic touch of his own and he and bass guitarist Alex Keen immediately serve notice of this music’s dancing qualities on the opening track, Lila.

Groove plays an important part in Clouts’ music. So does clarity. His melodies, whatever their provenance, are always very direct. They can sound as if he’s writing notes to accompany words, which may be an element of his father’s poetry-writing talent that he inherited, and that same uncluttered approach informs both the arrangements he gives his compositions and the improvisations that grow out of them.

The jabbing chords of Lila and the piano solo that follows saxophonist Samuel Eagles’ statement of the melody, on soprano, are typical of the sure sense of economy that Clouts brings to his playing and general musical thinking. It’s there also in the call and response between Keen and Clouts, this time having switched to the Wurlitzer electric piano, that introduces Walking in Starlight and in the relaxed yet intoxicating melody of Direction South, a reminder that simplicity can be a strength.

Even when Clouts injects a sense of drama, as witness the slightly ominous chords that herald Amor’s, by comparison, light, airy theme, he never overplays, leaving the mood and the music to speak for itself. He’s particularly well served in this by Keen and Ingamells.

It might seem unnecessary to say so but Ingamells is the most musical of drummers, always concerned with the hi-hat detail or the rim-shot pattern that serves a composition’s needs, and while he and Keen work very much as a team, they also seem to have found a way to keep out of each other’s hair. This gives the music a great sense of spaciousness and while Keen has all the chops a bass guitarist needs, when he takes a solo on Meandering (a title that shouldn’t detract from the piece’s firm sense of purpose) it’s fashioned to fit the musical landscape rather than draw attention to his abilities.

As the “singer” of Clouts’ wordless songs, Eagles carries a lot of responsibility. His tone on both soprano and tenor is firm but pliable and his phrasing lends itself perfectly to the immediacy of Clouts’ melody writing and the conversational nature of the group as a whole. This communication between the players gives the music great continuity, a particular example being on the very African flavoured title track where Eagles follows Clouts’ solo, with its pearly-toned upper range phrases, by striking up a dialogue of his own with the rhythm section that transmits equally clear ideas to the listener.

In summation, then, Umoya both marks a new chapter in Clouts’ career as a musician and bandleader and carries forward the experience he has gained over the years from his days of learning with his fellow members of the South African diaspora in London through to his more recent life in Dorset, a move that seems to have given his composing new impetus.

The rolling countryside and sharp coastline around Lyme Regis that inspired Clouts’ Sennen Cove album may not have such an obvious presence in these eight tracks but a similar receptiveness to ideas, aural rather than visual and physical in this case, is at work and the end result is again one of attractiveness with the added headiness of exotic flavours and joyous, dancing rhythms.