The Wiyos - how Bob Dylan leant band a hand 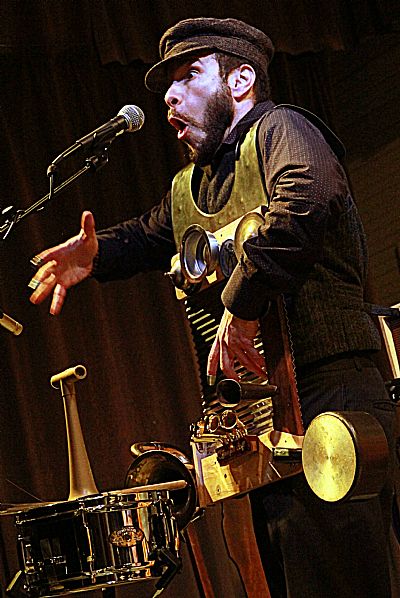 Michael Farkas always brings a notebook when his group the Wiyos tours in the UK. The band may have earned a reputation over here as well as at home for presenting American roots music that follows in a long tradition but Farkas always learns about musicians he’s never heard of when he’s chatting to UK fans after gigs.

“Audiences in the UK are always so well-informed about American music,” says Farkas down the line from his New York home. “We’ve felt since our first visit a few years ago now that we’re playing to receptive ears when we tour over there and I’ve always been impressed by how you people have investigated our music or the music that’s influenced us. It might seem perverse but I always pick up tips about American music from our fans.”

Although the Wiyos are named after one of New York’s most notorious gangs – Farkas and co-founder, now former guitarist Parrish Ellis always felt that bands and roving gangs of pirates shared certain similarities – the seeds of the band were sown in New Orleans rather than Farkas’s home town.

In his early twenties, Farkas spent a year in the Crescent City and had his ears opened, as he puts it, by the music he heard on radio and in the streets. For a budding singer who had taken up harmonica and washboard after hearing jug band records back home, New Orleans offered surprises almost literally on every corner.

“This was before Hurricane Katrina but even after all the troubles that that brought, New Orleans, although it attracts a lot of hype, really lives up to that hype,” he says. “I’d grown up listening to blues but it was very much the Chicago sound I listened to, people like Little Walter and Sugar Blue among the harmonica players. Bob Dylan and Neil Young were harmonica influences too, and I still like all these people. But Blind Blake and Professor Longhair, although they’re not harmonica players, I had no idea they existed until I heard their records coming from one of the radio stations down there and when I heard that syncopated, bouncy style they had, that was it for me.”

In New Orleans Farkas also fell in with a group of street musicians and their ability to draw a crowd, and just as importantly if not more so, hold that crowd’s attention had a big impact on him. With the Wiyos he sees his role as an entertainer as much as an artist, although there’s artistry in coming up with new material in an old style.

“It was a few years after I got back from New Orleans that I met Parrish, down in the Lower East Side of Manhattan where the original Wiyos – the gang – roamed,” he says. “He had the Piedmont style of blues guitar picking that I’d heard in New Orleans under his fingers and we started writing songs together almost right away. We were two guys looking for similar partners in crime and writing original songs in an old-time style came quite naturally to us.”

Ellis left the band he co-formed just before the Wiyos made their second Celtic Connections appearance, in a double bill with another sometime New Orleans street musician, jazz singer Meschiya Lake, in 2012. The travelling musician’s life, Ellis had found, wasn’t for him but he had been literally instrumental in helping the band secure one of its defining experiences, the 2009 U.S. tour with Bob Dylan.

“That was awesome,” says Farkas. “We didn’t even know we were on Bob Dylan’s radar, although some people told us later that he’d been spinning our stuff on his radio show. Usually, the opening acts on his U.S.  tours pay to play and apparently Bob hadn’t been happy with what he’d been hearing. We didn’t have the machinery behind us – or the finances – to buy ourselves onto a tour like that so it was great that the guy who organised the tour got to hear us and thought we’d fit. It was certainly a big thing for us. It got us in front of a whole new audience.”

Now working as a trio - with guitarist Teddy Weber and bassist Seth Travins joining Farkas on a suitcaseful of instruments that “always gets customs officials interested” - the Wiyos are back playing in the rootsier style that made Seasick Steve a fan, too, after the more eclectic, more electric style of their Twist album.

“Twist was just a phase we went through,” says Farkas. “We wanted to try something different after losing Parrish but we’re back in the vaudeville era again and putting on a show. We don’t bring the kitchen sink with us in terms of all the instruments we could fly over but we’ll have enough to create the Wiyos sound.”