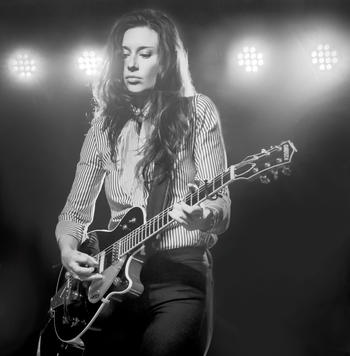 The Texas-born, Georgia-raised, Nashville-based Lynn worked with Burnett, whose innumerable credits include tours with Bob Dylan, albums with Los Lobos and Elvis Costello and the soundtrack to O Brother Where Art Thou, on music for the popular American television programme True Detective and is full of admiration for his approach, not least to deadlines.

“I’m familiar with deadlines,” says Lynn, whose first name rhymes with Vera. “They’re a useful thing to give yourself but if I’d been given the job of writing songs for True Detective myself, I’d have been working on them for six months.”

There was no such luxury in producing songs to order for a weekly show. With security around the script very tight, to say the least, Lynn and Burnett would be given their brief the day before the scene was shot. Sometimes the brief was very brief indeed.

“One consisted of the phrase ‘a church in ruins’,” says Lynn. “So we wrote a song called A Church in Ruins. The thing about T-Bone, though, is he’s very good at what he does, obviously, and he really understands how deeply music can affect the experience of watching action on screen. He also trusts his instincts which you have to do when go in with no idea of what’s required and write and record a song in one day.”

Having her voice and music associated with a high profile series has been a great help in raising Lynn’s own profile in the U.S. Her experience with Burnett has also increased her liking for Laphroaig malt whisky, but that’s another story. What she’s learned above all from the True Detective exposure is that there is an audience for introspective, darkly atmospheric music.

Atmosphere has played a big part in Lynn’s music since she began writing her own songs in her teens. Having played violin from a young age and shown an aptitude for guitar by strumming self-taught chords on her mother’s guitar, she was given her own guitar at fifteen and soon afterwards won her high school talent show. Thus emboldened, she began a weekly residency at a local restaurant in Alabama where the challenge of playing current pop hits and Beatles, Joni Mitchell and Neil Young classics for three hours was lightened by her discovery of margaritas.

At university in Athens, Georgia she became part of a scene where, she says, everybody was playing in a band and working in the service industry as well as studying. While there she hooked up with an agent in Nashville who got her support slots on tours with k d lang, among others, as well as her own gigs and she eventually made Nashville her base, initially  still supplementing her income from music in the time-honoured fashion of waiting on tables and serving drinks in bars.

“I’d recorded my first album while I was living in Athens but on the k d lang tour I met Joshua Grange, who has also worked with Sheryl Crow and Dwight Yoakam, and he agreed to produce my second album, The Avenues,” says Lynn. “By this time I’d been waitressing and barkeeping for about ten years and I decided to stop doing that and concentrate on music because unless you’re 120% focused on writing and performing, it’s hard to make progress. It was a struggle to survive on music alone to begin with and I couldn’t have done it without the support of my family and friends but I think it was the right decision. I’m just about making enough to live on now.”

It was her manager, Sheri Sands’ persistence that made the connection with T-Bone Burnett happen. Sands and Burnett had worked together on Raising Sand, the hugely successful album by Robert Plant and Alison Krauss, and convinced that Lynn’s music had qualities that would appeal to Burnett, Sands kept sending him tracks “the old way” – by post.

The partnership got off to an odd start, says Lynn. They met for lunch. Burnett asked if she might be interested in writing songs for True Detective. Lynn said of course and some time later Burnett sent her an album by Lydia Mendoza, the Texas-born conjunto singer. “It was all in Spanish,” says Lynn. “I was totally confused.”

It all worked out well in the end and Lynn has gone on to also write with Roseanne Cash, daughter of Johnny. They got on famously, although Lynn hasn’t sought Cash’s endorsement of her version of Ring of Fire whose deliciously slow pace hasn’t been to every poster on the internet’s liking.

“I know Roseanne’s aware of it but I’m not going to be the one who asks what she thinks,” says Lynn, who’ll be joined for her Celtic Connections appearance at the 02 ABC on Friday, January 15 by the aforementioned Joshua Grange on pedal steel and baritone guitars.

“I really write for a band and playing as a duo can be a challenge,” she says. “At first I thought that, without a drummer, I should drive everything but we’ve worked out very specific parts to support each song. I’ve learned to embrace silence.”