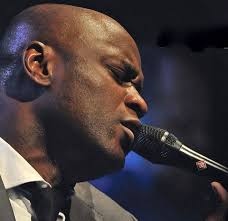 Ola Onabule is preparing to climb his personal Everest. Again. Towards the end of last year this London-born son of Nigerian parents released his eighth album, It’s the Peace that Deafens. A superb blend of raw rhythms from his African background, among other sources, and super-sophisticated, highly developed jazz-soul singing and songwriting, it’s a major step up from its predecessor, Seven Shades Darker – and that one raised the bar significantly.

Initial media responses told Onabule that he was doing something right but the praise is wearing off and he knows he has to try and maintain an upward trajectory.

“I think every artist is the same,” says the singer who makes his Celtic Connections debut at the 02 ABC on Friday, January 22. “We always want to outdo ourselves and the truth is, we don’t know how we did what we did the last time. We don’t go down a mine and we’re not saving babies but taking on what is an unknown science is the scary part of the job.”

Onabule is constantly developing new ideas, shutting himself in his music room late at night, a time when, he says, he’s always come alive. Even as a child growing up in Nigeria he was restless and wouldn’t sleep and when he moved with his parents back to London in his mid-teens, he would lie awake working his way through the reading list his English teacher gave him.

“I always liked words,” he says in explanation of his poetic lyric writing style. “At school in Nigeria the English lessons were always my favourite and when I returned to the UK, I had an English teacher who must have spotted something and always encouraged me. She was always pointing me in the direction of another book, another author. I know songwriters are often encouraged to be minimalist but I take the Liberace view – too much of a good thing is wonderful. If you can express yourself, why hold back?”

As the first-born son of middle class African parents he was, he says, expected to follow one of three career paths: law, accountancy or medicine. Coming from a family of lawyers, he didn’t want to disappoint. But through a “catastrophic epiphany” he did. In his first year at law school he was heading for a first class degree. In second year, results declined and in year three he was so immersed in music and performing that he’d meet people at his gigs and not realise they were on the same course as him.

A singer was the last thing his father wanted him to become but a switch to art school, where he immediately fell in with a group of jazz musicians, saw him both appease the family with a degree and sign to Elektra-Warner Bros Records in his final year.

“It just seemed so natural to be creative during the day and at night,” he says. “Singing and studying were all part of the same thing and as the Nigerian boy who had come back to the UK wanting to be a fully engaged Westerner, because music from home was not at all cool at that time, I was completely immersed in Steely Dan, Michael McDonald and James Ingram as well as the new romantics and 1980s R&B.”

Time - and the disappointment of being dropped by his record company after his fourth album - altered his view of the music he heard growing up in Lagos. He began to hear it afresh and realised the effect it and the very musical, subtly tonal Nigerian language had had on him. Losing his record deal turned out to have a freeing effect as working on his own away from the record business he felt able to concentrate on his own business, which is writing songs and getting them out to an audience.

“When I signed that deal, I thought, that’s me. I’m off. It’s not as simple as that, of course,” he says. “The music business is a place for only the hardiest creatures, although they don’t tell you that at the time. But instead of ticking a box, or whatever, I’ve been able to keep striving for that perfect blend of my African roots and my Western influences.”

Audiences across Europe – Germany is an especially responsive market – and more recently in the U.S. would contend that he’s succeeded in his search. The UK hasn’t always been so supportive, although the two nights he and his ultra-accomplished band played as the opening act for Canadian singer-pianist Diana Krall at the Royal Albert Hall a few weeks ago by all accounts made Londoners appreciate what they’ve been missing.

“I’d like to play more in the UK,” he says. “That’s why I’m so pleased to have been invited to Celtic Connections – it sounds like an amazing event. Ultimately you can only put your ideas out and hope that they touch people in a way that they’ll remember.”