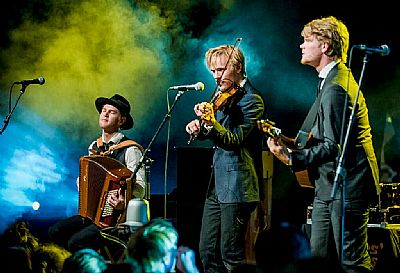 Teenage rebellions are meant to be risky, against the grain, shocking even. In the rebel’s guide to unsettling your elders, they don’t usually involve such destinations as Sydney Opera House or keeping company with leading string quartets and symphony orchestras.

These entries on his C.V. are, however, what resulted after, at sixteen, Ale Carr decided to see if he could take the traditional Swedish folk music he’d been playing since he was a child somewhere different.

The direction he went looking for led to Dreamers’ Circus, one of Scandinavia’s hottest properties, who made quite an impression on their unannounced debut as an opening act at Celtic Connections 2015 and return this year in a mouth-watering double bill with fiddle-cello partnership Alasdair Fraser & Natalie Haas.

“My parents were traditional musicians and teachers when I was growing up so it was natural for me to join them on gigs,” says Carr, who contributes clog fiddle, ukulele, acoustic guitar and double bass to the Dreamers’ Circus emporium of musical instruments on disc but mainly concentrates on cittern in live performance. “We dressed in costume and played this very traditional style, and I enjoyed it. At a certain point, though, I began to wonder if there might be anything else we could do with this kind of tune, something more contemporary. So I put this super-ambitious project together in my mind, a five or six piece band and, well, that didn’t work.”

A year or two later he met Rune Tonsgaard Sørensen, a violinist who, at six years older, was already shaping up to be a star in Denmark’s classical music firmament. The age difference prevented them from playing together at first but when they sat down and jammed on some of Carr’s teenage rebellion tunes, they clicked and formed a duo. And so they might have remained until one night in 2009 Carr went over to Copenhagen to play with another band, got in touch with Sørensen and set up a jam in a bar afterwards.

“There were other musicians there but they didn’t really get what we were doing,” says Carr. “Then this guy came in, listened, went over to the piano in the corner and sat down and played with us until about three or four in the morning. After that, we said, Let’s make this a trio. And here we are.”

The pianist, Nikolaj Busk, who comes from a jazz background, turned out also to play accordion and to have compositions of his own that fitted into the style that Carr and Sørensen had been working on, although the mesmerising, swirling melodic surge of Dreamers’ Circus’ music tends to develop from jam sessions.

“Nikolaj sometimes comes in with these vast, written out ideas but mostly we start with a melody and see where we can take it,” says Carr, whose Scottish surname is a construct created when his great grandfather, a doctor, changed his name from Carlsson to avoid confusion with another Dr Carlsson in the same village. “Pieces tend to have quite a long maturing process before we play them live or record them because they change every time we play them and we like to develop them to a stage where they have a lot of ideas in them but they also flow naturally.”

Contrary to possible expectation this spontaneous way of creating music worked very well when they tried it in a symphonic setting. Six months after the trio formed Sørensen was due to give his first concert at the Royal Danish Academy of Music. The programme included Mozart’s 5th Violin Concerto with a full symphony orchestra. In the third movement Carr and Busk joined Sørensen for a Dreamers’ Circus take on the cadenza and when the orchestra joined in at the end, the crowd went wild.

Further adventures followed. In 2011 Dreamers’ Circus became the first Danish-based folk band to play a full concert with a symphony orchestra, the ecstatically received 60 Minutes of Dreams, and their first album, A Little Symphony, released in 2013, featured a string quartet, a thirteen-piece brass ensemble and the Indian bansuri master Rishab Prasanna.

The collaboration that they’re most interested in following up is the one that saw Spanish dancer Selene Muñoz interpret A Room in Paris, a track from their second album, Second Movement, on film.

“Working with orchestras, in a strange kind of way, lets us be almost as free as we are as a trio because they cover certain notes and leave us space to be spontaneous,” says Carr. “So we want to do more of that but we really loved what Selene did on that video of A Room in Paris that you can see on YouTube and to do a full work with our constantly changing music and her fantastic movement would be really exciting.”