Anda Union - preserving tradition for the next generation 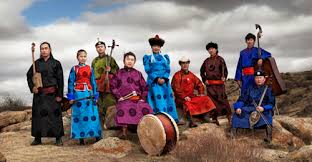 Some of the song subjects are universal. They could easily be from the Scottish Gaelic or Irish traditions, especially the songs about emigration and exile. Except, for Anda Union, being away from family and friends these days might mean living in a city instead of leading a nomadic life that’s governed by the seasons and travelling by bus, car or motorbike instead of herding sheep on horseback.

The group, which returns to Celtic Connections this weekend as part of a UK tour, are all based in Hohhot, known as the Blue City, the capital of Inner Mongolia. They don’t live in yurts, as their grandparents did, but a trip back home will reunite them with a way of life that, despite the arrival of mobile phones and social media, can still make use of old skills such as killing a sheep by closing off the main artery to its heart and letting it die relatively peacefully.

Maintaining their distinctive traditions and keeping their language alive are important to Anda Union since, as Mongolians living in Hohhot, they are outnumbered ten to one by Han Chinese. And without a resolve that has seen such victories as having all public signs made bilingual, it could be all too easy to fall in with the majority, as many of their contemporaries have. The nine-strong group are, then, on a mission to gather and unearth forgotten music and stimulate their culture so that it will be available for the next generation.

“By the time we began to realise how much our culture had changed it had already changed quite a lot,” says Anda Union’s leader by default, Nars, who grew up with his grandparents and spent summers in the grasslands nearly 1000 kilometres from Hohhot living in a yurt, the traditional Mongolian tent. “Nowadays so many people learn from Western music, they already forgot our roots. So for Anda Union the most important aim is to preserve our own songs.”

The songs Anda Union sing have been passed down the generations orally. Nars plays the morin huur, or horse head fiddle, and initially learned music from his grandfather after long days spent herding sheep. He went on to study at a music school where he met other members of the group. After completing his studies he played with a folk music ensemble in Hohhot but decided that he needed to find a way of playing traditional songs that would appeal to young people, not to lure them away from the hip hop, rock and pop that they were listening to but to make them aware of their culture so that they would value it as much as they do Western music.

To accompany their songs, which are sung using throat singing techniques and a style known as long song, reflecting the length of the notes rather than the songs themselves, the group play instruments such as the maodun chaoer (a three-holed flute), Mongolian versions of the lute and mouth harp and hand-made drums in addition to the morin huur, which pays homage to the horse, the most important animal in Mongolian culture.

Their sound has indeed found favour with young people in Mongolia. In Hohhot itself a number of bands playing Anda Union style music have sprung up and Nars has created a residential music school in his own house where traditional music skills are taught. It also can’t have gone unnoticed among impressionable youngsters that playing traditional music has earned Anda Union the status of musical ambassadors.

They’ve toured the U.S. successfully and appeared at the Womad festivals in Australia and New Zealand, as well as playing a successful run at the Edinburgh Fringe in 2012. One of Nars’ bandmates has also opened a bar in Hohhot that has live traditional Mongolian music seven nights a week – and this in a culture where concerts are a relatively new phenomenon, music being traditionally played at home to an intimate audience of family and friends.

If there seems to be something akin to Ireland’s Chieftains in the almost missionary approach Anda Union have taken to getting their music appreciated at home and abroad, the comparison expands to include an interest in collaborating with musicians from other cultures. There’s no sign of all-star album guest lists, Chieftains-style, just yet for Anda Union but on their travels in America Nars did enjoy improvising with bluegrass banjo players especially.

“I’m always thinking about working with bands from other cultures,” he says. “I love that idea. At the same time, though, there is a wealth of our own folk music for us to learn - so far our repertoire of songs is like a drop in the ocean.”