Runrig - last studio album not the end of The Story 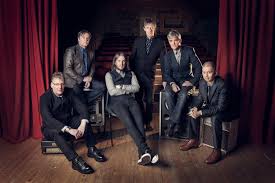 The message for Runrig fans is, the band that put Gaelic into rock and roll may have released its last studio album, The Story, this week but it hasn’t stopped making music. Indeed, with concerts at Edinburgh Castle and the HebCelt festival in Stornoway planned this summer, as well as three open-air gigs just announced in Denmark, the big events that have proved such a popular rallying point for the Runrig massive down the years are set to continue indefinitely.

“We’ve no plans to stop touring or writing,” says bass guitarist and founder Rory MacDonald, who with younger brother Calum has led Runrig from Highland village hall dance band to stadium-filling international attraction. “The decision to make The Story the band’s last studio album came about a few weeks into writing the songwriting process after I turned to Calum and said, These songs have a finality about them, a sense of wrapping things up. Calum agreed. We’ve always gone with our instincts so we went ahead on the basis that it would be the final collection of new songs from us as a band.”

Behind the decision lies a certain disenchantment with the way recorded music is consumed in the age of downloads and iPad shuffle programming. MacDonald freely concedes he is of the old school that listened to – and in his case made – albums that had a beginning, a middle and an end, and a running order that became almost as big a part of the listening experience as the music itself.

“I find it quite frustrating that individual tracks are taken from something that’s been worked on so that it hangs together as a collection and put into a wider selection that people can dip into,” he says. “My daughters do that so it’s obviously a generational thing but as a band we’re lucky that our fans still seem to want to buy physical copies of our albums. The other thing is that it’s been eight years since the last album and we’ve managed to exist without bringing out something new in the meantime so I’m not sure that albums nowadays are as big a part of a band’s life as they once were.”

In the beginning the MacDonald brothers were two music mad youngsters who absorbed the sounds that were all around them as they grew up on North Uist and later in Portree on the Isle of Skye. Their dad sang and there were regular ceilidhs in their own house and the houses round about. Radio Luxemburg added the Beatles and the Stones to the dance band music and folk groups they heard, such as Robin Hall & Jimmie MacGregor and the Joe Gordon Folk Four.

“We were always singing and pretending to play instruments before we got them and I remember Na h-Oganaich, the Gaelic folk group’s first album making a big impression,” says MacDonald. “But the road to Damascus moment was when Calum went to a wedding in Glasgow and heard Angus MacLeod, who was a popular traditional Gaelic singer with a big powerful voice, singing there. Calum came back and started writing a couple of Gaelic songs that same night.”

Generations of Gaels and Highlands and Islands-bred musicians and music lovers, to say nothing of Runrig’s wider rock following, have much to thank that moment for. Although it was some time before the MacDonalds plucked up the courage to let anyone else hear the songs they’d been working on behind closed doors, many of their creations have gone on to achieve the ultimate compliment for composers working in the Gaelic and traditional idioms and have passed into the tradition.

“We had a strong feeling about what we were doing from the beginning, says MacDonald. “But we never imagined for a minute that choirs would one day sing our songs at the Mod or that singers like Cathy Ann MacPhee, who has quite a few of them in her repertoire, would sing them alongside songs from the bardic tradition. Being put in that lineage makes us feel quite old but we have been writing for fifty years now so I suppose to a teenager today we do look ancient.”

To musicians such as Angus MacPhail of the popular Highland band Skipinnish, who are carrying on the MacDonalds’ tradition and have the brothers’ admiration and seal of approval, Runrig helped to provide a sense of identity. And to the huge numbers of Germans and North Europeans who have taken the band to their hearts, Runrig have clearly fulfilled a need.

“I’m not really sure why the German audience picked up so strongly on what we do,” says MacDonald. “It’s maybe something about the Gaelic melodies that appeals or they maybe see something in our tradition that they somehow feel they’ve missed out on. We’ll be touring there later in the year and with the sort of loyalty they’ve given us since we first went there in the 1980s, it really would be hard to stop going over there.”