Webb Wilder - he came from Mississippi 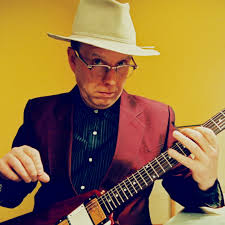 First there was John Webb McMurry. Then came Webb Wilder, a character that McMurry created to play a backwoods private investigator who also played in a band in his first film role. Before that, though, there was McMurry’s Aunt Lillian.

Any guitar-playing Mississippi boy in thrall to Elvis Presley and excited by the 1960s British invasion, especially the Kinks, the Stones and Small Faces, would have valued McMurry’s Aunt Lillian. The operator of a small record label, she captured for posterity prime tracks by bluesmen including Elmore James and Sonny Boy Williamson. She never tried to influence her nephew’s tastes but her knowledge did help him to appreciate his home state’s rich musical history.

“Mississippi is kind of a great place to come from,” says Wilder, who kept his film character’s name and went on to make enough good music of his own to earn an induction into the Mississippi Musicians’ Hall of Fame in 2011, joining heroes including Muddy Waters, B.B. King, Bo Diddley, Elvis Presley, and Jerry Lee Lewis. “You have to leave the state to make your mark in your chosen pursuit.”

Wilder left Hattiesburg, Mississippi for Austin, Texas in 1976, eight years after forming his first band as a fourteen year old.

“I’m sure it sounded awful,” he says. “There are no recordings, thank goodness, because I shudder to think about the noise we made. But we were lucky in that there was a local teen centre, where young bands got to play to an audience and it was a real proving ground. I think we might have played the Kinks’ I Gotta Move, which I covered on my latest album, Mississippi Moderne, even then because it was the B-side of one of their breakthrough hits, All Day and All of the Night, and it made a big impression on us early teens at the time.”

In Austin he and his childhood friend Bobby Field, later known as the respected record producer R.S. Field, honed their high energy blend of rhythm and blues and country twang. It was here that they met Steve Mims, a budding film director who gave Wilder his first shot in front of the camera.

“People often assume that I’d been a child actor, doing plays at school and that sort of thing,” says Wilder. “I was always dreaming of being in showbusiness but beyond being the class clown and doing impressions and imitating dialects, I had no acting experience. I did an acting course for one semester at college but it was all about acting for the stage and didn’t really interest me. I was much more interested in film and when the opportunity came, it was very much rough and tumble, learning on the job, making it up as you go along.”

His Webb Wilder character served him well, becoming a cult hero for late-night viewers, and he landed other roles, including a hotel manager in The Thing Called Love. Today, he says, he’s “eminently castable as some sort of old geezer”. He recently got called to audition for such a part, only for an ice storm to prevent his plane taking off from Nashville, which has been his base since 1982.

“I have an agent and I’d like to do more film work but I keep busy with music,” he says. His discography, ten albums in thirty years, doesn’t suggest a driven, prolific artist and he concedes that he’s never understood how people can release an album a year.

“I’ve never been the kind of songwriter who can sit down and produce work,” he says. “I’ll have a snatch of a tune come into my head and it’ll come out of my mouth in a certain way and become a song. Or I’ll think up a title and make something from that. It’s generally in my unguarded moments that ideas come. Sometimes when I co-write [Only a Fool from Mississippi Moderne was written with the legendary Dan Penn] an idea will blossom spontaneously in the room between the two of us but usually one of us will say, I’ve been thinking about this and the other person expands on it.”

His latest trip to the UK brings Wilder to Kinross, his first Scottish appearance since two gigs he played with his band in Glasgow in the 1990s, once at Barrowland supporting the Georgia Satellites and once at King Tut’s. This time he’s playing solo, something he found intimidating at first.

“When you’ve been used to playing in a band, you can feel a bit exposed standing there with just an acoustic guitar,” he says. “I used to think that to carry it off you had to be one of those dyed-in-the-wool folkie fingerpickers but I’ve come to enjoy solo gigs. I talk to the audience more and it’s more flexible than being with a band. I try and play what people have come out to hear as well as what I want to play, so we all get something from it.”