Bill Dobbins - the making of a jazz educator 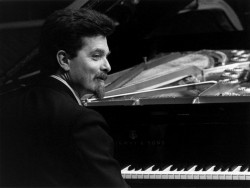 Bill Dobbins remembers vividly the first time he heard the music of Dave Brubeck. He was a fourteen year old student of classical piano who had never knowingly listened to jazz before when a friend from school dug out some of his father’s jazz records and said, “Listen to this.”

“This would have been in the early 1960s so the records I heard that day were all quite new at the time,” says Dobbins, who will guest with the Scottish National Jazz Orchestra this weekend as it pays homage to Brubeck. “I remember Erroll Garner’s Concert by the Sea was among those albums and there was some Modern Jazz Quartet and Ahmad Jamal, all of which I liked, but there were three Brubeck albums – Gone With the Wind, Time Out and Time Further Out – and something about them resonated particularly because the approach to harmony was similar to the harmony I was beginning to really appreciate in classical music. Plus, of course, I realised the musicians were improvising and that made it all the more exciting.”

Dobbins has spent much of his life passing on to music students the knowledge he went off in search of after that listening session. His own formal studies at Kent State University in Ohio didn’t include jazz because the jazz courses that now proliferate across the U.S. had yet to come to fruition but by looking at classical music from Bach to Satie in depth across the full range of ensembles and works his professors were in a way preparing him for the kind of detailed study of jazz that has earned Dobbins a reputation as one of jazz’s greatest educators.

“I quickly discovered that there wasn’t a lot of jazz music published the way you could find classical pieces to take home and play,” he says. “There was a two volume collection of Dave Brubeck transcriptions by his older brother, Howard, however, so I got that and worked my way through it. That was a major part of my development as a jazz pianist. I did actually meet Dave Brubeck later but it wasn’t until just a few years ago and I’d been playing his music for quite a long time by then, so my connection with him is that I’m a fan, pure and simple.”

From studying at Kent State, Dobbins went on to serve on the Eastman School in New York’s music faculty from 1973 to 1994 and was responsible for designing the school’s graduate and undergraduate jazz studies programme. While guiding students, many of whom have gone on to work under big band leaders including Count Basie, Woody Herman, Buddy Rich, Thad Jones & Mel Lewis, and Maria Schneider, he was also topping up his own experience in orchestras and chamber ensembles as well as jazz. There can’t be too many people who can claim to have worked with both Pierre Boulez and the great jazz trumpeter Clark Terry – or with the Kings Singers and alto saxophone master Phil Woods.

In 1994 Dobbins accepted an invitation to become the principal director of the WDR Big Band in Cologne, where he spent eight years before returning to Eastman. He keeps up the WDR connection with guest director work for the orchestra – he also fulfils this role with the multiple Grammy-winning Metropole Orkest in the Netherlands – and notes with some amusement that it was the European connection that probably resulted in him celebrating Brubeck with the Scottish National Jazz Orchestra.

“One of the drummers who guested with the WDR Big Band while I was there was Peter Erskine, who used to play with Weather Report,” he says. “And when Peter was asked to play on a programme of Weather Report music with the Scottish National Jazz Orchestra he suggested that I do some arrangements. Then shortly after that I was playing at Rochester Jazz Festival, where I’ve put together a series of solo piano programmes over the past few years, and doing my Dave Brubeck concert when I met Tommy Smith for the first time. That’s just how these things seem to all into place.”

Choosing a Brubeck programme is quite simple, he says, despite there being hours and hours of compositions available for selection.

“There are pieces that have become almost unavoidable and a lot of them were on those first few albums of his that I heard,” he says. “They’ve stayed popular for good reason – because they were well written and catchy – and the combination of those tunes and a big band seems like quite a potent recipe. I’ve really enjoyed the Scottish National Jazz Orchestra albums that Tommy’s sent over and I love the way they can move from one style of jazz to another so easily. So I’m looking forward to being part of this latest programme.”