Simone Gubbiotti - guitarist played himself into his own champions league 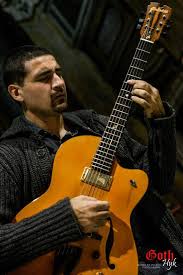 If things had gone by the original script, Simone Gubbiotti’s first trip to Scotland might have been on European Champions League business with A.C. Milan. The Assisi-born Gubbiotti was one of a group of young footballers from Umbria’s successful regional youth team of the late 1980s who were taken on by Serie A clubs. Some of his team mates joined Sampdoria and he and another player were selected by A.C. Milan. It was a dream come true. And then the dream turned into a nightmare.

“I wasn’t actually with Milan for all that long,” says Gubbiotti as he prepares to travel to Scotland having made a transition that possibly makes him unique. How many other footballers can you name who went on to become internationally regarded jazz guitarists?

Gubbiotti’s experience with Milan may have been overplayed. Although some versions of the story have him appearing in Serie A for the club, he tells the Herald that he’d only been there a few months when an injury to his right knee put him out of contention as far as the club was concerned and he returned to Umbria.

“The real story I have to tell is not so much about football as the power of music to save people,” he says. A series of events he prefers not to talk about left Gubbiotti, in his mid-twenties, severely depressed, suffering from weight loss and living in his car with his dog. Some ten years before, his father had bought him a classical guitar but he didn’t make much of it. He remembers it lying on his bed and him trying to coax music from the open strings but that was the extent of it. As he sat in his car, possibly contemplating the severest of remedies for his situation, he remembered that guitar and decided to go and get it.

He taught himself a few chords and then a friend of his father’s enrolled him in the clinics that Berklee School of Music in Boston runs every year at Umbria Jazz Festival in nearby Perugia. Gubbiotti knew nothing of Berklee. Or a local jazz festival. Or jazz, for that matter. But he went along at his father’s friend’s bidding and it didn’t go too well initially.

“I felt like an alien,” he says. “Everyone else had some sort of jazz knowledge and there were other guitar players there with electric instruments. I just felt stupid, sitting there with that classical guitar and those few chords I knew. I’d only been playing for five months but I discovered I could play by ear and this teacher, Jim Kelly, befriended me and put me into the second level.”

He was off but still not entirely at ease. His first experience of jazz in the flesh, an Ornette Coleman concert, had left him feeling completely lost. He needed something that spoke to him, or more accurately, sang to him. Enter Chet Baker, the trumpeter and singer who with his drug addiction, seedy connections and fall from matinee idol looks to human wreck could have taught Gubbiotti a thing or two about life being a mess.

“Chet Baker gave me the connection to jazz that I needed,” says Gubbiotti. “His style was very melodic. He didn’t play what I thought at the time was crazy stuff and I could follow what he was doing. I think maybe because he was also a singer, his trumpet playing had a vocal quality. I didn’t really listen to jazz guitar, with the exception of Jim Hall, whose style was also quite vocal, but I did want to listen to jazz because playing this music was taking me away from my troubles.”

Presently, music took him away from Italy. Because there was nowhere to study outside of the classically-slanted conservatoires, he decided to try his luck in America. He went to Boston to follow up the Berklee connection but didn’t have the money to study there and when his visitor’s visa ran out he returned home before, on a whim, he moved to Los Angeles.

“I didn’t know anyone there,” he says, “but I quickly met people and made friends.” He stayed in LA for three years, making connections with drummers Peter Erskine and Joe LaBarbera and with singer Al Jarreau. Now signed to New York-based Dot Time Records, he’s been capturing attention on both sides of the Atlantic with a style of guitar playing that speaks directly to the listener while also encompassing rich harmonic development and on his latest album, Resilience, conveying his own story of survival.

“It’s been amazing how music has helped me to turn my life around ,” he says, “and I hope that by sharing what happened to me I can give other people hope.”