Malcolm Holcombe - from Asheville to Nashville and back 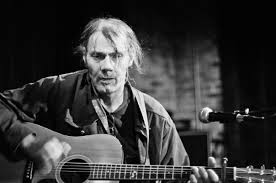 Steve Earle calls him the best songwriter he’s ever thrown out of his recording studio. Emmylou Harris didn’t have to be asked twice to contribute a backing vocal to his song In Your Mercy and Johnny Cash’s bass player, Dave Roe has been known to clear his diary at short notice to fly to his sessions because he would fight for the honour of working with Malcolm Holcombe.

The object of these and many another significant musician’s admiration - from swamp rock boss Tony Joe White to Béla Fleck & the Flecktones’ drummer, Futureman  - Holcombe has a more humble opinion of himself.

“Oh, I’m not unique in any way,” he says down the line from his hotel in Brighton in the same parched rasp that makes his singing of songs such as To Drink the Rain, My Ol’ Radio and Butcher in Town sound like the sort of wisdom and life experience that the great blues singers like Robert Johnson, Bukka White and Lightnin’ Hopkins passed down.

If you go to Asheville, North Carolina, the town Holcombe sought refuge in after a brush with the Nashville music industry left him reeling, you’ll find, he tells me, any amount of songwriters just like him scratching a living in the bars and back alleys. Which, judging from the quality of the steady stream of albums Holcombe has released in the past decade, suggests that there’s quite a seam of undiscovered talent in what Holcombe refers to as this “little beehive.”

Holcombe grew up just a few miles away, in the small town of Weaverville, and he remembers as a boy in the early 1960s going into Asheville on Saturdays to catch the Shindig on the Green, outside the court house.

“People would come in from the hills with their fiddles and banjos and doghouse basses and play tunes that probably originated in Scotland and Ireland,” he says. “North Carolina looks a lot like Scotland. That’s why I feel at home in Scotland – look out your window, it’s probably not much different from looking out mine – and it’s why the Scots felt at home when they settled in the Appalachians.”

If the Shindig on the Green’s general hubbub of musicians and celebrants sowed the seeds of his interest in music, then watching Earl Scruggs, of bluegrass idols Flatt & Scruggs, put his ear to the shoulder of his guitar as he sang You Are My Flower on television made Holcombe want to actively participate. The first time he followed Scruggs’ example he experienced, he says, a warm, calming sensation. It’s a sensation he’s savoured since in a life that’s had its share of troubles.

He taught himself to play on a neighbour’s guitar with a borrowed copy of Mel Bay’s guitar chord book that he says became too hard to follow after the first page. Having lost his mother in his teens and his father not long afterwards, he joined a band and played around Asheville’s bars. Alcoholism and drug addiction followed and although the chronology of his story, including the death, aged eleven, of a son who’d suffered from cerebral palsy, is foggy, what’s clear is that along the way Holcombe developed a guitar style that has the grooving momentum of those old blues guys who used to play solo acoustic guitars for dancing and a storytelling style that stops seasoned songwriters in their tracks.

For a time, after Holcombe had moved to Nashville and was being groomed for stardom - an unlikely proposition from all accounts – by Geffen Records, he was working in the kitchen of one of the Nashville venues where serious songwriters would try out their latest efforts before a critical audience. It would take some coaxing but eventually Holcombe would appear, wiping his hands on his apron, pick up a guitar and leave the whole room gaping with the intensity of his performance.

The attempt to groom him failed, although an album eventually “escaped” rather than being released and Holcombe retreated to North Carolina. There he met the woman who’s now his wife and manager, Cyndi, straightened himself out and with her help and support he just gets on with his job, as he sees it.

He has a fine stock of pithy, sometimes rural phrases to downplay this job and deflect from telling his own story. “Truth is stranger than publicity” is a new favourite and rather than describe his approach to the actual work of songwriting and finding those grooves that give his writing such momentum, he’ll tell you, “If you want to eat corn, you’ve got to get out the hoe.”

As his recent output will confirm, the hoe has been put to good use when Holcombe’s not out on the road that brings him back to Glasgow, a favourite haunt, with his long-time friend and guitarist Jared Tyler for company this time. Compliment him on the quality of his recorded and onstage work, however, and you’re likely to be told: “I’m just trying to be of service.”