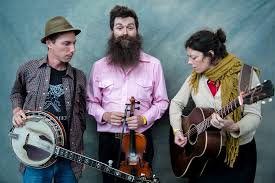 He’s the boy who ran away to join the circus and in a way Aaron Jonah Lewis is still running. His group, the Corn Potato String Band, is about to make two trips to Scotland on its latest, extended visit to the UK and while his colleagues, fiddler and guitarist Lindsay McCaw and guitarist and banjo player Ben Belcher, like to get back home to recharge their batteries every so often, Lewis would happily tour forever.

“Playing fiddle music is pretty much all I really want to do,” says Lewis down the line from Detroit, which is where he bases himself and impatiently kicks his heels between road trips. “But I understand that other people like to pace themselves differently. It’s just that I caught the bug. At high school in Maine I was playing classical violin and beginning to realise that I didn’t want to continue down that route. So I went travelling.”

On his travels he met a chap who turned out to be the catalyst for almost everything that followed. This guy – Eric – knew some people who were forming a bluegrass band. Did they have, Lewis enquired, a fiddle player? No came the answer.

So Lewis took off for Virginia, where he joined Special Ed and the Short Bus on their very first gig. Their name presently had to be changed to the Hot Seats, although not before they’d won a Herald Angel award at the Edinburgh Fringe in 2008. As those who know them from back then will verify, the circus analogy isn’t inappropriate. This was bluegrass with liberal helpings of Frank Zappa-esque mischief. Although by no means a kill-joy, Lewis fell heavily for the bluegrass element.

“I became completely immersed in, not just bluegrass but the whole gamut of Appalachian music, anything that’s old, really,” he says.

There’s a charming introduction to the Corn Potato String Band on their website that talks about them rescuing old-time fiddle and banjo music from the dust bins of history and of the three musicians being outcasts from society who are essentially unable to cope with modern life. The first part has some semblance of truth, although they are part of a considerable movement in the U.S. that shares their enthusiasm. One of the chief ways of comparing versions of old tunes and finding more of the same, however, is through that almost ever-present facet of modern life, the internet.

“We’ll use any possible means of discovery,” says Lewis. “There’s a whole community of people dedicated to preserving string band music. When I first got interested in it I used to dig up sheet music and try to learn from that but you don’t get the feel of the tune that way, you only really get the shape of the melody. So you need to ask people for help. The thing is, we’re as interested in Mexican string band music as we are in, say, ragtime and there’s a song on our new album, Andale Vamos, that we found on a Mexican compilation. It turns out that it’s in a dialect that most Spanish speakers won’t necessarily understand but we loved it and we had to learn it properly.”

Although you wouldn’t guess from hearing it, the new album, Put on Your Old Grey Bonnet, was recorded on that well-known American old-time music stronghold, the Isle of Jura. On one of their first trips to Scotland, once Lewis had hooked up Belcher and McCaw – both of whom he met through the aforementioned Eric (Belcher was and still is a member of the Hot Seats), the Corn Potatoes played a gig on Jura and discovered that their host, Giles Perring, had a recording facility on the island.

“We were really keen to make an album in the middle of a tour when there’s that momentum you get after playing a few gigs and the music’s really flowing,” says Lewis. “We liked Giles immediately we met him and Jura is a place where we feel comfortable. We thought we’d be able to focus on the music with no distractions, and so it turned out. We had to stop earlier than planned because Giles’ first grandchild was due to be born that week and he had to go off and see his daughter, but the recording worked well. It’s good to know that our sound holds true to the tradition even when we’re so far from the source.”