California Feetwarmers - swinging with the stars 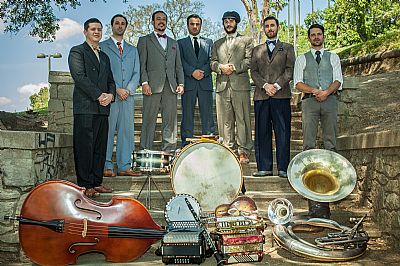 The tall gentleman listening closely to the music at the back of the Vibrato Grill in Los Angeles looked familiar. What, though, would Sir Tom Jones be doing at one of our gigs, thought the California Feetwarmers. When they plucked up the courage to speak to him, they discovered that the music they play, the ragtime, Dixieland blues and early swing, that came out of New Orleans around 1920, is right up Sir Tom’s alley and that he’s enough of a fan – and he has the influence - to get them rebooked at the club. After all the owner’s a friend of his, Herb Alpert.

Alpert didn’t take much, if any, persuasion (he’s a fan too) and the California Feetwarmers will be back at the Vibrato very soon, possibly with a guest singer. Or, if Sir Tom happens to be in proximity to any of the gigs on their UK tour this month, his promise to sing with them next time they meet might happen even sooner.

It’s just possible that Alpert recognised something in the seven-piece band’s DNA. The trumpeter-turned-singer-turned-record company owner – he’s the A in A&M Records – has family roots in the Balkans and it was the brass band music of that area of Eastern Europe that was partly responsible for the California Feetwarmers coming into being.

“Originally we were two different bands,” says trumpeter and spokesperson Charles de Castro. “There was one band that that played western swing, which in a way is jazz played on country music instruments in Texas, and there was the other band, Blasting Company, which specialised in Balkan brass band music. We actually spent quite a lot of time over in that part of the world learning and absorbing the music but what we and the other band really wanted to do was play together and play vintage jazz.”

Balkan music, it turns out, is not only good training for playing jazz, with its high technical demands, compound time signatures and melodic hairpin bends, it provokes a similar response among audiences. For a few years Blasting Company earned a living as buskers around Santa Monica and Hollywood and people would often come up to them and ask what kind of music it was they were playing. Much to de Castro’s surprise, people ask the California Feetwarmers the same question.

“I grew up listening to my parents’ Louis Armstrong and Chicago and New Orleans jazz records generally. It was their parents’ music, too,” he says.

“So I thought everyone would know that what we play is jazz but when we tell them, they’ll say, ‘Oh, I’ve heard other kinds of jazz and haven’t liked it but I like you guys.’ I suppose it’s because there’s a lot of music that comes under that jazz umbrella, some of it’s abstract, some of it’s like rock music but instrumental and with improvisation. What we play, for me, doesn’t require you to be a virtuoso. It’s not particularly easy to play and you have to be good but I like to think that people can sing it. It’s not about the soloists so much as the songs.”

Much of what the California Feetwarmers play comes together through a natural process. They don’t necessarily write out arrangements because, as de Castro says, they all know where they should be in the music. Sometimes it’s a slow process. There’s one track on their imminent new CD, Silver Seas, that they began working on when the two bands merged into one back in 2010 and it’s taken this long to get it to a quality they’re happy with. Other songs and tunes, however, come together very quickly indeed.

“Much as we love playing the classics, we also want to create our own music in the classic style,” says de Castro. “So a week before we went into the studio to record the new album we paired off and each pair had to come up with their own new composition. It worked really well and I think the original tunes are – I won’t say better – but just as good as the older material we’ve chosen. Having a goal, a deadline, can bring out the best in a musician.”

The California Feetwarmers have more fans in the music business than Sir Tom Jones and Herb Alpert. Grammy-winning blues singer-guitarist Keb Mo happened to be at one of the backyard parties that are one of the band’s staple gigs around Hollywood. Again, as with Sir Tom, they were aware of this chap listening intently and when he approached them afterwards and suggested they get together, they agreed without realising quite who he was.

“He was very modest and didn’t make a big thing of being a big blues name or anything,” says de Castro. “So we did the recording and a few months later he rang up and said, ‘We’ve been nominated for a Grammy, do you want to come to the ceremony?’ He’d obviously been before and the song – Old Me Better – didn’t win but just being invited along was like winning for us. And if someone like that thinks we’re good enough to be on his record, that’s a pretty good endorsement.”