Mike Mainieri - from swing era vibes to Steps Ahead 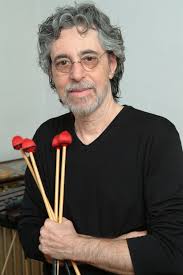 “It’s quite a stretch,” says vibraphonist Mike Mainieri of his era-spanning career as a jazz musician. Mainieri is the Scottish National Jazz Orchestra’s latest guest as they take the music of the band he formed in the late 1970s, Steps – later Steps Ahead - on tour this month.

If Steps had been Mainieri’s only achievement he would still have been responsible for more than fifty prominent musicians being given one of the greatest platforms of their careers over the band’s still-continuing history.

The late, great Michael Brecker delivered some of his most memorable tenor saxophone work with Mainieri. Brecker’s former sister-in-law, the wonderful pianist and singer Eliane Elias was newly arrived in New York from Brazil when Mainieri hired her as a twenty-year-old. There’s also a joking suggestion that Mainieri arranged marriages as well as music since keyboardist Rachel Z and her husband, drummer Omar Hakim are both Steps Ahead alumni.

Even Steps’ progression from an acoustic group of compact power to an electric band of full-on exuberance begins to pale, however, alongside the sheer longevity and variety of Mainieri’s own musical experiences. These encompass playing at the age of fourteen with the Paul Whiteman Orchestra, one of the most popular outfits of the big band era, performing as a tap dancer, featuring with proto-fusion band Jeremy Steig & the Satyrs, working with ill-starred singer-songwriter Tim Hardin, producing and co-writing with Carly Simon, and recording works by Copland, Bernstein and Ives.

“Paul Whiteman has become almost a forgotten figure,” says Mainieri down the line from New York. “If you mention his name to jazz musicians in their twenties and thirties they’ve no idea who he is. In his day, though, he was huge and to tour with him at that young age opened up a whole new world for me. We performed live on TV – at a time when there were only about three channels, I should say – and played on radio. It was great experience.”

After the Whiteman band, Mainieri joined Buddy Rich at the age of seventeen and for five years marvelled at the effort – and sweat - Rich put into making music every night. Then studio work, another disappearing facet of the music business, claimed him for a busy, twenty to thirty sessions a week. At the time he was also a grape farmer and was presently to become a record company executive – one who could not only make the music required but provide the cover art.

He formed Steps as a contemporary bebop band with an A team of fellow session musicians – Brecker, the late Don Grolnick on piano, bassist Eddie Gomez, and drummer Steve Gadd – and the group’s popularity developed firstly in Japan, whence early albums came at stiff import prices over here. With their signing to the Elektra Musician label their almost mythical status became more tangible and 1983’s Steps Ahead album, featuring Grolnick’s Pools as the opening track and with Elias and Peter Erskine replacing Grolnick and Gadd, became an instant must-have among young jazz listeners who had been hanging onto Weather Report’s every note.

Mainieri and Weather Report’s co-pilot Joe Zawinul were friends from the days when they used to play and hang out in New York clubs such as Birdland, later celebrated in one of Zawinul’s most popular compositions, and their respective bands shared personnel as well as a trajectory that saw Steps Ahead pick up the Weather Report baton in pursuing an electric jazz path.

“I met Joe not long before he died and he gave me a big hug and almost broke every bone in my body, he was so strong,” says Mainieri. “He said, We’re the last of the breed, meaning as bandleaders who brought all these players through our groups. I tried to tell him there were others, Chick Corea for one, but he wasn’t having it, and it’s interesting because I’ve done a few of these projects where big bands play Steps’ music and the directors are often guys who have grown up with Weather Report and Steps and they’re keen to explore these two bands’ music in an orchestral situation.”

The Scottish National Jazz Orchestra concerts will feature Steps Ahead “hits” such as the aforementioned Pools and Safari and Mainieri notes that SNJO director Tommy Smith has chosen some items from the period when Norwegian saxophonist Bendik Hofseth was in the group.

“In a way I wasn’t surprised because Tommy works with Arild Andersen and knows the Scandinavian scene really well,” says Mainieri, who will be touring Europe with another Steps Ahead incarnation following the SNJO concerts. “It’s always interesting when the orchestra director brings his own selections into these situations and just going over the new arrangements we’ll be playing in Scotland makes me want to get over there and try them out with the band.”