Fly - taking flight as and when 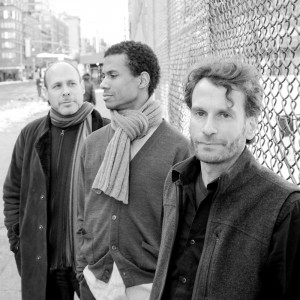 In the case of the trio who call themselves Fly and who are Glasgow Jazz Festival’s opening night mainstage guests, options one and three come into play, with heavy emphasis on option three.

Saxophonist Mark Turner, drummer Jeff Ballard and bassist Larry Grenadier are busy, in-demand musicians whose individual schedules can keep Fly as a band inactive for long periods. Indeed, the tour that brings them to Glasgow will be the first time they’ve played the Fly repertoire in eighteen months.

“The way things are these days, so many projects are booked so far in advance that unless we say, right, we’re going to have some Fly time at such and such a point, time can whiz past and we haven’t played together in ages,” says Grenadier, whose many credits include work with saxophonists Joe Henderson and Joshua Redman and singer Betty Carter as well as long service with pianist Brad Mehldau. “Fortunately, Jeff and I both now work with Brad and we speak to Mark as often as possible so we don’t lose touch, we just have to be realistic and see Fly as a side project.”

The trio formed in the early noughties. All three musicians are from California and they all moved to their current base, New York State, around the same time. Being exiles of a sort, they wanted to create something that was representative of their shared background and was different from the music they were playing and the formats they found themselves working in in their new home.

“We all grew up around the same music and there were all these elements that we could include and be open to taking wherever we wanted to take them, and we’re able to do that without talking very much among ourselves about them” says Grenadier. “It’s different now because everyone has access to the same material via the internet and where you come from might not influence how or what you play in the same way as before. I think California impacts on how we play as a group because of the landscape we’ve retained in our imaginations. Our music is often impressionistic. It unfolds quite slowly and despite the fact that we all live on the east coast, it reflects a west coast pace of life.”

Part of the reason for the slowly unfolding nature of Fly’s music – although they can play with urgency too – is the lack of a harmony instrument. For Grenadier, when a pianist or guitarist plays a chord, the listener hears, or even feels, that chord instantly, whereas a saxophone or double bass playing the same notes individually means that the listener experiences the chord over time. It takes longer to resolve.

“For a bass player in a saxophone, bass and drums trio – and I think this is the same for Mark – you have to make sure you’re playing something that’s clearly understood,” he says. “We’re very aware of the audience and we know that without them, there’s no concert. So although we’re essentially doing the same jobs as we’d be doing in other groups, there’s more responsibility in a trio. Everybody has to be on the top of their game so that we give the music what it needs to communicate.”

Being friends helps. These are all very experienced players but even so, there’s a certain reassurance that they can all take risks on the bandstand without being afraid of messing up.

“I do stuff in Fly that I wouldn’t necessarily try if I was playing with someone for the first time,” says Grenadier. “We’re comfortable together and that increases the possibility of us making music that we haven’t made before and giving the audience something they might not have experienced before. We want them to feel that we’ve created something for them personally.”

With just three albums to their name over the fourteen years they’ve been together, Fly can’t be accused of issuing product for the sake of it. Their record company, the German label ECM, is happy for them to record at their own pace and the trio like not being under pressure to release an album a year, as might be the case if they were a full-time touring group.

“We record when we feel it’s right and we feel ready to put new music out,” says Grenadier. “In some ways, the records feel like they’re part of the conversation. The three of us might not might not get together to play for eighteen months at a stretch but we tend to pick up where we left off.”