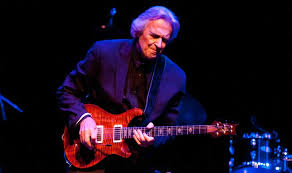 John McLaughlin is excited. At seventy four the guitarist says he should have passed the stage of pre-tour anticipation but the current edition of his band, the 4th Dimension, has a quality that McLaughlin has tried to instil in every group he’s led since the Mahavishnu Orchestra in the early 1970s and it makes him want to get back on the road. Right now.

“There’s a certain complicity that musicians can develop when they work together,” he says. “And that’s the greatest element a band can have. It gives the music more intensity at a collective level. It’s not every group that achieves this. Some of mine haven’t but Mahavishnu had it and Shakti too, and of course it helps that we get on as people too.”

As we speak McLaughlin has one more night at home in the south of France before he meets up with the Paris-based Cameroonian bass guitarist Etienne M’Bappe, Indian drummer-percussionist Ranjit Barot and English keyboardist-drummer Gary Husband for the tour that brings them to Edinburgh Jazz & Blues Festival this weekend. Down time isn’t really down time at all, he says, as there’s always a guitar near at hand and he never stops thinking about music.

“I sometimes think it’s a sad obsession that I have, and I know I’m prejudiced, but music is a marvellous thing. If you open the door to a church or a mosque or a synagogue, inside you only find people of the particular religion that worships there,” he says. “But if you open a concert hall door and go in, nobody cares about your beliefs. I honestly believe that music can change lives for the better.”

Music grabbed hold of the eleven year old McLaughlin back in Doncaster in the early 1950s. He’d been playing piano since he started school but it didn’t capture his imagination as did the guitar that got passed down the family from brother to brother. The brother who’d bought the guitar and quickly lost interest went on to become a chemical engineer and the one who passed it on to John became a marine biologist.

“They got PhDs and I got one GCE, in French funnily enough because it came in handy,” he says.

By the time he sat his GCEs, though, McLaughlin was already playing in bands, on his way to a career that has led to him working with one of his jazz idols, Miles Davis, and honouring others such as John Coltrane and Bill Evans through a musical style that has incorporated his love of flamenco and deep immersion in Indian scales and ragas.

Although he didn’t necessarily think so when, during the 1960s, he became a studio musician for an array of talents that ranged from the Rolling Stones to Engelbert Humperdinck and he sat between the squabbling Jack Bruce and Ginger Baker in the Graham Bond band bus, McLaughlin counts himself as lucky.

“I wouldn’t change a beat, one note, of my life,” he says. “I often say that, if there is such a thing as reincarnation, I’m going to come back as a singer because you don’t have to carry any gear around and you get all the money - and all the girls. But to be any kind of musician is a privileged life. Sure you have anxieties but they’re nothing in the grand scheme of things. You have to have the desire, though. My son plays drums – and he’s a good drummer – but he doesn’t want to be a musician. He just doesn’t have that madness that makes you spend millions of hours trying to perfect your craft.”

His current band was a unit just waiting to happen. He’s known Husband since he played with fellow guitarist Alan Holdsworth in the 1970s and M’Bappe and Barot are friends of old friends from opposite sides of the world.

“I met Etienne through Joe Zawinul about fifteen years ago and I told him at the time, We must play together. It took a while but we made it happen eventually, and Ranjit I first heard in India at the school Zakir Hussain’s father used to run. We played on a morning concert, playing ragas at breakfast time to a packed audience, and when I discovered that he played western style drums as well as having all the Indian theory – he studied with Vikku Vinayakram who was with me in the original Shakti – I immediately wanted to work with him. He played on my album Floating Point in 2008 but again it took a little time to get him in a band.”

Before they reach Edinburgh, McLaughlin has an appointment in Montreux, where he’ll judge a guitar talent competition in preparation for a week’s mentoring in November when he’ll give all the contestants practical advice on a career in music. He finds music competitions unnatural but as he says: “I have to give something back for all the good things that music has given me.”