Anna & Elizabeth - singers on a roll with Appalachian ballads 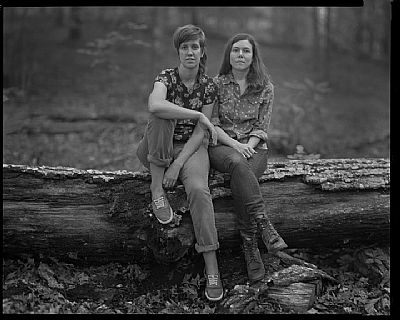 Anna Roberts-Gevalt is describing the first time she saw the crankies and emphasising that the crankies in question begin with a c. Roberts-Gevalt and her partner in folksong, Elizabeth Laprelle, are well aware of the Krankies with a k and the term fan-dabby-dozi from their first trip to Scotland last summer. Back then, the Krankies only seemed to follow them around, whereas the crankies, hand-turned paper rolls depicting the action in Appalachian ballads, actually went everywhere with them. They’re part of the Anna & Elizabeth show, quite a popular part in fact.

“They’ve become almost a show in themselves,” says Roberts-Gevalt down the line from Vermont as she and Laprelle prepare to fly back over the Atlantic to play Scottish dates including an appearance at the Southern Fried Americana festival in Perth this weekend. “I’d never seen one until I went to see this puppet theatre company here in Vermont. They had one that was eight feet tall and 1000 feet long and it told the story of a four-year voyage. I thought, what a great idea for illustrating some of the old songs we sing because the language in ballads can be quite archaic and we want the story to be clear to everyone.”

There’s also the question of duration. Some of the ballads that Anna & Elizabeth perform wouldn’t fit into the three-minute pop song format and they’ve found that audiences are more prepared to let the narrative unfold as the crankies, which Roberts-Gevalt  suspects might be descendants of the Bayeux tapestry, roll round.

“Having them has really helped,” she says. “Apart from being popular with audiences – they get their own requests – they help us to share how we feel about what’s happening in the song plot without having to act it out. So they’re quite a precious cargo. Each one takes a couple of months to make so we’re wary about flying with them. They come on the plane with us as hand luggage whenever possible.”

Planes were a long way off when the songs Anna & Elizabeth sing first came into being. Often they’ll collect them themselves from people well up in years who learned them from their grandparents, who in turn had them passed on to them down the generations.

“That’s one of the things that fascinated me when I became interested in traditional music,” says Roberts-Gevalt. “If a song has lasted all that time, it’s probably going to outlive all of us so it must be a good song. Elizabeth grew up surrounded by this music but I wasn’t aware of it until I was at college, studying classical music, and some people there began playing folk music. One day I bought a banjo and decided to go to the Appalachians to try and meet the people who’d kept this music alive and to see the landscape it thrived in.”

An internship in Eastern Kentucky over a couple of summers helped her to breathe in the Appalachian air and she fell in love with the area. Along the way she bumped into Laprelle, who being already knowledgeable about folk songs and fiddle tunes was able to gain access to the elders they’ve collected from.

“We’d go to parties and there would be lots and lots of fiddlers and banjo players and at this particular party there was one fiddle player who was really quite old, and everybody was in awe of him,” she says. “We asked if we might visit him and he was delighted that us younger folks wanted to hear him talk about his life and share his tunes. And that’s been the amazing thing for me. You don’t just get the tune or the words, you get to hear the family history, and people like Ginny Hawker, who is a great singer and a real hero to us, will call us up now and ask how we’re doing. Coming from classical music, which was quite separate from my everyday life, it’s great to hear music that’s obviously excellent but is shared so casually and generously, usually while the food we’re about to eat is cooking.”

As well as Ginny Hawker, an Appalachian tradition bearer who has recorded with Celtic Connections regulars Tim O’Brien and Darrell Scott, Anna & Elizabeth have earned the approval of esteemed folk singer and Grammy nominee, Alice Gerrard, who appears on their eponymously title second album and has made herself available any time they need advice.

“That’s the great thing about this music: you can become best friends with the top performers quite easily,” says Roberts-Gevalt. “Plus these songs might be hundreds of years old but I’m always intrigued by how so many of them are still so relevant that they could have been written yesterday.”