Steve Tilston - Liverpool, Lennon and Lowe and the Tilston connection 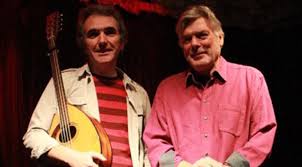 It could be a scene from a film. We’re in Liverpool at Beatlemania’s height, when everyone, it seemed, was playing guitars and the bus that’s taking Steve Tilston to school is reverberating to the sound of dozens of budding guitarists.

Suddenly the bus stops and the driver comes down the aisle to inform his passengers, in no uncertain terms, that he can’t concentrate while they’re all strumming away and orders them to stop the [expletive deleted] racket.

Some fifty years on, Tilston has had a brush with the film industry and it involved a Beatles connection. In 2005, Tilston, one of the folk scene’s finest guitar pickers and a songwriter whose work has found its way into the repertoires of Fairport Convention, Dolores Keane and one Bruce Springsteen, discovered that John Lennon had written him a letter in response to an interview Tilston had given to music magazine Zigzag in 1971. But the letter, which had Lennon’s phone number on it, hadn’t been forwarded until then.

A scriptwriter who was trying to make his breakthrough as a film director, Dan Fogelman heard this story and used it in Danny Collins, his 2015 comedy-drama which stars Al Pacino as an ageing rocker who receives a long-undelivered letter from Lennon and vows to give up his harem scarem ways.

“The film’s not about me,” says Tilston, whose show with fellow singer-songwriter-guitarist Jez Lowe features in the Acoustic Music Centre @ St Brides’ busy Fringe programme. “I was a bit concerned at first that it might be and I didn’t fancy that idea at all. But Dan Fogelman assured me that the hero of the film would be a fictitious character and I think he turned it into a nice film that uses the device of that letter very well.”

Aside from meeting Pacino and deciding against inviting him to his next gig, at Croydon Folk Club, Tilston received enough payment from the honourable Fogelman to pay off his mortgage and experienced increased interest in his music as a result of the film, although his profile, he says, has settled back where it was before, if maybe just a little higher.

He’s got over the frustration of not receiving the letter at the time, adding that his younger self would have had the front to phone Lennon and maybe invite himself round to show the Beatle some of his fingerpicking skills.

“It’s interesting because I remember Donovan saying that John Lennon was a Bert Jansch fan and you can hear that on the Beatles’ White Album,” he says. “So we would have had that in common, as well as both being from Liverpool.”

Jansch was the revelation for Tilston in the summer of 1965, when in a short space of time he saw Bob Dylan, Jansch and those other British folk scene heroes Martin Carthy and Davy Graham. Already a guitarist – he’d been diverted from the Beatles by hearing blues singer and picker Josh White’s Empty Bed Blues album – he began to develop at a considerable rate after the aforementioned gigs and by 1971, when Lennon responded to his comments about wealth changing musicians’ outlook, he was being feted as the troubadour du jour.

Whether Lennon or any of the Beatles ever heard Tilston’s superb, fingerpicking interpretation of I Feel Fine from around this time, we’ll probably never know. The major success he was tipped for never materialised, despite or possibly because of having Samuel Charters, a big wheel in the blues world, produce his second album and adding arrangements that didn’t sit with Tilston’s own musical vision.

Success doesn’t always have to be measured in finance, though, and Tilston isn’t complaining. Fairport Convention helped to give his Slip Jigs and Reels the ultimate compliment for a folk songwriter of having a song passing into the tradition. Bruce Springsteen has reputedly sung his Here’s to Tom Paine in concert, if not, alas, on an album, and Bob Dylan, after reading Tilston’s first novel, All for Poor Jack, emailed to say how much he’d enjoyed it and that he could tell this “Steve Tillotson” must be a good songwriter. Tilston gleefully accepted the typo.

His duo with Jez Lowe is a meeting of like minds from opposite sides of England, Lowe being a Geordie to the marrow. They’d often said hello in passing. Then five years ago they both happened to be in Cambridge, Massachusetts, played a few songs together and hit it off. Initially each accompanied the other on their own songs but now, much to Tilston’s surprise as a foresworn solitary writer, they’re co-writing – and with scarily coincidental results.

“I’d just started writing this song called Beacon Hill and I was telling Jez and he said, that’s funny, so have I,” says Tilston. “They’re different songs but we can slide from one to the other quite easily. Mine reminds me of Bert Jansch and I can imagine people saying, that’s pure Bert. If they do, I’ll say, Thank you.”