David Lyttle - How a cartoon soundtrack inspired a dynamic career 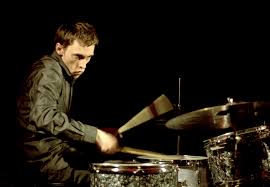 Every jazz scene needs a dynamo. In Scotland it’s Tommy Smith, directing the national jazz orchestra, nurturing young talent, leading a conservatoire jazz course and running a record label while maintaining an international career as a saxophonist and composer. Drummer David Lyttle is Smith’s Irish equivalent, if without the orchestral and conservatoire ties.

A self-starter who discovered jazz while watching Charlie Brown’s Christmas on television, Lyttle went on to play with Ireland’s greatest jazz export, the recently departed guitarist Louis Stewart, studied jazz first hand in New York on annual trips financed by gigs and knocked on doors to establish himself in the U.S. and Europe.

Rewards have come in the shape of a Best Jazz Act nomination at the MOBO Awards 2015 and having his latest album, Faces, described by Rolling Stone as 'one of the best, robust listening experiences you're likely to have all year'.

Lyttle’s early experiences in music were pretty robust also. His family played folk music “in the broadest sense,” he says, meaning Irish, Scottish and American songs and tunes were in the repertoire that they took to concerts and festivals on both sides of Belfast and the north’s divide.

“My parents were very active within the community and the whole family played music that was tailored to whichever audience we had,” says Lyttle, who played the drum associated with the Nationalist cause, the bodhran, or the one associated with the Unionists, the lambeg drum depending on the gig. “We played for a lot of visiting political and cultural figures at various events but essentially we were at the tail end of the variety era. We’d do a half-hour set between a magician and a comedian or something. It was good experience.”

At university Lyttle studied cello on a course that also had a jazz history module. One of his uncles had a huge jazz record collection but tended to keep his music to himself, so Lyttle was unprepared for the excitement he felt on hearing pianist Vince Guaraldi’s trio playing the soundtrack to Charlie Brown’s adventures.

“I was playing drums in church at the time and I played with some friends at uni for fun but I had no direction,” he says. “The Charlie Brown music made me go and research jazz and take the drums seriously.”

The Irish scene then didn’t offer many opportunities to play jazz, so Lyttle worked away by himself, listening to records and getting to, he felt, a reasonable level.

“I probably got a lot of attention I didn’t deserve because I was about the only jazz drummer around locally and people thought I was doing something special,” he says. “Was I special? I don’t know but the next thing that happened was incredible. I knew about Louis Stewart, of course, and back then if you’d told me I might get to do one gig with Louis, I’d have felt I’d made it. I’d become friends with Louis’ drummer and he’d decided to move to New York, so he recommended me to Louis and I got the gig, playing every weekend. It was a hell of a start.”

Word of the young guy – he was still in his early twenties – who was playing with Louis Stewart in Dublin began to spread and Lyttle, who’s not afraid to hustle for work, organised gigs for himself and musicians from this side of the Irish Sea. Tommy Smith was one player Lyttle invited over and the enterprising London-based American bassist Michael Janisch was another. These were birds of a feather.

Between this and Lyttle’s regular visits to New York, where he took lessons from some of the top players, it was all building. His next step was to release an album, which he put out on his specially formed label, Lyte, now home to releases by former Sting and Jeff Beck keyboardist-pianist Jason Rebello, former Jazz Messenger, saxophonist Jean Toussaint, teenage swing guitar sensation Andreas Varady, and American drummer Ari Hoenig.

Another Lyte Records artist, saxophonist Tom Harrison, is in the trio, with bassist Conor Chaplin, that Lyttle’s bringing to Scotland this week in a welcome return following the drummer’s outstanding appearances here with Michael Janisch’s band some years ago. Not surprisingly for a musician who gets things done on a practical level, there’s a pragmatic attraction in playing in a group with no piano - the vagaries of the pianos available on the jazz scene being a long-term bugbear.

“We all fit in the one car, too,” says Lyttle. “It’s a musical preference as well, though. I’ve grown to like the space having no chords leaves and the three-way interaction between the musicians. It can be a challenge writing strong, interesting melodies so that the music stands up without harmony but I’ve worked in trios a lot and if you listen to Branford Marsalis or Sonny Rollins’s trio records, it can sound really great.”