Sam Outlaw - surrendering to the country cause 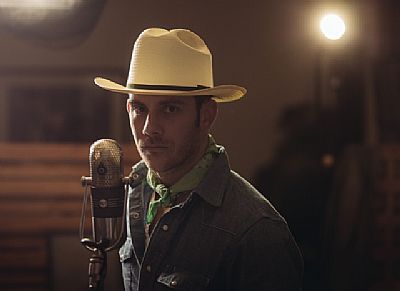 Sam Outlaw had everything. He was in his early thirties, earning good money in advertising, had a beautiful girlfriend, a nice car and a smart apartment in Echo Park, Los Angeles. Some might call it living the dream. It wasn’t Outlaw’s dream, though.

So he ditched the job – but kept all the other things – and concentrated on what he’d been doing in his spare time, country music. He’d only been playing in downbeat bars to ten people and didn’t think he was particularly good but it was the thing that got him excited. Besides, someone else whose opinion counts in the music industry, thought Outlaw was good.

And that’s how he came to have his first album, Angeleno, produced by Ry Cooder.

Outlaw (it’s his mother’s maiden name) still can’t believe that Cooder was willing to come out and gig with his band to get familiar with Outlaw’s songs or that the beat-up old Volvo that parked outside his apartment contained a legend who presently filled his living room with guitar sounds he’d heard on records for years.

“It felt kind of weird to have Ry Cooder emailing me to suggest he come out on those gigs and it felt even stranger to have him arrive at my house to rehearse,” says Outlaw, who makes his Scottish debut at Glasgow Americana festival this weekend. “But when we went into the studio to make the album everything was so relaxed and natural and I guess that’s why Ry’s such a great producer: he knew exactly what to do to have me and my band ready to make the best job of these songs.”

Outlaw is a late bloomer. He grew up in California with a jazz loving father whose liking for western swing revivalists Asleep at the Wheel sounds endearingly obsessive and a mother who listened to classic pop and rock radio. As a result, when his school mates were listening to the pop music of the day, Outlaw’s own tastes were for the Everly Brothers, the Beach Boys and the Beatles.

When Britpop arrived, he fell in with the trend, loving Oasis, Radiohead, Blur and Travis. The song that got him started as a songwriter and guitarist, however, was Don McLean’s American Pie, which he learned for a school assignment at sixteen.

“I can still remember all the words, all seventeen verses or whatever, which can be quite annoying for anyone who’s in the car with me and it comes on the radio,” he says. “It was a good first song to learn on the guitar because it has more than three chords and I started using them to write songs along Britpop lines, but with my own dumb lyrics about some girl at school or something.”

He was working in advertising, very successfully, when country music entered the picture. Off ill one day, he tried to cheer himself up by switching on the television and came across a programme about the hundred best country singers. He can’t remember much about the others but the next day, feeling better, he went out and bought Emmylou Harris’ Pieces of the Sky and a George Jones compilation.

“I’d love to be able to say that I grew up in South Dakota driving around in a pick-up truck listening to Randy Travis but apart from my dad’s fascination for Asleep at the Wheel there’s no big country music thing in my background,” he says. “I just heard George Jones and Emmylou by accident and flipped.”

His local music shop pointed him towards a pedal steel guitar player and with the rest of the musicians drawn from his church band he played his first Sam Outlaw gig at a free outdoor event in 2009. There was, he says, no buzz about a new country music sensation until the woman who is now his manager heard what Outlaw thought was the worst gig he’d ever played, in a crummy bar in Nashville in 2014.

On the morning after this thirtieth birthday he’d woken up with a hangover and realised he wasn’t happy working just to make money. Suddenly, two years later, as a result of meeting Ry Cooder’s son, Joachim and asking him to play drums on some demos, he had Cooder Senior offering to produce his first album and an Australian tour with Justin Townes Earle on offer.

“Some people might think I was crazy to go from having a successful, ten-year career to starting on the bottom rung in a precarious industry,” he says. “I didn’t tell my boss that I was taking time off to make an album with Ry Cooder but when I called my wife, who was the girlfriend in the nice house, nice car scenario, and told her about the tour, she said, Go for it. She believes in my song. Ry Cooder believes in my songs. So I figure, I should believe in them too.”