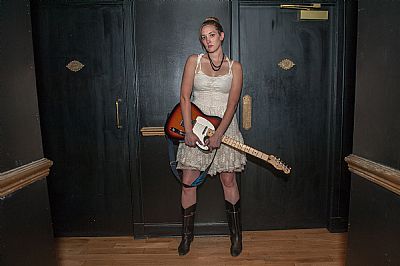 Hannah Aldridge is speaking about the Muscle Shoals effect. A town in Alabama with a population of some twelve thousand, Muscle Shoals became an unlikely home of the hits in the 1960s and 70s through its Fame studio and, later, its rival, Muscle Shoals Sound capturing a particular groove.

Soul stirrers Arthur Alexander, Percy Sledge and Aretha Franklin helped to establish a reputation that the Rolling Stones, who recorded Brown Sugar there, Bob Dylan, Paul Simon, Rod Stewart, Dire Straits and many others tapped into.

Aldridge grew up in Muscle Shoals, where her father, Walt, worked for seventeen years as a session musician, producer and songwriter (he’s written dozens of hugely successful songs for country singers including Ronnie Milsap, Barbara Mandrell and Travis Tritt) and although she’s lived in Nashville for around half of her twenty-eight years, she says that she can’t help the Alabama town creeping into her work.

“I got to hang around after school in the studio where my father was working and there’s an influence, maybe through osmosis, from those days,” says Aldridge who returns to Scotland to play gigs in Edinburgh and Glasgow this week. “But there’s also a particular style of Muscle Shoals in what I do. I grew up very religious, in the Church of Christ, and they didn’t allow instrumental accompaniment to their singing. Everything was sung a cappella and that shaped my singing quite a lot. I think it helped, too, in that I was able to pick out parts and harmonies and find the note I was looking for without prompting.”

Her church upbringing didn’t lead Aldridge down the path of righteousness, as she readily concedes. She’s lived a life. She’d been married and divorced by her mid-twenties and before that she was apt to act up and be far from a model citizen. That’s all behind her now – she has an eight year old son who’s given her a sense of responsibility – but her tendency to push the limits of what can be achieved in one lifetime has given her material to draw on in her songwriting.

She jokes about making sure that she leaves her audience feeling depressed but what she’s really trying to do is let people know that they’re not alone in their thoughts, not the only ones who feel unsure of themselves or are facing up to things that scare them.

“It’s important to me that I write in a way that speaks to women, and men, directly,” she says. “I’m not much of a storyteller so the things I write about generally have to have happened to me. Write about what you know is the best advice for any writer and even the songs I write that have more of a storytelling quality have to ring true to me.”

She wasn’t always quite so honest in her songwriting. When she went back to Muscle Shoals to record her first album in 2014 she had an all-star team of musicians, including legendary Memphis songwriter and keyboards player Spooner Oldham, and her father in charge of production.

Her marriage was heading for the rocks and she found herself outside a pawn shop, considering pawning her wedding ring. A song came out of that. Another, Parchman, came out of her thinking about a beaten wife who fights back and ends up on death row. These and another raw song called Howlin’ Bones were much closer to what she wanted to say than the songs she’d recorded. So she scrapped the album, started again and created Razor Wire, an album that is as compelling as it is dark.

“Having a dad who has a basement full of awards is kind of intimidating,” she says. “In the studio I felt like I was biting my tongue a lot, not saying what I felt. It reminded me of being back at home when I was younger and I wouldn’t want him to hear me playing the piano because he worked with some of the best musicians around. At the same time, my dad taught me by example what the standard is for a great song and I really respect him for that.”

It’s too early to say if she’ll pass the songwriting gene down from her father to her son, Jackson, but he knows what his mother does for a living and although she’s been out on the road gigging regularly since he was born, they’re never apart for too long.

“I know how long I can bear to be away from him and even during a European tour I’ll take a break, fly home for a week and come back over,” she says. “It’s amazing how technology has advanced even in his lifetime, so we keep in touch all the time. One of the best bits about touring, especially in Europe, is the history, and I’m able to show him all that through facetime while I’m following my dream.”