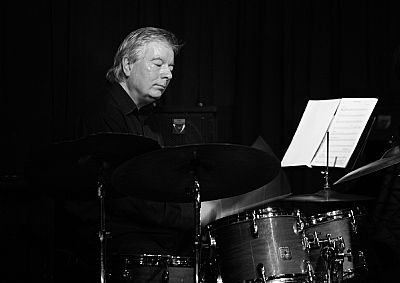 There can hardly be a jazz musician or a jazz listener in Scotland whose life has not been touched in some way by the endeavours of Bill Kyle, who died suddenly on Monday.

Bill was a tireless advocate for the music, giving countless hours to playing, organising and nurturing musicians and his influence and friendships gained through jazz extend across the world.

On the evening following his death, the club he ran in Edinburgh from 2005, the Jazz Bar, hosted its regular Monday big band session so that friends could pay their respects. Even in his absence this was typical Bill. The band featured musicians in their 20s alongside others who are well into their senior years, in keeping with the venue’s advertised “cool clientele – from 18 to 80”, and if ever anyone embodied the show must go on spirit it was Bill Kyle.

He was born in Dunfermline and there was already one jazz musician in the family when Bill took up the drums. His older brother, Jim, played tenor saxophone, specialising in big band music (another reason why Monday was so apt) and was the legendary Scottish bandleader Tommy Sampson’s trusted tenor for twenty years before dying tragically early in 1988.

Bill started out in pop bands in the mid-1960s, playing with Dunfermline’s Ambassadors among others, but by the time he moved to Glasgow a few years later he was a jazz devotee with a particular fondness for Tony Williams, the drummer who had joined Miles Davis at the age of sixteen.

While working in computer training with IBM, Bill became the consummate jazz gig fixer. This he remained for the rest of his life. He was absolutely committed to the basic tenets that musicians need to play to develop and a jazz scene needs activity to thrive.

In 1971 he and bassist Graham Robb formed a band, Head, in the jazz-rock style that Miles Davis and Ian Carr’s Nucleus were then pioneering. With typical Kylesque enterprise Head entered and won the Best New Band competition at Dunkerque Jazz Festival. They went on to record three albums, the impolitely titled GTF, Red Dwarf and Blackpool Cool. They also toured extensively, appeared on radio and television and collaborated with the former Cream bassist, Jack Bruce.

By this time, Bill had gathered three like-minds, the guitarist and later Jazzwise magazine founder Charles Alexander, Edinburgh-based pianist Jack Finlay and bassist Ian Croal. Together they formed Platform, the first jazz organisation to gain Scottish Arts Council funding. After an initial mini-tour by the hottest London group of the time, Major Surgery, Platform went on to promote hundreds of concerts across Scotland. Bill was involved in many of them and had a fund of tales about visiting stars including Miles Davis, Mahavishnu Orchestra and Art Pepper.

Following a return to more straightahead jazz with the hugely popular sextet he co-led with trombonist-arranger Brian Keddie, Bill’s work in computing took him to New York for a year. There the gigging continued (he also took lessons from his idol, Tony Williams) and the ear for talent that had brought saxophonist Gordon Cruickshank into Head and had seen Bill finance the teenaged Tommy Smith’s first recording in 1983 found more collaborators, including the vibes virtuoso Joe Locke.

Bill Kyle’s New York Jazz (later Atlantic Bridge) pitched Locke and various other Stateside finds alongside Smith and other home-grown talents and became a regular touring outfit for a few years after Bill returned, first, from New York and then from a five-year spell working in London. Back in Scotland, he organised a jazz festival in brother Jim’s honour in his home town for a couple of years in the late 1980s-early 1990s, bringing London-based players including great Scots, guitarist Jim Mullen and the late saxophonist Bobby Wellins, to Dunfermline.

With his successful hi-tech IT business operating in Edinburgh Bill became involved in further jazz endeavours including, briefly, the Scottish Jazz Network. Through Edinburgh Jazz Projects he helped to programme gigs by London-based players and local musicians in the Tron bar’s basement and he played regularly, with his latest young finds in tow, in Cellar No 1 in Chambers Street until its management sold out to an operation that carried out a major upgrade.

Bill’s dedication to finding a replacement venue in extremely trying financial circumstances before arriving back in Chambers Street was heroic. His determination that the show must go on resulted in him moving the programme he’d already booked to nearby Cabaret Voltaire but it would take three years, a search through dozens of potential premises, and the support of anonymous financial backers to get what was Cellar No 1 and is now the Jazz Bar up and running.

Even a programme that saw the venue open 364 days a year with BBC broadcasts of visiting stars including Ravi Coltrane and a minimum of three gigs a day (five on Saturdays) couldn’t contain Bill’s promotional drive. When he wasn’t in position at the end of the bar, enthusing over what was happening on stage, he was invariably on that stage or running his Bridge Music events elsewhere. In the face of public funding apathy, he began a programme at Glasgow Art Club that offered the Jazz Bar’s Wednesday guests a Thursday gig and ran until June 2015.

August at the Jazz Bar found Bill hosting some two hundred Fringe gigs – and insisting on finding an alternative space for around a dozen of them when his club was inundated with raw sewage from premises below in 2010.

Through it all Bill found an endless stream of musicians to champion. The Jazz Bar won numerous awards – none more pleasing than Downbeat Jazz Magazine naming it one of the world’s top jazz venues – and Bill himself was listed in John Chilton’s Who’s Who of British Jazz.

This was the least he deserved. Just weeks before he died, he had launched yet another series of gigs, twice weekly promotions at Swing in Glasgow, and he was always open to the Jazz Bar providing the Edinburgh stopover for touring bands.

Over seven nights in September 2015 Bill arranged for a team from Napier University to record twenty-three of the acts who had appeared most regularly over the Jazz Bar’s first decade. It took over a year to appear and the 2-CD set that resulted was never intended as an epitaph but it stands as a fitting tribute to a man whose selfless dedication to making jazz happen knew no limits and whose death leaves a massive gap in the jazz world.

He is survived by his wife, Mary Ann, daughter Edith and sons Andrew and Lewis.