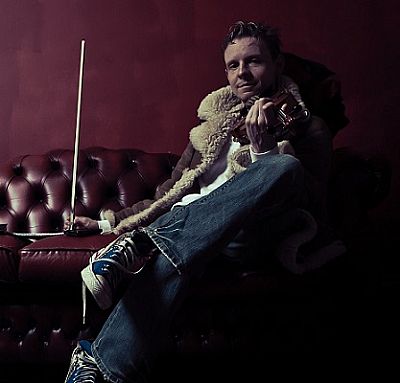 There’s a coded memo to himself in the title of the book of tunes that Adam Sutherland will be launching as part of the Scots Fiddle Festival in Edinburgh’s twentieth anniversary celebrations this weekend. The book is Sutherland’s first and its “Volume One” status is intended to ensure that more tunes will be forthcoming as he emerges from a period of demotivation.

“I made my first solo CD, Squall, in 2013 and the intention at the time was to take that band and that music out on the road,” says the fiddler from Errogie on the south shore of Loch Ness. “Then other things took over, including Treacherous Orchestra, and I began to find that I was able to turn up for work, no problem, when I wasn’t the driving force but I couldn’t get going when it came to my own projects.”

Several things have enabled him to turn this situation around, one being the Nae Plans duo Sutherland formed with keyboards player, flautist and singer Hamish Napier and another being the more recent experience of working with Glasgow-based instrumental juggernaut Fat-Suit.

Sutherland was enlisted to play as part of an eight-piece string section for one night only on Fat-Suit’s launch gig for its latest album, Atlas, but he was elated, if also sometimes distracted, to be among a team of, as he says, “such mighty players”. Speaking almost a week after the event, he was still clearly buzzing from an experience that kept him on his toes musically.

This was also the aim in setting up Nae Plans where, as the name suggests, neither Sutherland nor Napier has a clue what they are going to play when they walk onto the stage.

“It’s like a pub session in a way,” he says. “You never go into that situation thinking, I wonder what we’ll play today. The running order just happens and it’s usually good fun and sociable, whereas when you add an audience with expectations to the equation it can be liberating yet also terrifying. We wanted to get away from the possibility of going out and playing the same repertoire in the same order every night and it can bring out the best in you as a player. It can also go horribly wrong but mostly we’ve come through unscathed.”

Not only is Sutherland launching a book of tunes as a result of his turnaround, he has set up his own travelling school of fiddle, which focuses on creativity, tune writing, technique and fun. Perhaps with the tune writing aspect of these workshops at the back of his mind, he has also entered a new phase of prolific composition.

One of his recent compositions, The Wizard, is dedicated to the recently departed Angus R Grant, fiddler with Shooglenifty, who along with sonic experimentalist Martyn Bennett arrived on the music scene just at the right time for Sutherland. One of a number of now prominent fiddle players, including Duncan Chisholm, Bruce MacGregor, Iain MacFarlane and Sarah-Jane Summers, who were taught by the late and inspirational Donald Riddell, Sutherland was a teenager whose interest in the fiddle was mocked by many of his peers until Grant made a telling intervention.

“When he died a lot of the obituaries mentioned that Angus had made playing the fiddle cool, and that’s absolutely right,” says Sutherland. “Shooglenifty and Martyn Bennett became beacons of hope and coolness for me, and everyone of my generation was a massive fan of Angus.”

Tunes come to Sutherland in various ways, sometimes unbidden and almost fully formed, but most recently they’ve had a habit of invading his dreams or arriving at that point in the sleep pattern when, he says, his mind offers them an empty vessel to float into and he has to wake up and grab his mobile phone.

“I have to record these ideas for fear of losing them, so I’ll sing them into my phone,” he says. “There are other times when I’ll sit and just make any noise at all with my fiddle and see what develops but melodies are my absolute favourite area of music.”

The melodies that made up Squall will be reactivated and developed further at the Scots Fiddle Festival when Sutherland and the band that recorded the album, with a couple of additions, headlines Sunday’s closing night concert. Drummer Iain Copeland, guitarist Marc Clement and bassist John Spiers will be joined by Hamish Napier (keys) and Glasgow-based American session percussionist Steve Forman as Sutherland appears at the festival under his own name for the first time.

“I was always aware from my teenage years onwards of the Scots Fiddle Festival being a big event on the calendar,” he says. “I’ve played on it with other groups, Session A9 for example, but to be chosen as a headliner, especially on its twentieth anniversary is a real honour, and I’m really looking forward to putting the Squall band back together, Blues Brothers-style.”