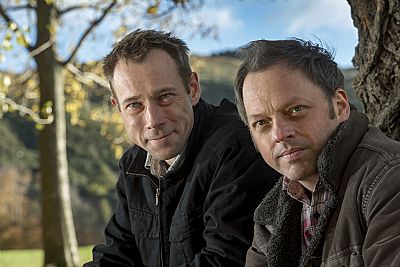 Fraser Fifield wasn’t to know when he began playing the chanter as a schoolboy in Aberdeenshire that it would open the door to much more than playing the Highland bagpipes.

Naming the instruments that followed – various whistles and saxophones and the Bulgarian kaval, or end-blown flute – only hints at how Fifield has used his training on the pipes as his passport over the past twenty years as a professional musician.

Leaving aside his crack that these twenty years are just an extension of the year he took off after studying music at Strathclyde University, Fifield has developed into the kind of player who can make himself at home on any continent.

The past two years alone have seen him working in India, Dubai and the U.S. with the esteemed Indian percussionist Zakir Hussain, whose work with guitarist John McLaughlin in Shakti and on the Making Music album with McLaughlin, Indian flute master Hariprasad Chaurasia and Norwegian saxophonist Jan Garbarek was already very familiar to Fifield. Before that, he had collaborated with Bulgarian musicians Nedyalko Nedyalkov and the late Georgi Petrov on his album Traces of Thrace.

There’s also the small matter of the two CDs Fifield has recorded, but has yet to release, as part of a Creative Scotland-funded trilogy that took him, first, to Mumbai then to Buenos Aires to work with Indian and Argentinian musicians. The final part of the trilogy is likely to take him to somewhere in continental Europe or perhaps Senegal, a decision he will have to make early in 2017.

“Piping never leaves you,” he says. “It’s kind of a blessing and a curse. You develop a way of hearing things totally through the bagpipe filter so that your training on the pipes informs everything. It’s the bedrock of everything I do and there’s a certain dexterity in the fingering that you can apply to the whistle especially. I’ve sometimes found myself teaching the whistle at workshops and wanting to tell students to go away and learn to play the pipes first but you can’t say that to someone who’s only come to a class for an hour or two.”

Fifield’s initial experiments beyond his piping upbringing were mainly within the Scottish folk scene. He played with champions of the north-east tradition Old Blind Dogs and in Glasgow-based singer Mick West’s band where a certain jazz influence and freedom within the arrangements allowed him to flex his improvisation muscles on whistles and saxophones.

“I wouldn’t say I transferred piping technique to these instruments or tried to get the sound of the pipes into them,” he says. “There’s something in the phrasing and musical language I use, though, that means that my improvising, even today, draws on my early experiences with the pipes.”

Not long after he left university Fifield ran into someone he’d been hearing about back in Aberdeen, guitarist Graeme Stephen, at a music course held in Glasgow by the esteemed American music hothouse, Berklee School of Music in Boston’s outreach team. He and Stephendidn’t play together at the time but shortly afterwards a slot became available at short notice on BBC Radio Scotland’s Live at the Lemon Tree Friday lunchtime programme in Aberdeen and Fifield was asked if he might step in to fill the gap.

“I immediately thought of Graeme and got in touch,” says Fifield. “We cobbled something together to fill in for fifteen minutes and we’re still playing together twenty years later.”

The duo they formed that day has expanded and contracted through the years, with various drummers, percussionists, Bulgarians (the aforementioned Nedyalkov and Petrov), a Brazilian bassist (West Lothian-based Mario Caribe) and a Northumbrian fiddler (Peter Tickell) adding their sounds and metres. The album Slowstream featured Fifield, Stephen and the Aberdeen-born, now Nice-based drummer Stu Ritchie and another, Stereocanto included Fifield’s sister, Vicky on strings.

It’s long been a running joke between Fifield and Stephen that they should take their folk, jazz and beyond repertoire on a Christmas tour and this year they’ve finally put one together.

“Our sound over the past few years has developed to the stage where, between the two of us and the various loops and delay pedals we use, we can make quite a full sound,” says Fifield. “It certainly doesn’t feel stripped down to me and knowing each other for as long as we have also helps a lot.”

They don’t talk much about actually making music. It tends to happen spontaneously onstage.

“If we do talk about what we’re going to do, it tends to be in abstract, humorous ways,” says Fifield. “We never play anything the same way twice and we’ve reached the stage where we’re loose enough to make eye contact for – oh, I don’t know - a whole five seconds. It’s familiar but also new every time and I enjoy that aspect of playing.”