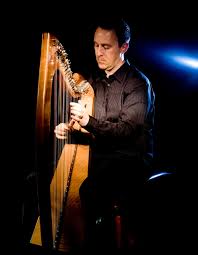 Michael Rooney never meant to become a harp player. By the age of ten the county Monaghan native was already proficient on the tin whistle, the fiddle, the piano and the concertina. He didn’t need another instrument vying for his attention. His father, however, had other ideas and, as Rooney mischievously tells the tale, it involved bribery and corruption.

“My younger sister was four at the time,” says Rooney, who returns to Scotland as one of the guests at the upcoming annual Jimmy McHugh Memorial Concert in Glasgow. “Dad wanted her to play the harp, so he promised me ten pence a day if I’d go along with her to harp lessons and make sure she kept up with her practising.”

The end result of this child-minding was that Rooney himself came to like the harp and learned to play in tandem with his sister, although he quickly overtook her and became very adept. Not that he told anyone, least of all his school friends, and as he developed his other enthusiasm – Gaelic football – and got picked to play for the school team he was pretty sure that the last thing his team mates would have been impressed by was news of his musical accomplishment.

“It’s funny in a way,” he says, “because in the seventeenth century, when the harp was really in its pomp, the players were almost exclusively male. You think of people like Turlough O Carolan, the blind harper who travelled the country composing music in his hosts’ honour. He’s one of the great figures in harp history. Not long after that the harp more or less died out and when it was revived later it became associated with song accompaniment and women performers. I was more interested in playing tunes.”

In his teens, when he took his harp along to pub sessions Rooney could sense the musicians wincing.

“It was almost as if they were cowering in anticipation of me playing Danny Boy or something,” he says. “Once I’d played a few reels or hornpipes they’d be more accepting but for quite a long time the only male role model was Derek Bell of the Chieftains and the harp’s still largely regarded as a female preserve.”

At Queen’s University in Belfast during the 1990s Rooney became seriously interested in composition. He’d already written tunes of his own in the traditional style while also competing in – and winning – harp championships. He went on to become senior All-Ireland champion and has won the prestigious Granard and Keadue harp competitions on several occasions.

“I enjoyed working with melody but what really fascinated me, as someone who trained in both traditional and classical music, was working with the two sets of instruments and styles,” he says. “Traditional musicians tend to have excellent aural skills but as a general rule, are not always great sight-readers, whereas with classical players everything revolves around the dots. Bringing the two together, although it can be problematic, is very exciting for me.”

His first extended composition, The Famine Suite, made a suitable impression on its premiere in 1997, and Rooney has gone on to receive major commissions including music for an aerial dance spectacular, The Second Coming, a piece to mark the official visit to Sligo of The Prince of Wales and the Duchess of Cornwall in 2015, and The Macalla Suite, which celebrated the centenary of the Easter Rising this year.

On the day we spoke Rooney had just been informed that he’d won the Composer of the Year title in the 2016 TG4 Gradam Ceoil awards – the Irish equivalent  of  the Scots Trad Music Awards - thanks to the Macalla Suite. He won’t, however, be giving up his day job as a school deputy principal just yet and he is looking forward immensely to playing at the Jimmy McHugh Memorial Concert and at the sessions that have grown around this event.

“I was lucky enough to get to know Jimmy a few years before he died,” he says. “He was an amazing character and a real fund as a source of repertoire.”

As small town boy from Scotstown Rooney remembers coming over to Glasgow to visit the McHugh family – the McHugh sons, Brendan and Martin, are closer to him in age – and being introduced not just to the family house, where tunes seemed to be available on tap, but also to Sharkey’s Bar, Jimmy McHugh’s local where sessions still continue in his name.

“I’d been to plenty of sessions by that time and I was well used to the sometimes rambunctious goings on you could encounter at them,” he says. “But Sharkey’s Bar with Jimmy, Brendan, Martin and their musician friends was, well, let’s just say it was lively and leave it at that before I get into trouble.”