Lula Pena - mapping out the truth in song 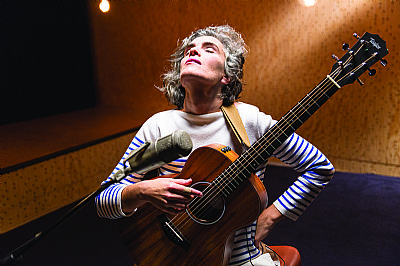 Lula Pena is hoping her house won’t blow away as she’s speaking. There is, the Portuguese singer says, music in everything. It’s just that sometimes she’d rather not hear it, and today is one of those times. Pena’s music is gentle, thoughtful, mesmerising and if there are storms in any of her songs, they’re emotional ones and the storm that’s blasting Portugal’s Atlantic coast as she speaks is not welcome.

The storm and its insistence could be a metaphor for the music industry that expects artists to work at its pace. Pena has just released her second album in almost twenty years, Archivo Pittoresco, hardly the sort of productivity that’s going to win her the description “prolific”.

“I’m not sure why it takes me so long to gather material,” says Pena, who makes her Scottish debut at Celtic Connections this month. “I know I need time to do the research and make connections between the experiences I’m thinking about and the words I need to describe them. I’m always asking questions and if you ask questions the answers sometimes lead to more questions. For me, it’s not just about rational thought – you have to allow the body time to react because music is a physical activity as much as a mental one.”

She hasn’t done it on Archivo Pittoresco but Pena, it seems, could easily credit Google as her co-writer or at least a collaborator. The texts she’s turned into songs on the album come from a wide variety of sources – she likes to use the term ‘open source’ for her ideas-gathering methods – and are written in several languages. She uses French, English, Spanish, Greek and Italian as well as Portuguese lyrics and often lets the rhythms in the words suggest melodies.

“I always loved languages,” she says, “and when an idea comes it’s great to be able to discover what writers across the world have written about these feelings or thoughts. Google is marvellous for that, although I can get lost in all the various possibilities and the choice can be overwhelming.”

Her writing method is, she thinks, an extension of her original career choice. She wanted to be a visual artist but this didn’t work out. Instead she turns the visual thoughts that might have materialised as images into sounds and finds words – she writes her own lyrics sometimes as well as sourcing them on the internet - to accompany these sounds.

She has a reputation as a solitary soul and from the way she describes her childhood it seems she’s always been at the very least self-sufficient. The guitar that her parents left lying around the house became her best friend and she was realistic enough about her ability on the instrument not to imagine that she’d one day become a musician.

“I got to a certain stage of proficiency and that was enough for what I was doing,” she says. “I was never going to be a virtuoso and when I reached my limitations with the guitar as it was, I changed the tuning and found different sounds and textures that way. It became a different instrument in a way.”

She listened to the radio avidly and when she set out on the nomadic lifestyle that she followed for some twenty years she had nowhere to store CDs so would “become my own DJ”, turning the radio dial until she found something she liked. There is, she says, something freeing in not listening to the music you choose and letting other people lead you to new discoveries. The songs she liked and wanted to sing she was able to carry in her head.

At a certain point, travelling light with her guitar, she tried busking on the streets but she found the competitiveness and her fellow buskers’ determination to protect the best spots off-putting.

“I didn’t intend to become a professional musician but I was lucky to be invited to play in small bars and I learned how to be a performer along the way,” she says.

Somehow, with no real thoughts about self-promotion far less a joined-up concert schedule, she has gathered a worldwide following that has been likened to an international secret society. Her reputation has spread largely by word of mouth, although Archivo Pittoresco’s release has been boosted by PR representation.

The album’s tracks flow one into another and it was intended to sound like a suite of songs that wander, just as Pena has done for much of her life.

“I was quite careful with the running order and wanted to present the songs in a way that people would get used to hearing and hopefully grow to like,” she says. “But at the same time, they’re not chiselled in stone. Songs change with each performance and there are so many variables when you play live: you respond to the room, the people, the temperature. I see a song as like a map that offers many different paths on a search for the truth.”