Mark O'Connor - fiddle whiz keeps it in the amily 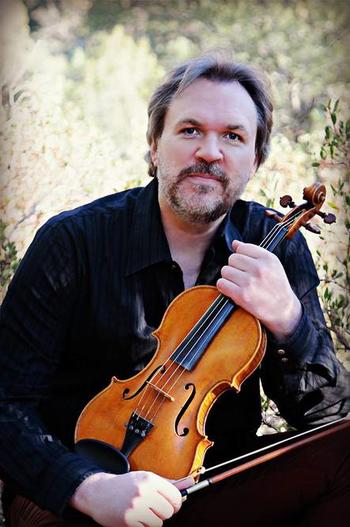 Mark O’Connor’s son, Forrest, was not always a shoo-in to the family band. He’s an enthusiastic driving force in it now but O’Connor senior, a musician whose career defines the term cross-over as he moves between bluegrass, country, swing jazz and classical styles, remembers a time when Forrest was more interested in getting the cello virtuoso and one of dad’s pals, Yo-Yo Ma to play frisbee than to play music.

It’s maybe O’Connor’s own story that made Forrest reluctant initially to follow in his father’s footsteps. Already a prize-winning flamenco guitarist by the age of ten, O’Connor pleaded with his parents to buy him a fiddle and eventually persuaded them to get one for his eleventh birthday. The proviso was that he attended lessons and practised. He did both, especially the latter.

Fast forward one year and the O’Connors – mum, Mark and his little sister – were driving from their home in Seattle to Nashville because they wanted to see parts of the country they’d only seen on television. It was, O’Connor recalls, a different world and within five days of arriving in Nashville the twelve year old’s circumstances had changed completely.

“We knew one person in Nashville before we set off,” says O’Connor, who by this time had added mandolin, having won one in a music competition, to his fiddle and guitar playing. “We called ahead and he said, go down to Second Avenue and go into the Picking Parlour. They might get you up onstage for a tune.”

They did indeed. A tune became a forty-five minute set as the audience, stunned that a twelve year old knew all their old-time fiddle favourites, kept making requests and the youngster kept delivering them.

“It was quite rare back then, in the early 1970s, to see a child playing old-time fiddle,” says O’Connor. “These days, there are great young players everywhere you look but I was a novelty. A couple of days later, on the Friday, I went along to the Grand Ole Opry to play for Roy Acuff and he put me on the Opry stage. Then, on the Monday, I was in a recording studio, making my first album for Rounder Records.”

The Rounder label was a bit of an infant prodigy itself. It had only been in business for three or four years when O’Connor made that first album but already it was earning a reputation for releasing high quality American roots music. Bluegrass sweetheart and musical partner of Robert Plant, Alison Krauss would follow O’Connor onto the label as a precocious teenager in the mid-1980s but by then O’Connor was well established as a first-call Nashville session musician.

He has now played on over five hundred albums and having recorded with one of the musicians whose tapes soundtracked the family’s trans-American drive, Johnny Cash, he was able to hire Cash’s services for a vocal on a new version of Charlie Daniels’ The Devil Went Down to Georgia – except he’s not sure that Cash actually asked for or received payment.

O’Connor also got to play with another hero, bluegrass founder Bill Monroe, although they had met dozens of times previously as O’Connor had picked up prizes, often directly from Monroe, at bluegrass competitions.  Then, as he became a fixture on the session scene, O’Connor met bassist Edgar Meyer, a bluegrass player who was equally at home in the symphony orchestra and who introduced him to the classical players who were passing through Nashville.

“It was really through hanging out with orchestral players that I started to get ideas about classical music,” he says. “I remember thinking, I could write an American caprice and because my fiddle teacher back when I was starting out made sure I had the mechanics of a western classical technique – good tone, precision, strong vibrato - as well as learning folk music, I was able to move in those circles. Then, when I wrote my fiddle concerto, it opened doors to meeting people like Yo-Yo Ma and performing with orchestras.”

Formed in 2014, the O’Connor Band, which makes its Scottish debut at Celtic Connections and sees O’Connor making his first visit to Scotland since he worked with Aly Bain and Phil Cunningham in the 1980s, features O’Connor’s wife, Maggie on violin as well as the aforementioned Forrest, a business graduate from Harvard, on vocals and mandolin, his fiancee, violinist Kate Lee, guitarist Joe Smart and bassist Geoff Saunders. It is, says O’Connor, a really invigorating group to play in.

“It’s fun because we’re family but everyone takes the music very seriously,” he says. “My wife grew up learning classical violin and playing bluegrass in her own family band so she’s used to working hard to get things right. We rehearse rigorously and I think it’s paying off. Our first album, Coming Home, has been nominated for a Grammy and just playing with these guys has inspired me to pick up mandolin and guitar again.”