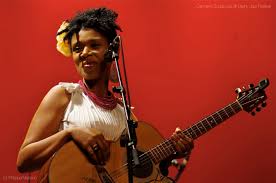 Carmen Souza remembers the first time she heard Horace Silver, the jazz pianist and composer whose Song for My Father gained a new life among a much wider audience when it provided the opening groove to Steely Dan’s Rikki Don’t Lose That Number.

Hearing Silver’s music for Souza was, she says, like coming home because her own father and mother shared the same background as Silver, in Cape Verde, the island group off Africa’s west coast. Silver was born in Connecticut to immigrant parents and Souza could tell instantly that the rhythms of his father’s homeland had fed into his music.

“There’s a long tradition of people leaving Cape Verde to better themselves because it’s so small,” says Souza who makes her Scottish debut at Celtic Connections this week. “My parents migrated to Lisbon, which is where I was born, but Cape Verdeans are very proud of their homeland and always bring something of it with them. So I grew up eating traditional Cape Verdean food, hearing Cape Verde creole being spoken and listening to my father playing Cape Verdean music. He wasn’t a professional musician but he played guitar, as my grandparents did too, so becoming a musician is in a way me keeping up the family tradition.”

When Souza was young her father worked at sea and was often away for long periods, so she missed him. This might account for the feeling of saudade, or longing, in some of her songs, although it too is a Cape Verdean trait, as well as something heard in Portugal’s fado tradition.

“I try to focus on the more optimistic aspects of Cape Verdean music,” she says. “There’s a melancholic feeling in a lot of the music you hear from there but there are also really bright rhythms. It’s a beautiful place and I remember going there for the first time when I was ten. There was no electricity on the island where my mother came from, and this was the early 1990s. The people there lived a very simple life. As long as they had food, family and music around them, they were happy, and you can hear that especially in the instrumental music.”

Souza grew up in the church and began singing in the choir. She also learned to play guitar and piano and at the age of seventeen she auditioned for a gospel music project whose musical director, bassist, composer and producer Theo Pas’cal, would become her mentor and long-term collaborator. An avid collector of jazz records, Pas’cal gave her the run of his library and it was here that she came across Horace Silver. When she heard Song for My Father it became inevitable that she would go on to perform it, although she’s sung many other Silver compositions also. In fact, her albums – she’s about to release her eighth, Creology – have a Silver track almost as standard.

“It was amazing, for me, to hear Horace Silver’s music,” she says. “My father, as well as playing music himself for enjoyment, listened to records from Cape Verde, the instrumental music rather than the melancholic songs, and I could hear the same features and grooves in Horace Silver as I heard in my father’s records. I’d listened to quite a lot of bebop from the 1950s by this time and here was someone who was around back then but playing in a very different way. He swung differently from the beboppers because he drew on his Cape Verde background.”

From the beginning of her career Souza has tried to find a unique vocal sound. It’s the constant search of the jazz musician, she says, although jazz is just one ingredient in her style. Having listened widely and developed her singing voice, in 2003, she and Theo Pas’cal began working on her first album, Ess e nha Cabo Verde. Using her ancestral dialect, creole, they added rhythms from other parts of Africa to the Cape Verdean beats Souza had grown up hearing. Over the years since they’ve added elements from Brazil, Mozambique (the trio they work together in features Mozambican drummer Elias Kacomanolis) and wherever they can find something to add character.

While audiences might not understand the creole lyrics she sings, it’s important to Souza that the words of every song should have meaning and relevance.

“I’m very picky that way,” she says. “It doesn’t matter what language I’m using, Portuguese, French, English. There are millions of love songs and lots and lots of good ones but for me there’s no point in singing something unless it’s making a difference, actually saying something. I have to believe what I’m singing so that I can convey the mood and something of the message, even if the listeners don’t know the language I’m singing in. I’m not just an interpreter, I express what I’m living.”

To do this on the new album she uses different creole dialects, her parents’ native dialect for the mellower songs and the harder, more staccato dialect from the Cape Verdean capital, Praia, for the edgier material. Musically, the album is, she says, a big mix of sounds representing South America (she’s a huge fan of Brazilian polymath Hermeto Pascoal), Europe and Africa.

Over the past ten years Souza has based herself in London, although with an international reputation and collaborations with musicians including Cuban pianist Omar Sosa and French accordionist Marc Berthoumieux on her CV, she’s as likely to be touring across Europe and the U.S. and she makes frequent trips to Cape Verde, where she’s now held in high esteem.

“I’ve been really lucky to get to travel the world for fifteen years now,” she says. “It’s amazing to be able to do what you love and to get to take it to audiences because that’s really important. When you’re a singer - or any kind of musician, really – you want to be sharing what you do with people. You don’t want to be stuck in the attic.”