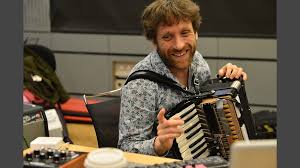 Martin Green looks around the rehearsal space where the multimedia show Flit is coming together and concedes that world events have overtaken an idea that began with a visit to his grandmother to collect stories he could tell to his children.

“I’m not sure,” he says, “that I’d set about making a show about migration now. It’s a pretty universal theme and something humans have in common with animals – they’ll move to somewhere they feel safe and have enough food just as we do – but the whole topic has become so inflammatory over the two years since we started working on Flit that there’s a danger people might think we’re trying to be preachy when, in fact, we’re not looking to put forward any message at all. It’s not about what we think. It’s about examining the phenomenon of migration, which in itself is fascinating.”

Flit is a departure in a number of ways for the accordionist and sonic experimentalist with multi-award-winning band Lau. His plan was to create a show that was more than a gig, with a visual element that used film as an integral part of the music, rather than being seen as a film with a soundtrack or music with back-projected images along the lines of a stadium rock gig.

“What we have is somewhere between those two things, I think,” says Green whose recent work has included concerts with the Kronos Quartet. “The images are triggered in segments so they can keep time to the music but they also move around. I’d done some live soundtrack work before and worked with animation, too, so I wanted to try something different, something non-linear, if you like, that would give the music an added dimension.”

If all this sounds a long way from the three members of Lau putting tunes together round fiddler Aidan O’Rourke’s kitchen table, it’s also a long way from what was going through Green’s mind when he started collecting stories about migration. The first ones came from his grandmother, whose Jewish family fled Austria in the 1930s. Her father had taken off for Shanghai first of all and while his wife sought refuge in London with her children, he met someone over there and stayed but eventually re-joined his family. That could have been a song, or an opera, says Green.

When Green spoke to his wife, the singer and accordionist Inge Thomson’s family on Fair Isle in the Shetlands, he gathered more material. The Thomsons themselves hadn’t actually moved around very much but they knew plenty of people who had ventured out from the islands in search of better circumstances. Suddenly, everywhere Green went, even just to the pub, he was meeting people who were only too happy to share family histories.

“There was one guy I got speaking to who was writing a book on the Portuguese colonisation of Goa,” says Green. “His dad was born and brought up in Goa but was forced to leave and go to Portugal and this had obviously triggered something quite specific. The more I thought about it, though, the more I wanted to look at migration in general terms. I’d collect these specific stories but then I’d rewrite them as fiction to remove any sense of time and place.”

Green sent these rewritten stories to songwriters Karine Polwart, Anais Mitchell, Sandy Wright and Aidan Moffat. By this time he had also brought BAFTA-winning animators whiterobot (aka Will Anderson and Ainslie Henderson) on board and after meeting Portishead’s Adrian Utley at one of Lau’s Lauland mini-festivals and getting him to mix the album from what was essentially Flit’s predecessor, the Opera North stage show Crows’ Bones, Green was determined to work with him again.

“I’d been to Adrian’s studio for two sessions and it’s a house of sonic delights,” says Green. “I also knew from working with him on Crows’ Bones that he, like me, wanted to spend more time with Becky’s [Unthank] voice. That whole thing with Crows’ Bones felt more like a beginning than an end of something, so Becky had to be in on Flit, as did Adrian.”

For Green, Becky Unthank’s singing is like a tap.

“You ask her to sing something and she’ll just do it in a very natural way. A lot of singers think a lot about their singing and how they’re going to phrase something before they start but there’s something beautiful about the way, with Becky, that it just comes out.”

Finding the ideal frontline partner for Unthank took quite a lot of time and soul searching. The style of the Flit songs meant that whoever was singing them needed to come from the traditional music world and yet be able to work with the dark, electronic element that Green was envisaging. Adam Holmes, the young singer from Portobello, just outside Edinburgh, whose first album, Heirs and Graces, was produced by John Wood, the sound engineer responsible for John Martyn, Nick Drake, and Sandy Denny’s Island Records output, eventually got the call.

“I’ve always loved Adam’s voice,” says Green, “and I love the way he and Becky sing together. Even though their accents are not that similar, their phrasing is and when they choose to adopt each other’s enunciation, they’re like twins.”

By now Green was beginning to get used to the slow burn that bringing together all the elements in Flit was compared to Lau’s modus operandi, which involves tune sets and arrangements coming together quickly. Having two years from germination to performance turned out to be both a luxury and a mild frustration and as we spoke, with Flit’s debut at Edinburgh International Festival still two weeks away, Green almost didn’t have to say that he was looking forward to taking the project on the road. His excitement at the prospect was palpable.

“It’s been an interesting way of working, particularly with the different art forms involved and bringing it all together,” he says. “The first pieces of music came about from me just improvising on rough ideas. I’d then work them into a groove or a backing track and give them to both the songwriters and the animators, so everyone was working on everything all the way through.”

With Green, Utley and Becky Unthank as the core musical element, they set about creating a medium outside of the folk tradition to showcase Unthank’s voice and began working on some twenty to thirty of the atmospheric tracks that Green had created. Adam Holmes and Dominic Aitchison, bass guitarist with Glasgow rock band Mogwai completed what would become the onstage band.

As the songwriting team worked with Green’s stories and backing tracks, the animators worked on bringing the spirit of the stories to life. Their first thought was to use cardboard boxes to signify possessions being transported – and eventually being left behind when people pass on - and out of that came the idea of also using brown packaging paper, a material that’s familiar to everyone and is used to send things around the world.

The paper was torn and folded into human figures and birds, as well as inanimate objects like suitcases, and these are projected in response to each song on screens among and around the band onstage, giving the feeling that both the visual and musical elements are happening live in situ. It’s a simple, everyday commodity but one that has allowed Anderson and Henderson to create a narrative film that’s threaded throughout the performance and conveys moments of sweetness as well as heavier emotions.

On its premiere, on a customised stage in Edinburgh International Conference Centre, Flit was enthusiastically received by the audience and warmly praised by the press. With a list of credits that comprises commissioning bodies - the Edinburgh International Festival, Barbican Centre, Sage Gateshead, and Perth International Arts Festival – and funders as well as producers, Lepus Productions, and co-producers, Opera North Projects plus set, video and lighting designers, dramaturg, and stylist, it’s a major undertaking.

It tours England in October, going on to Shetland in early November, and has performances scheduled into 2017. It’s already available on CD and vinyl, so the work that Green and his team have put into it will last well beyond the premiere-and-possible-album scenario that often afflicts new work of this kind.

For Green, despite his doubts about taking on a subject that escalated beyond his control between initial idea and performance, migration is not a subject to shy away from.

“It’s something that happens naturally,” he says. “This is why there’s quite a strong focus on birds in the animations. Birds are the perennial migrants – it’s what they do - and the material I collected wasn’t all heavy stuff about people escaping from the holocaust and things like that. So, after two years of thinking about it as we worked we decided that we didn’t need to present our opinion. On the other hand, if Flit inspires people to think about the subject as they leave the performance, then that is enough.”