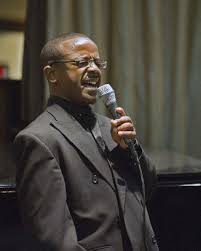 Kenny Washington used to see Wynton Marsalis around New Orleans and be so awestruck that he didn’t dare go up to the trumpeter and say hello. He wasn’t to know back then that thirty years and more later the awe would be reciprocal and that when Marsalis restaged his Pulitzer Prize-winning oratorio, Blood On the Fields in 2013 there would be only one choice for the part Washington sang. Marsalis has also invited Washington to sing with the Jazz at the Lincoln Center Orchestra in New York later this year.

The Marsalis family lived on the other side of town from the singer, who makes his Scottish debut with the Scottish National Jazz Orchestra this weekend. Wynton and his older brother, Branford were already great musicians when they were in high school and clearly destined for great things even then, says the singer. So when he hears Wynton describe him as “a consummate professional with impeccable intonation” and “a real improviser who brings depth to everything he does,” he feels humbled.

Other jazz musicians have made similar comments about the quietly spoken Washington. Joe Locke, the vibraphone virtuoso who will be sharing the stage with him on the SNJO concerts rates Washington as one of the greatest living male vocalists. In turn, Washington acknowledges that without Locke he wouldn’t be appearing in Scotland, let alone have made the impact in New York that led to the Marsalis connection and led to him travelling last year to South Korea and Mongolia to give jazz vocal masterclasses.

“Joe’s quite a character,” says Washington with some understatement. “He just happened to be in Half Moon Bay here in San Francisco on vacation and wandering around, looking for some live music, when he came into the club where I was working with the saxophonist Michael O’Neill’s group. He was very complimentary about my singing and told me we should do something together. I didn’t think too much about it but he was true to his word and he invited me to New York to work on a programme of Henry Mancini songs, some of which coincidentally we’ll be doing again in Scotland.”

Washington grew up with church music, rather than Mancini, and sang in the church choir every Sunday. At high school he took up the saxophone and he thinks now that he was really trying to sing through the horn. Following music studies at Xaveri University he joined the US Navy band, still playing the saxophone with singing on his mind.

“I might have become a saxophone player,” he says. “I played it through high school and at university and I was good enough to be invited to join the Navy band but once the Navy discovered I could carry a tune, they put me in front of the band as a singer and that suited me just fine. I probably didn’t want to play saxophone enough, otherwise I might have joined a long line of musicians who came through the military and went on to play jazz. A lot of great players took that route but I really wanted to sing.”

On leaving the Navy band Washington moved to San Francisco’s Bay Area and got work as a soul singer with a liking for Donny Hathaway, Sam Cooke and Marvin Gaye. Although he’d heard jazz around New Orleans – he remembers the colours and sounds of the French Quarter particularly – and played big band music in the Navy band, he hadn’t really explored the jazz singing canon until he began to listen to Ella Fitzgerald and Sarah Vaughan. Slowly he started stirring in their improvising styles into the soul and rhythm ‘n’ blues music he was singing until, by the time Locke first heard him ten years ago, he was singing jazz standards with, as the vibraphonist remembers, the feeling of Donny Hathaway.

By this time Washington had appeared in a musical, Fire at Keaton's Bar and Grill, with Elvis Costello and Deborah Harry, in New York, London and Amsterdam. He remembers this as great fun and his illustrious co-stars, although they didn’t actually appear onstage at the same time, as sweet people. The resultant album is one of a select few recordings that the singer has appeared on, including his own Live at Anna's Jazz Island. Despite Marsalis and Locke’s promptings, he says he’ll make his own studio album when he feels ready.

“I’m my own harshest critic,” he adds. “I’m at my happiest when I’m singing to an audience and although I have these concerts coming up with the Jazz at Lincoln Center Orchestra, I don’t get many opportunities to sing with a big band. That’s why being invited to Scotland with Joe to sing with the Scottish National Jazz Orchestra is such a treat.”