Rachael Cohen - Bringing it all back home 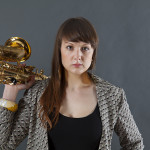 As well as the concert, Cohen will be taking workshops at the school and it’s this that gives her pause. It doesn’t seem so long ago, she says, since she was the beneficiary, in Edinburgh and later at Birmingham Conservatoire, of visiting musicians’ wisdom. Now that it’s her turn to pass on the baton she’s excited but feeling the idea just a little bit scary.

Cohen arrived in Edinburgh from Shetland, where she’d gone against the tide in choosing saxophone over fiddle, in time to enrol at Broughton High School, which houses the music school. It was quite a culture shock from being one of three hundred pupils in Lerwick to mingling among four times as many at Broughton. Her time there, however, was inspiring, with a piano teacher in Lynda Cochrane who worked with Scottish Ballet, among other high-powered gigs, and saxophone tutors in Sue Mackenzie and Martin Kershaw who were also busy working musicians.

Before Cohen left school Kershaw was putting engagements her way that he couldn’t fulfil himself and having turned up to audition for the Tommy Smith Youth Jazz Orchestra at fourteen, she sight read the lead alto part of Maria Schneider’s Wyrgly – no easy test piece – and joined the band. This gave her a first taste of international touring when TSYJO appeared at the International Association of Jazz Educators Convention in Toronto.

Playing with Smith’s “nursery” band for the Scottish National Jazz Orchestra also gave Cohen the experience of working alongside top international musicians including vibraphonist Joe Locke and bassists Arild Andersen and Michael Janisch. As lead altoist in the National Youth Jazz Orchestra of Scotland also, there were further valuable experiences and encounters.

“I met so many people in these bands who became solid connections,” she says. “A lot of the time in music it’s about showing people that you can do a certain job and very often they’ll remember you and come back and book you for a gig or a session.”

Birmingham Conservatoire was another key stepping stone to a career that revolves around London hotpots such as Ronnie Scott’s and the Vortex.  Among Cohen’s early Birmingham experiences was playing for legendary alto saxophonist Lee Konitz. Konitz turned out to be one of a series of inspiring and influential musicians who visited and worked with the Birmingham jazz faculty, taking time to talk and socialise with the young players.

Composer Mike Gibbs, whose orchestra has been a beacon for large scale jazz writing since the 1960s, worked with the faculty big band regularly during Cohen’s time there and bassist Dave Holland, a local musician from Wolverhampton who was lured to the U.S. by Miles Davis after the trumpeter heard him play at Ronnie Scott’s, was the Visiting Artist in Residence.

“Dave Holland was amazing,” says Cohen. “He’s one of the ultimate examples of what can happen in a jazz musician’s career because of his experience with Miles Davis but he’s also a beautiful guy. He used to send over compositions for the various ensembles to learn and then he’d turn up to workshop them with us and we’d get to play gigs with him.”

The aforementioned Michael Janisch was also a frequent visitor to Birmingham. Shortly after he formed his Whirlwind Recordings label, he released Cohen’s first album, Halftime. Around this time she moved from Birmingham, where she had worked steadily after graduating, to London.

Being the first woman to sign for a label that has released dozens of enthusiastically received albums was, she says, an honour, although she has no firm plans for a follow-up.

“There’s this thing in jazz that says you have to keep on reinventing yourself and releasing records regularly otherwise people will think you’re not doing anything,” she says. “I’m not so sure about that. When I arrived in London I had an album but people didn’t know how I would sound in, say, a big band or on a standards gig. I had to concentrate at first on getting established so that I would have enough work and I’ve done that. Apart from teaching piano on Saturdays at a perfoming arts centre, I gig as a saxophonist full-time.”

Returning to Edinburgh for The Homecoming will allow Cohen to play an extra date the previous evening, at the fortnightly Playtime session that her former teacher Martin Kershaw has been involved in setting up and maintaining.

“It was like being back at school,” she says. “Martin discovered I was doing the Queen’s Hall concert and said, If you’re free on the Thursday, there’s a gig going.”

Rachael Cohen plays Playtime at the Outhouse, Edinburgh on Thursday, March 9 and The Homecoming at the Queen’s Hall on Friday, March 10.