Elliot Galvin - The art, and literature, of jazz 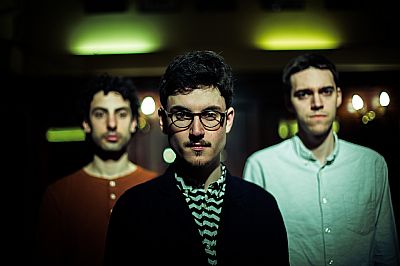 Milton Ernest Rauschenberg are possibly not the first three words you expect to read in a feature about a jazz musician. The American artist, known to his admirers as Robert, has had a profound effect on the young London-based pianist Elliot Galvin, however, and while Galvin can wax lyrical about names more readily associated with his own genre – Keith Jarrett has been a major inspiration too – he is particularly interested in incorporating ideas from other art forms into the jazz piano trio format.

With his second album, Punch, released last year on the go-ahead Edition label, Galvin has been causing much excitement among people who write about and broadcast jazz. His very individual style has seen him likened, not unreasonably, to Django Bates, who at a similar age to Galvin – mid-twenties – could beguile audiences with Stravinsky-like complexities one minute and have them wiggling in their seats to a groove gleaned from South African exile Dudu Pukwana or Marvin Gaye the next.

“My parents both listen to all kinds of music so I grew up hearing lots of different genres of music at home,” says Galvin down the line from Ireland where, as we speak, he is touring with trumpeter Laura Jurd in whose band he has been working for some seven years. “My mother particularly encouraged me to play the piano and I tried it for a while before I thought, this is a bit naff, and gave up for about a year.”

A teacher by the name of Paul Angel put the young Galvin on the road to where he is today by introducing him to improvisation. Suddenly, while not yet twelve years of age, the student was inspired by jazz and the idea that here was a form of music that you could make up yourself, as opposed to reading the dots in piano exercise books.

Galvin read the dots as well. He went on to study at Trinity College of Music with Liam Noble, a pianist who has worked with the great Scottish saxophonist Bobby Wellins and singer Christine Tobin as well as being involved with the free improvisation scene. Noble played a major role, Galvin says, in encouraging him to pursue an individual style and to try transferring ideas from literature or visual art to his own compositions.

“I remember reading James Joyce’s Ulysses and thinking it was hard to understand but at the same time there were all these different references layered on top of each other,” he says. “I liked that effect. It’s almost as if you start off with an idea and then you hide it but it’s still there so you can come back to it. Rauschenberg did that too. I went to see an exhibition of his work at the Tate Modern and I loved how he’d take an image of JFK, say, and paint over it or manipulate it. It’s a tricky process, translating that to music and I suppose the ultimate challenge is making it sound natural.”

Galvin succeeded in doing this relatively quickly. In 2014, the same year he released his first album, Dreamland, his trio won the coveted European Young Jazz Artist of the Year Award. The cash prize for this – given in Euros – enabled him to record his much-praised second album, Punch, in Berlin’s Funkhaus recording complex. Almost as valuable in terms of experience, however, was the other part of the prize, which saw the trio opening Burghausen Jazz Festival in Germany in front of two thousand people as support to Jamie Cullum.

“Normally when you see someone getting a slot on a festival like that as a competition prize, they get thirty or forty minutes,” he says. “We were given ninety minutes in front of this huge audience, certainly in jazz terms, and we didn’t actually have ninety minutes’ worth of music at that time. We just went out and played and the audience were really supportive, and that was an important point in the trio’s development. The audience reaction there gave us a lot of confidence.”

Having the same line-up over the trio’s six to seven years existence has been another important factor and although Galvin’s just changed drummers, with former Young Scottish Jazz Musician of the Year Corrie Dick replacing Simon Roth alongside bassist Tom McCredie, there’s still a lengthy history involved.

“Corrie and I have been in Laura [Jurd]’s group together for about as long as I’ve had my trio, so we know each other well,” he says. “We have a similar approach to making music and it’s been a relatively easy transition. I’ve just started work on the next album and having that musical understanding between us helps me as a composer because it’s not just a matter of writing notes, it’s about writing for the other musicians’ personalities.”