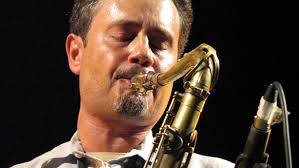 Playing with jazz legends runs in Rick Margitza’s family. The saxophonist, who returns to Scotland to perform at Aberdeen Jazz Festival this weekend, worked with Miles Davis in 1989, appearing on the Amandla album and subsequent live releases.

Decades before this, however, his maternal grandfather, a bassist who played with the Glenn Miller Orchestra and other big bands, appeared on the Charlie Parker with Strings recordings. So there was form when Margitza went against his father’s wishes and became a jazz musician and something of a legend himself.

Speak to saxophonists of a certain vintage and Margitza’s name is greeted with reverence. The man who became the last tenor saxophonist to play in Miles Davis’s band and went on to follow his heroes onto the Blue Note label has a tone and playing style that have been studied and deconstructed in many a practice room.

He grew up surrounded by musicians. His father, who had ambitions for Rick to become a concert pianist, played violin in the Detroit Symphony for almost thirty years, and his paternal grandfather played the gypsy violin music that the family brought to the U.S. from Romania. From the age of four Margitza played violin too and then studied classical piano until the day he heard Charlie Parker.

“It happened to be the record that my grandfather played on and when I heard the music, I immediately said, that is what I want to do,” he says. “So I went to school the next day and got a saxophone and started playing along with records. I studied classical piano to the point where I was getting good at it and enjoyed it, but it didn't speak to me as much as the jazz did.”

As well as Parker, Margitza listened to and learned from other major saxophonists including John Coltrane, Sonny Rollins, Wayne Shorter, and Joe Henderson, acknowledging that learning how to imitate is an important part of the musician’s apprenticeship before going on to develop an individual voice.

“I was just into the saxophone period,” he says. “But there are a couple of influences that are maybe not as well known or as well appreciated. One was Gerry Niewood, who played with Chuck Mangione for a long time. He had a big influence on my playing and someone else who doesn’t get the credit he deserves is Warne Marsh.”

Marsh came out of the “cool school” with altoist Lee Konitz, although he could also play with considerable fire, as confirmed by Apogee, the 1978 album he and Steely Dan session saxophone star Pete Christlieb had produced for them by the Dan’s Walter Becker and Donal Fagen.

It was Margitza’s high school big band director in Michigan, Jack Pierson, who turned him onto Marsh. Pierson had played with Cannonball Adderley and his main message to students was to avoid playing clichés and develop a personal style. “Warne certainly fit the bill on both of those counts,” says Margitza.

After high school Margitza attended Berklee School of Music, the University of Miami, and Loyola University in New Orleans. The influence and experience of his teachers helped him on a technical level and prepared him – as much as anything can, he says – for the New York scene where he arrived with the beginnings of the reputation he enjoys now. Through a friend who worked there he was soon signed to Blue Note and although the three albums he recorded didn’t remain available for long, they may well have counted when Miles Davis’s then regular saxophonist, Kenny Garrett, was unable to make some European dates and producer Tommy LiPuma recommended Margitza instead.

As with many musicians who worked with Davis, Margitza spent years afterwards processing everything that he learned from the experience. He particularly remembers being called into Davis’s dressing room for his turn in a pre-gig ritual.

This doesn’t detract from the sheer thrill of going round to Davis’ apartment to be given the job, though.

These days Margitza lives in Paris, where he moved in 2003, having long felt that he would work more consistently playing creative music in Europe. Among the people he’s met since moving are Swiss trio Vein, with whom he appears in Aberdeen. As with Miles Davis, he was recommended to them when someone, one of his mentors, saxophonist Dave Liebman, couldn’t make a concert and recommended him.

“Luckily I was free and that started our relationship,” he says. “They’re great musicians, cool people with interesting compositions....what’s not to like?”