Cathal McConnell - stepping out with "the girls" 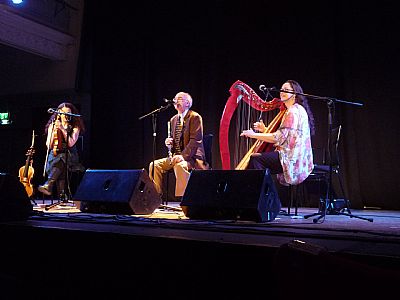 Cathal McConnell remembers the pivotal moment that set him on the path towards being a professional musician. With flute players and singers on his father’s side of the family going back at least three generations, it was probably inevitable that Cathal and his brothers would be encouraged to follow suit.

To delve into what form this encouragement took and how the seeds his father sowed came to fruition takes the founder of one of our best loved and longest-running folk groups, Boys of the Lough, into recollections of men who traded music lessons for bottles of Guinness and an impressive catalogue of exact dates and precise places of origin of the characters involved.

The music that flows through McConnell like a life force may all have come down the paternal line and his mother (“a lovely woman just the same”) may not have contributed to it in a familial sense. Mrs McConnell’s intervention, however, brought her son’s talent to wider attention.

It was at a music competition in Donegal that McConnell’s mother realised that her son had significant musical abilities.

“I’d gone there and played my best tin whistle set and when the judges announced their adjudication they named the first, second and third place winners and said, We were very sorry we had to eliminate the boy from the north,” McConnell recalls. “Well, it must have been a bad decision because people were coming up to us afterwards and saying how I’d been badly done by and I should have won.”

Mrs McConnell, a teacher, wasn’t about to put this down experience. She wrote to the BBC in Belfast, telling them about her very musical son and mentioning the Donegal debacle. The next thing young Cathal knew, he was being summoned from Fermanagh to the BBC’s Northern Irish HQ for an audition.

So well was the youngster’s playing received that the tape was sent down to Dublin for broadcast there also and so began a series of radio and, later, television appearances that set McConnell off on a career whose early experiences included rubbing shoulders with Van Morrison at the Ulster Folk Music Society in Belfast.

The society was run by Robin Morton, a song collector, musician, broadcaster and academic, who showed the mettle that would make him a successful record producer and band manager with Boys of the Lough, and subsequently Battlefield Band, by limiting Morrison’s contributions to club nights to a couple of songs.

When Morton, McConnell and fiddler Tommy Gunn played together at the club in 1967, they so impressed the bill toppers, Peggy Seeger & Ewan MacColl, that they were invited to tour England with them the following year. There, while preparing for a television broadcast, the presenter declined to name them individually and told them they needed a band name. Gunn suggested Boys of the Lough and it stuck.

McConnell’s memories of the early days of Boys of the Lough involve changes of location – he followed Morton to Edinburgh – and changes of line-up as he and Morton initially joined forces with the then thriving duo of Aly Bain & Mike Whellans. There are also recollections of fees – moving up from £40 to £60 was the cause of some celebration – and an Usher Hall debut that saw the nerves caused by this momentous occasion being assuaged by liberal pre-concert indulgence in the backstage catering.

“You wouldn’t get away with that sort of thing nowadays,” says McConnell. “But when we went on to the stage and I announced that we’d had a good drink to calm ourselves the audience loved it.”

Under Morton and later Dave Richardson’s player-managership, the Boys of the Lough grew from an exciting young act into an international touring phenomenon with a steady catalogue of recordings. McConnell estimates that the group has completed seventy or eighty American tours and as the group goes through a period of uncertainty, with the four musicians who recorded its latest album, 2014’s The New Line, living in three different countries, he is working with a line-up that unofficially goes under the name of the Boy and Girls of the Lough.

“We haven’t made a decision on the Boys of the Lough’s future,” says McConnell, who won a Herald Angel award for his Cathal McConnell & Friends concerts at the Edinburgh Fringe in 2015. “I certainly don’t want to stop playing music and I’m really enjoying working with Kathryn (Nicoll, fiddle) and Karen (Marshalsay, harp). They’re great players and I enjoy sharing songs and tunes with them.”

With some two hundred songs and innumerable tunes to call on he feels a need to rotate his repertoire.

“I don’t like to play it safe,” he says. “That’s why I introduced variations like playing two whistles at once. It’s a little bit of theatre and audiences like that. They also like a story, whether it’s true or not.”

And with that, McConnell, the master storyteller goes off to rehearse with his girls.