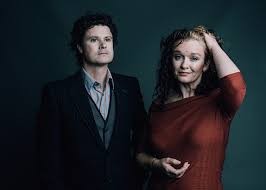 When Kathryn Roberts sat at the family piano as a teenager learning songs from her parents’ Sandy Denny albums, little did she imagine that one day she would perform these songs with the same musicians who accompanied the fabulously talented but ill-starred former Fairport Convention singer-songwriter.

Fast forward twenty-five years to 2015 and Roberts is sitting at a grand piano onstage, looking across at guitarist Jerry Donahue, bassist Pat Donaldson and drummer Gerry Conway and thinking, Wow, how did I get here?

The short answer to how Roberts progressed from Yorkshire living room to touring with Fotheringay, the reformed version of the band Denny assembled in 1970, is similar to the “How do I get to Carnegie Hall?” gag: practice. In reality, though, the journey involved thousands upon thousands of road miles, incalculable studio hours, hundreds of gigs and umpteen folk festivals, at one of which Roberts met her best mate, husband, co-writer, record producer, and touring partner, Sean Lakeman.

Sidmouth 1994 – “or it might have been ‘93” – was where Roberts and her then duo partner, Kate Rusby bumped into the Lakeman Brothers, a Cornish trio much the same age as themselves. They quickly bonded as the young gang avoiding the oldies at folk festivals that summer. When a trip to Portugal came Roberts and Rusby’s way, with the suggestion that bringing a band would be even better, they had a ready-made team in the Lakemans. So Equation was born.

“It all happened by accident,” says Roberts of the band that toured and recorded for some twenty years, losing Rusby and gaining Irish singer Cara Dillon when the first recording deal was struck. “We thought going to Portugal with the Lakemans would be fun – and it was – then before we knew it we were signing to Rough Trade and going off on this great adventure.”

Equation’s pop style didn’t receive universal approval in the folk music world but America took the band to its heart. Roberts reckons they toured to all but two of the United States, playing a plush theatre one night and a rough and ready club complete with chicken wire across the front of the stage the next.

“The last six or seven years, until 2005 when the band broke up, we spent criss-crossing the States on these long tours, three months at a stretch,” she says. “I’m not sure I could cope with that now. It was exhausting. At the same time, though, it was a brilliant education. I learned so much, not just about being a musician but about how to interact with people because we’d arrive in a strange town and often not know what kind of situation we were walking into.”

When Equation split three separate careers began. Seth Lakeman went on to solo success, helped in no small way by his older brother, Sean. Cara Dillon and Sam Lakeman formed the very effective team behind her considerable acclaim, and Roberts and Sean Lakeman turned their offstage partnership into an onstage one. They’ve now won the BBC Radio 2 Folk Awards Best Duo title twice and had Roberts The Ballad of Andy Jacobs nominated as Best Original Song in the same awards in 2013.

“We were good mates for two years before anything else happened,” says Roberts. “I think we grew on each other and that’s stood us in good stead. We each know how the other person’s likely to react and as far as working together is concerned, it’s great. Before, I would have been nervous about showing my ideas, a set of lyrics, say, to anyone, whereas now, if Sean does say something negative about something I’ve written, I know it’s not personal. It’s work and we have a very easy working relationship because we’ve been together for over twenty years.”

“You’re that bit more exposed in a duo. There’s no hiding place but I actually really like that because it forces you to be really on it every time.”

On the tour that brings them back to Scotland this weekend they’ll be road testing new songs as well as singing older favourites, including one from Roberts’ Fotheringay experience, Sandy Denny’s classic Solo. Her own songwriting comes naturally. Nothing is forced. Indeed, The Ballad of Andy Jacobs, Roberts’ capturing of events during the miners strike in Yorkshire, was a work in progress for over ten years before finally making it onto an album.

“I don’t set out to write a political song or a song of heartbreak and I probably won’t write another song like Andy Jacobs,” she says. “The name was made up but I had these memories of growing up during the strike and I felt I had a story to tell. If you write from personal experience your songs will generally ring true.”