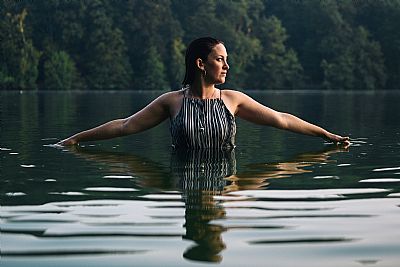 Fini Bearman is talking about the magical connection that can happen between a singer and an audience. The magic doesn’t need to be in the music, although that’s obviously the goal. It can be something that’s said in introducing a song that draws the listeners in and makes them think, yes, I’ve been there.

Three albums into her jazz singing career, the London-based Bearman, who plays her first Scottish gigs in Edinburgh and Aberdeen this coming week, is a performer who has learned from some of the best.

As a member of the London Vocal Project, a community of some two dozen singers and performers comprising students and alumni from London's conservatoires, she spent three months perfecting the intricate and deeply evolved choral parts from Bobby McFerrin’s VOCAbuLarieS album for a one-off performance at the Barbican in 2010. “That was hard,” she says, with feeling, recalling it as if it were the day before.

There was also the “intimidating” experience of working with the late Scottish saxophone master, Bobby Wellins. Wellins didn’t have an intimidating bone in his body but his unhurried creativity at the fastest tempo could make a young music student feel inspired on one level and want the stage to open up and swallow her on another.

“Bobby was lovely,” she says. “I loved how he could play with that gentle feel and yet also with complete abandon.  He could be very assertive without being aggressive in his music and that sense of being unrushed, taking things at your own pace, is one of the biggest challenges you can face. You have an idea. Then you start thinking about what’s going on with everyone else and you have to let that go because no-one else can be you.”

Bearman was an accidental jazz student. She trained as a classical singer through her teens and then at the age of seventeen she fell in love with the saxophone in general and Wayne Shorter’s contribution to Joni Mitchell’s Mingus album in particular.

“I’d always sung and I always thought I would be a singer, I just didn’t know how,” she says. “Then when I started playing saxophone and listening to jazz I learned about improvising and I decided I would improvise with my voice instead of my tenor.”

She applied to the jazz course at the Guildhall School of Music and Drama in London on a whim, because a friend was auditioning there, and she was accepted. Thoughts of going to university and studying English, or something similarly academic, were ditched and she entered a world where discoveries such as American singer Kurt Elling and the great English vocalist Norma Winstone lay in wait.

Then, on a further whim, after visiting a friend in Berlin and succumbing to the instant feeling of belonging there that has drawn many artists and musicians to live in the city, she applied to the Jazz-Institute Berlin and became the first singer to be accepted onto its Masters course.

“That was an amazing experience,” she says. “It’s an amazing course but there’s also such a melting pot of different music in Berlin itself. You get the sense of being surrounded by creative people and that’s inspiring.”

Back in London with a degree from the Guildhall and a Masters from Berlin, Bearman started to find musicians to work with and gigs to sustain her. The year before she’d gone to Berlin she’d started writing her own material, not from any particular drive to compose, more because she felt that’s what jazz musicians did.

“Everyone I hung out with at the Guildhall was writing,” she says. “So I suppose I went with the crowd. It wasn’t that I didn’t want to sing the Great American Songbook or interpret other people’s songs. I always enjoy singing standards and I know that they’re a rite of passage for a jazz singer. I just felt that, if I wanted to be a contemporary jazz musician, I should sing and write about my own experiences.”

All sorts of influences feed into her songwriting. Stevie Wonder and Donny Hathaway from her soul music interests, Paul Simon and Joni Mitchell from the school of great lyric writers, Laura Mvula from the younger set and classical composers including Brahms and Bernstein have all fed into her broadly jazz-folk style.

“As singers our role is really to be storytellers,” she says. “The gigs where I’ve been most moved as a member of the audience have always been the ones where I’ve felt the singer was connecting with people. I remember seeing Mark Murphy introducing Alone Again (Naturally) with this spiel that set the song up so brilliantly that he almost didn’t need to sing it and everyone in the room understood exactly where he was coming from. Creating that rapport, that magic, it’s an art.”