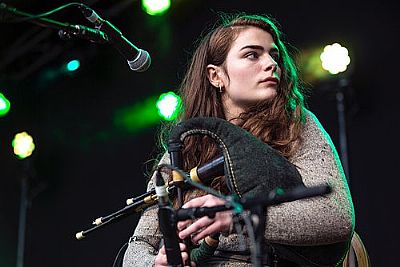 It seems appropriate somehow that Brighde Chaimbeul should learn to play the pipes thanks to a Greek neighbour. The winner of the 2016 BBC Radio 2 Young Folk Award, Chaimbeul grew up as a Gaelic speaker on Skye and has immersed herself in the Gaelic piping tradition. As she says, however, there is bagpipe music in countries all over the world and she wants to get out there and experience it.

Last month she took her first steps in this voyage of discovery. For the whole of March, thanks to a bursary from the Saltire Society and support from Feisean nan Gaidheal and the British Council, Chaimbeul travelled through Bulgaria, listening to and playing with local pipers at every stop.

“It was quite daunting in a way,” she says from the family home on Skye. “I was travelling alone but everyone I met was really kind and helpful. There was a language barrier, of course, because I don’t speak Bulgarian at all but as soon as the pipes came out we were able to communicate. People would want to get to know you when they heard the music and the pipers over there are very keen to share their own music. It was an amazing experience. I’d love to go back there.”

Chaimbeul can’t remember what made her want to play the pipes. She remembers, at a very young age, seeing Rona Lightfoot, the great piping champion from South Uist, and that might have given her a notion. As with all the family – her sisters Mairi and Steaphanaidh play the Scottish harp and pedal harp respectively - Brighde was encouraged to play music and was already playing fiddle and piano when she encountered a chanter in a neighbour’s house.

“I think this Greek guy was looking after us one day and I started fiddling around with the chanter that was lying on his table,” says Chaimbeul who is among the cast of an all-star piping concert, Bagpipes Gu Leòr that opens Edinburgh’s Tradfest celebration of the traditional arts tonight. “I must have seemed interested because he ended up giving me some lessons before I started to learn from Niall Stewart at school when I was seven or eight. Niall was a great teacher, really encouraging, and it was probably through him that I became interested in the older Gaelic tunes.”

While it’s become the norm for young traditional musicians to write their own tunes Chaimbeul has a passion for finding dance tunes and airs that have long been forgotten or neglected. The rhythms of old puirt-a-beul – the mouth music used to accompany dancing in the absence of instruments -  and the descriptive qualities of song airs have a strong attraction.

“It helps to know the language because you can delve into the meaning of the songs and bring that out in your phrasing,” she says. “It’s the same with ceol mor where there are often songs attached that give an insight into what lies behind them. I like to know the songs that form puirt-a-beul, too, but it’s the rhythms I particularly like. They’re designed for step dancing and you can really hear that in the old ones.”

In 2014, while in her fourth year at St Mary’s Music School in Edinburgh, Chaimbeul encountered another of her piping passions, the smallpipes. Already adept on the Highland pipes, as she showed by being the youngest ever winner of a Junior Pìobaireachd Prize at piping’s prestigious Northern Meeting and in being chosen as the lone piper at the Highland Military Tattoo in 2015 and 2016, she heard the Perthshire pipers and pipemakers, Hamish Moore and his son, Finn at the Blas! festival and wound up studying the smallpipes with Finn.

This was, at least in some measure, her passport to the 2016 BBC Radio 2 Young Folk title. She wasn’t going to enter but her parents convinced her that she should.

“It’s had a massive effect,” she says. “I wasn’t even playing gigs on my own when I won, never mind with a band, so it was all a bit of a whirlwind.”

Part of her prize was an appearance at Cambridge Folk Festival, which turned out to be the first performance by her trio with guitarist Innes White and sister Mairi on clarsach. Soon after came a slot at Cropredy, Fairport Convention’s annual bash in Oxfordshire, in front of twenty thousand people. She’s since gone on to appear on TG4’s Port with the brilliant uilleann piper John McSherry, in a programme that reaches Scottish television screens early next year.

“There are a lot of great pipers in that concert,” she says in her quietly unassuming way. “It should be a good night.”

Bagpipes Gu Leòr is at the Queen’s Hall, Edinburgh on Wednesday, April 26.