Helena Kay - sax and piano at full tilt in Perth 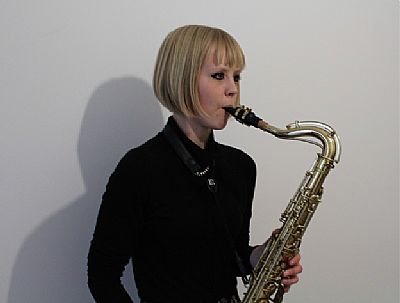 Helena Kay is wondering if she might need to bring a timer to her Perth Festival of the Arts concert this Saturday.

The London-based saxophonist, who won the Young Scottish Jazz Musician of the Year title in 2015, will be playing in her hometown with another former Young Scottish Jazz Musician of the Year, pianist Peter Johnstone, who has gone on to win the much-coveted Peter Whittingham Jazz Award with Glasgow quartet Square One and now works with the Scottish National Jazz Orchestra and saxophonist Tommy Smith’s new quartet, Embodying the Light.

Johnstone, it’s fair to say, is an enthusiastic participant in any musical situation he finds himself and Kay is slightly concerned that he might be hard to stop once he gets in the mood.

“We had a rehearsal a few weeks ago,” she says down the line from London, where she’s just finished another rehearsal that overran. “We hadn’t seen each other for ages but as soon as we started to play it felt comfortable, so comfortable that before I knew it, three hours and more had passed without a break. That’s a long time to be blowing a saxophone, for me, but it was great fun.”

Kay started out on violin, mainly because that’s the instrument she was given at school, but when she heard the sound of a saxophone coming from the radio one day, she begged her parents to buy her one. Eventually after a sustained campaign, they relented and bought an alto and any conditions along “you have to practise” lines soon became redundant.

“My first teacher was into jazz and he steered me towards people like Charlie Parker and Cannonball Adderley, who I really loved a lot,” says Kay. “I also liked Art Pepper early on. I liked the feeling he put into his solos and the West Coast players, like Lee Konitz, all the big alto players made me want to improve my own playing.”

From school orchestras in Perth & Kinross and a local Perth big band that met once a year she gravitated towards the neighbouring Fife Youth Jazz Orchestra. Here she fell under the ultra-enthusiastic influence of the irrepressible Richard Michael, FYJO’s musical director of over forty years.

“I played my first solo with FYJO,” she says. “It was nerve-wracking but when Richard points at you, you’ve no choice but to just go with it. Scary as that was though, FYJO was a great environment to try it out in because Richard was so encouraging with his “There are no mistakes” slogan. I remember sitting down after I’d played and feeling a great relief but also a sense of achievement. It gave me the will to go on and do more.”

As well as FYJO, Kay’s teenage years were taken up with rehearsals and concerts with the National Youth Jazz Orchestra of Scotland and Tommy Smith’s Youth Jazz Orchestra, where she and Johnstone were contemporaries, as she worked towards securing a place at the Guildhall School of Music and Drama in London.

Her success in the Young Scottish Jazz Musician of the Year competition in 2015, by now having moved onto the tenor saxophone, came at a fortuitous moment. Part of her prize was a gig at London Jazz Festival later that same year and having at the time just recently graduated from the Guildhall and seen other graduates face a limbo period between study and work, she was pleased to be able to move immediately from one to the other.

“Winning the competition was a great confidence boost,” says Kay. “But having something to work towards almost as soon as I finished my course was in some ways more important. I actually got another gig at the same festival because I was already appearing, so I made good contacts there as a result and I probably got those gigs and the one at Glasgow Jazz Festival, which was part of the prize too, a lot sooner than I would have done otherwise.”

Kay remains at the Guildhall, where she is working towards her fellowship and where she leads the weekly jam session, and outside that she is busily establishing her KIM trio with bassist Misha Mullov-Abbado and drummer Dave Ingamells. For her Perth concert with Peter Johnstone she’s preparing to play some of her own compositions, one of Johnstone’s and trumpeter Tom Harrell’s Sail Away as well as selections from the Great American Songbook.

“When Pete and I rehearsed for the concert it was really interesting to see how things I’d written for tenor, bass and drums worked in a saxophone and piano duo,” she says. “But then, Pete’s the kind of musician who will make whatever you put in front of him sound great. It’s getting him to stop making them sound great that can be the problem.”