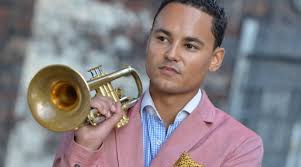 Jay Phelps is great believer in the possibility of good outcomes from bad situations. The Vancouver-born trumpeter cracked a rib while rescuing his mother’s dog from the canal where she moors her houseboat. The injury would be a painful experience for anyone but for Phelps it had the added effect of putting him out of work temporarily.

A favourable solution was at hand, however. Searching the internet, Phelps found a flight to Thailand for £200. He has a friend there so he knew he would have accommodation, although he wasn’t expecting to find himself being given the run of the family’s beach condo, where he was able to spend every day composing music as he looked out over the ocean.

“It was a golden moment,” says Phelps, who brings his quartet to Scotland twice in the next few weeks. “It’s not often as a musician you get to work in such a relaxed way. I wasn’t listening to much music at all, other than what I was working on, so I was able to compose with a clear mind. I’d just wake up and go to work and it was a great feeling, really freeing.”

The fruits of these relaxed labours take up much of Phelps’ new album, Free As The Birds, which will be released this autumn. It’s the music he’ll be playing on his Scottish concerts and, he says, it marks a transition from the old Jay to the new Jay.

As he approached his mid-thirties – he’s lived in London for half his life, having left Canada at seventeen in 1999 – Phelps began to feel that he needed to change within himself and within his music.

“I want to be current, be a part of my generation,” he says. “The old me was a purist for the jazz tradition. I was an old fogey. In fact, I was an old fogey when I was quite a young musician, whereas the new me is open to whatever. I’m thankful for the old me because it gave me the playing ability that’s got me this far but this new album is a sign that I’m growing, looking forward.”

Phelps’ arrival in London as a teenager was initially daunting, he says. He didn’t take long to find his feet, however, thanks to his then step-father, trombonist Dennis Rollins and a network of musicians he was able to plug straight into including Courtney Pine and the London big band Tomorrow’s Warriors.

Having been coached by Vancouver’s top jazz and classical trumpet players, he had a highly developed playing style and was quickly seen as an asset for his knowledge of his instrument’s history. Gary Crosby, the bassist who runs Dune Records and leads Jazz Jamaica, was an early supporter and encouraged Phelps to form and co-lead Empirical, a band that achieved the rare distinction for UK jazz musicians of gaining world-wide attention.

Another admirer is Phelps’s boyhood idol, Wynton Marsalis who, in 2012, hired Phelps to play with the Jazz at Lincoln Center Orchestra in performing Marsalis’s Congo Square. A ground-breaking evocation of the corner of Marsalis’s native New Orleans that was the only space in America where African slaves could play their own music, it was, says Phelps, a weighty work.

“It was an amazing experience for me, doubly so because I was given Wynton’s chair,” he says “I had to take his solos while my childhood hero conducted me. It was hard music but it made me a better player all round. It certainly made me practise a lot more and it taught me to perform better under pressure and to play at a high level whatever the circumstances.”

Aside from his recuperative trip to Thailand, Phelps has spent much of the past two years travelling. He toured to New York, Hong Kong and Brazil with director Peter Brook’s play The Suit and enjoyed being able to experience the food, the culture and the people rather than the hectic itinerary of hotels, venues and airports that goes with a musician’s normal tour schedules.

That experience, as well as touring with two of Brazil's great musical exports, Ed Motta and Banda Black Rio and Afrobeat Master Orlando Julius, has also fed into Free As The Birds, where Phelps sings for the first time as a professional musician.

“I used to sing in a jazz choir, and I’ve dabbled over the years, and then I wrote the track Angel for the album with the intention of hiring a singer,” he says. “People have asked why I don’t sing so I thought, let me try it. Now I’m singing with the band. I sing through the horn anyway, because that’s the truest way to play, direct without a bridge between you and the instrument, and I think singing adds something. It gives me a deeper scope.”