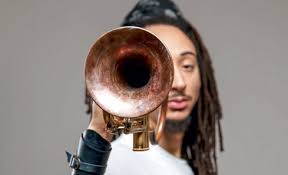 Theo Croker only meant to go to Shanghai for three months but the Chinese city became the trumpeter’s home for seven years. It was also a school of sorts, as he learned how to play in different situations and how to find his own personality. He met one of the most important influences on his career to date, the singer Dee Dee Bridgewater, there too.

Florida-born Croker, who makes his Scottish debut at Glasgow Jazz Festival this week, has had a number of significant mentors in his musical life, starting with his grandfather, trumpeter Doc Cheatham, and continuing with the restlessly inquisitive Donald Byrd and the similarly enquiring Roy Hargrove. It was after meeting Bridgewater, however, that he began touring and recording and making his name.

“I was playing in the trumpet section of a big band that she was singing with in Shanghai,” he says down the line from New York, where he’s just finished a rehearsal for the follow-up to his Escape Velocity album. “After I took a solo she gave me this come hither signal and asked what I was doing. I was actually going off to play my own gig, so she came along and sat in with my band and we stayed in touch. The next time she came to Shanghai she was with Herbie Hancock and she sat in with my band again. Then she asked if I’d ever thought of making a record and offered to produce me.”

Bridgewater not only kept her word on that, she took Croker off on tour and used his band as her backing musicians, an experience that showed Croker just how strong a personality he was dealing with. “We tried to take her somewhere musically and she ended up taking her with us, whatever we tried to do,” he says. “She’s amazing. People say she’s a modern day Ella or Billie Holiday, and she has all that history in her music, but she’s really her own person, her own spirit, and she has so much energy and knowledge. I’ve learned so much just being around her.”

Croker’s introduction to jazz trumpet came through his grandfather, Doc Cheatham. Although he was only twelve when Cheatham died in 1997 he has strong memories of hearing him play and although Cheatham, whose career stretched from gigs with Bessie Smith in the 1920s right up to his nineties, didn’t try to force music on his grandson, he watched his progress and was quietly influential and encouraging from the wings.

“When I started to show that I might be serious about the trumpet he told my mum what horn to buy and there was one Christmas, not long after I started playing, that he gave me all these mouthpieces,” he says. “So I was the guy who had been playing for, like, six months but I had fifteen mouthpieces. That was funny but I listened to him playing and there was something almost triumphant in his music. The last time I heard him he did a 90-minute set with just a piano player and now that I’m a trumpet player, I think about that and I wonder, how did he play so long and yet sound so clear, so warm and so melodic? He had all that tradition in his playing, which is really inspiring.”

Croker puts great store in learning what’s gone before. He likens knowing jazz history to reading books in order to have an intellectual conversation. Having gone to Oberlin College Conservatory in Ohio, he studied with the aforementioned Donald Byrd, a player who travelled from bebop to funk and while there played with drummer Louis Hayes, who made history as a founder member of Cannonball Adderley’s pioneering soul-jazz band.

After graduating, in 2006, he wanted to play as much as possible and when a three-month residency in Shanghai came up he jumped at the chance, little realising that the Chinese city had such a vibrant music scene. His three month stay extended to six months and when he returned to the U.S. he found he couldn’t get enough gigs to sate his appetite. So he went back to China.

“I was addicted to playing and I don’t know what it’s like now because it was changing when I left, but there was more work in Shanghai than there were musicians,” he says. “I played in salsa bands, and that was good training because you couldn’t play like Miles unless you wanted the dancers to look at you funny, and I had my own band. The best way to learn is to play and the best way to find yourself is to keep playing. People talk about moving the music forward and I want to appeal to a young audience but the music that’s gone before is just as important as where the music’s going next.”