The Danberrys - Country couple play first dates outside the U.S. 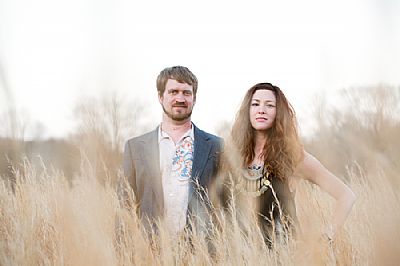 It’s the kind of break that some of the characters on TV series Nashville might actually kill for: a gig at the Ryman Auditorium supporting top singer-songwriter Robert Earl Keen to promote your first EP.

This was the scenario Ben DeBerry and Dorothy Daniel – aka the Danberrys – found themselves in after being heard by a producer at 650 AM, the radio station that has hosted legendary country music programme the Grand Ole Opry at the Ryman in Nashville for some ninety years.

And to add to the romance of the storyline, DeBerry and Daniel, unlike many musicians who are trying to make it in Music City, Tennessee, grew up in the Nashville area. In fact, DeBerry had appeared on the Ryman stage before, as a teenager, playing school guitar recitals, which takes a little bit of the gloss off the story. There is, however, some of the required bad luck and trouble in the Danberrys’ history too.

“Back in the early 1990s, the Ryman was going through a major renovation and wasn’t operating as a regular venue but my guitar teacher was good friends with the manager and he made it possible for me to play there,” says DeBerry. “It wasn’t quite the same as appearing on the Grand Ole Opry, but it was a thrill at the time and it was an even bigger thrill to appear at the Ryman as professionals because it’s a sacred place for country music.”

DeBerry and Daniel met at college and dated for a while before going their separate ways. They’d sung in the same choirs before they met properly and DeBerry taught Daniel to play the guitar but neither had ideas of taking up music as a career at the time.

Five years down the line they ran into each other again in a Nashville bar at around two in the morning. By then Daniel was working as an accountant in New York and DeBerry was doing contract work in a variety of jobs by day and playing gigs by night. Both had recently gone through relationship break-ups and when Deberry told Daniel she was the only one he wanted to be with, the spark was rekindled and they decided to get married.

During the time they were apart they’d both been writing songs and they started writing together. Just after Daniel moved back to Nashville from New York, however, she developed a problem with a nerve in her arm.

“I’d quit my job and I got quite bitter, to be honest,” says Daniel. “I couldn’t play the guitar and I went through a dark time when Ben literally had to haul me out of bed every morning. We’d moved to East Nashville, which is a really thriving musical community with a lot of energy, and this nerve problem was making me feel excluded. So eventually I went back to accounting. I didn’t even want to listen to music.”

Micol Davis, of the Nashville-based husband and wife team Blue Mother Tupelo, helped Daniel regain her appetite for music and suggested an alternative to playing the guitar that has become one of the Danberry’s calling cards.

“Micol comes from Indianola, Mississippi and she has this funky, gospel feel in her music that I just fell in love with,” says Daniel. “She also plays tambourine and this turned out to be just what I needed. It was great therapy, both physically and mentally, and we started following Blue Mother Tupelo around so that I could learn what Micol was doing.”

While Daniel was making a study of the tambourine (she’s also looked into Brazilian percussionist Airto Moreira’s technique), DeBerry hit a particularly strong seam of composition. He played these new songs to a sound engineer friend who offered to produce a professional recording for nothing, with the proviso that DeBerry and Daniel released it.

The aforementioned EP, Company Store, and the gig at the Ryman with Robert Earl Keen followed in 2010. Since then, the Danberrys have released two full-length CDs and toured the US extensively, using Daniel’s accountancy qualifications and DeBerry’s various skills to organise tours and record releases entirely independently.

For their first trip outside of the US, which brings them to Scotland this weekend, they’ll be joined by Geoff Henderson, a bassist whose background in jazz and improvised music gives them the freedom to sing and play whatever they choose.

“There are some songs we’ve recorded that we can’t perform as a duo but Geoff brings this adaptability and strength in his playing that means we can just concentrate on what we’re doing and know that he’ll be right there with us,” says Daniel. “That gig at the Ryman and everything else that’s followed has shown us that the problems I had with my arm have turned out to be a good thing in a way.”