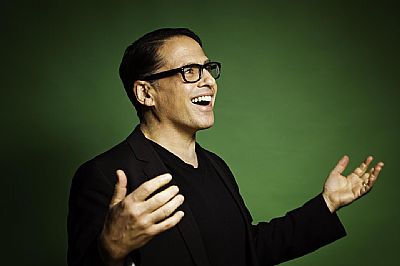 If any legal problems arise during SymphRONica’s Fringe run at the Scottish Arts Club, the band’s leader, Ron Davis, shouldn’t be fazed. Davis has a degree in law that he still calls upon from time to time in Toronto to subsidise his jazz experiments.

It’s part of a background that includes piano studies with a teacher who was taught by both Oscar Peterson and David Saperton, who was not only George Gershwin’s brother-in-law but who could trace his pianistic lineage back to Beethoven, and an interest in pop music that began with the Beatles and continues with Cold Play and other contemporary bands.

“I’m not sure if you’ll hear law in the music, although it’s certainly helped me to create it,” says Davis via Skype from Canada. “But all that other stuff – and more – has fed into what I play with the band. These days it’s not all that unusual, in fact it’s quite easy, to have a playlist on your phone or wherever that will take you from, say, Bach to Rhianna. And it’s great that that’s happening but I had the public lending library to thank for nurturing my catholic taste because they let you borrow vinyl and one week I’d be listening to Beethoven, the next Art Tatum and so on.”

From his conversation it sounds like Davis wasn’t neglecting his studies of the classics either. Roman and Greek heroes and heroines flow easily through his chat and he’s keen to point out that symph is Greek for with, an important consideration in naming SymphRONica. His own first name may be prominent in the band’s title but he’s not about to forget all the other ingredients that go into making a SymphRONica performance.

“I’m actually very hands off,” he says. “I have a musical director, Kevin Barrett, who plays guitar in the band and is responsible for getting the music as close to perfection as possible onstage, and as well as playing cover versions of pop songs, a Sephardic folk song, something by Ralph Vaughan Williams and a jazz standard, I’m happy for other musicians in the band to bring in compositions and arrangements. So it’s not all about me.”

SymphRONica arrived some fifteen years ago after a long gestation period. Having reached a stage where he was financially able to play music more than practise law, Davis had become established in Toronto as the leader of his own jazz trio, quartet and sextet. It had long been his intention to blend the classical music he trained in with the jazz that was, and is, his passion. There was no shortage of examples for him to follow - Charlie Parker with Strings, Stan Getz’s Focus to name but two – but he wanted to experiment with something different.

Enter the Runcible Spoon, five women based in Toronto whose pianist, Tania Gill, Davis describes as “an undersung genius at music’s cutting edge.” The group’s instrumentation – cello, clarinet, voice, viola and piano – intrigued Davis and he started working on string arrangements with Gill. This led to an album, Shimmering Rhythm, which pitched viola, cello and two clarinets in with Davis’s jazz trio and in turn led to the first iteration of SymphRONica, which was Davis’s jazz trio with a full symphony orchestra.

“For obvious financial reasons, but also for musical ones, I pared this down to a string quartet with an electro-acoustic jazz quartet – piano, guitar, bass and drums – because I wanted all the players to have an input,” he says. “I also liked the idea that, as an octet, we could include different styles of music and switch from a jazz standard or something based on I Got Rhythm to a folk tune more naturally than with an orchestra and yet still have a certain richness of sound.”

In Canada most of SymphRONica’s work is in Toronto, so Davis has the luxury of working with a regular personnel that has developed the music to a high quality. Touring abroad, which involves the core trio of Davis, Barrett and violinist Aline Homzy recruiting local players to make up the octet, could be open to the risk of not finding musicians with quite the same openness but has thrown up some pleasant surprises. On their previous Fringe mission last year, they encountered Alyn Cosker, drummer with the Scottish National Jazz Orchestra and dozens of other projects, who will be with them again this time.

“Generally we’ve been lucky to get musicians with the vision to make the music happen,” says Davis. “But Alyn went beyond that. When we played the first number in rehearsal, Kevin and I looked at each other and mouthed ‘Wow.’ We didn’t have to tell Alyn what we wanted because he just made it his own. We’ve developed some new music since then, including a piece by our regular cellist that’s kind of Bach meets heavy metal, and we can’t wait to hear how Alyn makes that sound.”