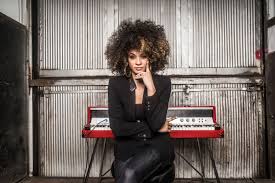 A neighbour’s misfortune proved the trigger for Kandace Springs’ career in music. It’s a career that has seen the Nashville-born singer-pianist courted by the team behind the multi-million selling Rihanna before signing to legendary jazz label Blue Note, and hanging out with Prince, who invited Springs to sing on the thirtieth anniversary of Purple Rain at Paisley Park after hearing her singing online.

Living in Nashville, Springs grew up surrounded by music. Her father, Scat is a session singer who has worked with Aretha Franklin, Chaka Khan and Michael McDonald as well as names more closely associated with Nashville, including Garth Brooks. In time, Kandace would earn pocket money for adding her voice to her dad’s in the studio but it was the arrival of a piano in the house when she was ten that really piqued her interest.

“The lady who owned the piano got involved in drugs and was evicted,” says Springs, this year’s Edinburgh Jazz & Blues Festival brochure cover star. “She asked my folks to look after it until she got back on her feet. Then friends of my dad’s showed me my first jazz chords and that was it. All I wanted to do was play the piano.”

These  friends of her dad’s turn out to be Regi and Roy Wooten whose brother Victor is one of the best bass guitarists on the planet and plays, alongside drummer Roy, in banjo virtuoso Bela Fleck’s bluegrass-jazz fusioneers, the Flecktones. Regi Wooten became Springs’ informal piano teacher when it became clear that she was serious about the instrument. Soon, at Wooten’s suggestion, she was listening to jazz piano masters Art Tatum, Oscar Peterson and Bill Evans and teaching herself to play Chopin.

When her dad gave her Norah Jones’s Come Away with Me album around the time of her thirteenth birthday, Springs added two further ambitions to her dream of becoming a piano player: becoming a singer and recording for Blue Note Records.

“I used to look at the cover of Come Away with Me and think it would be so cool to be on that label,” she says. “I didn’t know Blue Note had such a great history in jazz at the time but the more I found out about its legacy, the cooler it became.”

Springs became fixated with the last track on the album, The Nearness of You, especially. Armed with the sheet music for the song bought on a shopping trip with her mum, she learned to play and sing it and at a music camp a few months later she performed it in front of an audience for the first time. The response - “they went nuts” - made her think she might just be able to make it in music.

Through more friends of her father, three years later she was introduced to Evan Rogers and Carl Sturken, the songwriters who, among other successes, developed Rihanna into a star. One listen to Springs convinced them to sign her but Springs didn’t feel ready for this at the time and besides, pop stardom wasn’t what she was after.

She wanted to support herself while she worked out her next move, so she left home and took a job in an hotel as a pianist-cum-car valet.

“The valet part came first,” she says. “I did that for about two years, parking everything from trucks to Ferraris, then they gave me a job in the lounge in the evenings as well.  So I’d park people’s cars in the morning and entertain them at night. It was great. It let me work on the music I really wanted to play. I never studied music formally, so this was like my schooling.”

With a repertoire of songs learned from Norah Jones, Nina Simone, Billie Holiday and Roberta Flack and a few of her own, eventually she felt ready to try for a deal with her dream label. She swears she didn’t know the connection between the song she began her audition for Blue Note with and the company executive she was singing for, otherwise she might have chosen something different.

The song, I Can’t Make You Love Me, first came to major public attention when Bonnie Raitt featured it on her 1991 hit album, Luck of the Draw. As Springs finished singing it and prepared to sing another song, Blue Note president, Don Was, called out, “That’s the best arrangement I’ve ever heard - and I produced the hit version!” Was signed her immediately.

“That was amazing,” says Springs.

Amazing things just seem to happen to Springs. When she posted her version of Sam Smith’s Stay With Me on music website OKplayer, she got a message from none other than Prince. They became good friends and the custom-made leather jacket he gave her is one of most prized possessions.

“I was still trying to figure out my sound when we met but he gave me great advice,” she says. “He told me I needed to do what comes naturally to me, and he was absolutely right.”