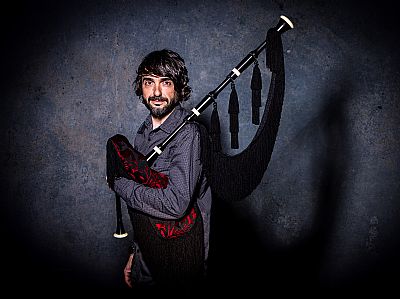 Jose Manuel Tejedor looks forward to appearing at the annual Piping Live! festival in Glasgow with mixed emotions. No stranger to the city, having played at Celtic Connections several times with his family group, Tejedor, the internationally acclaimed exponent of the Asturian bagpipe, the gaita, has a new group and new music to share with the Piping Live! audience.

He is, he says, very excited to be back in Glasgow but he still misses his friend and mentor, the Pitlochry-born bagpipe master and maverick Gordon Duncan, who died in 2005, and feels Duncan’s loss especially when he is over in Scotland.

“I met Gordon when I was fifteen or sixteen and he was a real inspiration to me,” says Tejedor down the line from his home in Aviles in Asturias, an autonomous community in north-west Spain that has its own traditions in song, dance and instrumental music. Rimsky-Korsakov borrowed some of these tunes for his Capriccio Espagnol but it was Duncan’s evangelism for Asturian music in general and Tejedor’s in particular that Tejedor valued.

“Gordon was an amazing musician and he wrote great, great tunes but he was very kind to introduce our music to Scotland and probably some other countries too,” says Tejedor. “He was very unselfish in that way and always very encouraging.”

Tejedor started to play the gaita at the age of nine. His father was learning the instrument at the time and the youngster became fascinated as he watched and listened as his dad produced his first tunes. Soon the whole family was learning to play music. Jose and his brother, Javier played the gaita (Javier later took up the accordion and percussion), and their sister, Eva played the tambourine and sang. Evenings and weekends at home were “very hectic,” says Jose.

They became even more hectic when Jose began entering – and winning – piping competitions. He is understandably very proud of his achievement in thrice winning the Macallan Trophy, now known as The McCrimmon Trophy, the coveted prize for elite solo pipers competed for every year by invitation only at the Lorient Festival Interceltique in Brittany.

“I enjoyed going in for competitions, especially when I was successful,” he says. “Sometimes Javier would enter with me but often I would be competing alone and it took a lot of work, a lot of practice. The level of piping is these competitions is very, very high and you have to be constantly at your best, so I put a lot of time into preparing for them but I don’t mind because I think it made me a better player and going to Lorient every year definitely helped me to grow as a musician.”

In the early 1990s Jose, Javier and Eva formed Tejedor. Their first album, Texedores De Suanos, had another Scottish connection, being produced by Phil Cunningham (fiddler Duncan Chisholm also appeared on it) and for twenty years the three siblings co-led the group. Eva left to go solo in 2010 and Jose and Javier continued. They still play and write music together but Jose has taken a break from Tejedor to form the trio he brings with him to Piping Live!

The musicians he’s working with have similar pedigrees to his own. Ruben Bada is a bouzouki player and prize-winning fiddler who has recorded with the master uilleann piper John McSherry, on the albums Tripswitch and Soma, and they’re joined by keyboards player Richard Garcia, who played in traditional bands before going on to work in TV and film soundtracks.

“I wanted to work with Ruben because he’s such a strong player with a great touch on melodies and Richard’s work in film music makes him a good choice because a lot of my music is inspired by images,” says Tejedor. “I’m inspired to write by different things, my family, my daughter and my wife, but maybe my biggest inspiration is Asturias itself, the people and the mountains. It’s a challenge to capture beautiful sights in music but I enjoy that aspect of composition.”

Asturias, he says, is living through a “sweet moment” as the traditional music he fell in love with as a youngster is more popular than ever. The music had gone through a decline due to folk dancing and singing being appropriated for political purposes during the Franco years in Spain but it began to revive in the late 1970s and early 1980s.

“It wasn’t so popular when we were starting out but now it seems to be everywhere,” he says. “There are schools where children can learn to play, sing and dance in the traditional style near their homes. They don’t have to travel very far and there are lots of pipe bands and folk bands springing up. Traditional music is in a really healthy state in Asturias and it’s great to see people enjoying it so much.”