Skipinnish - Charting a rise towards the Usher Hall mosh pit 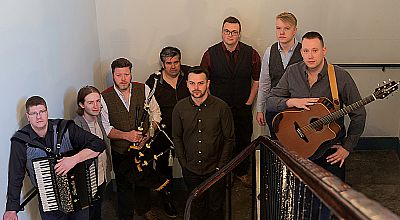 Angus MacPhail is facing a dilemma he never imagined would affect him and his band, Skipinnish. When they play the Usher Hall in Edinburgh next May, should they keep the venue theatre style throughout or have the seats downstairs removed to create a mosh pit?

Mosh pits possibly didn’t even appear on his radar when the affable but business-savvy MacPhail was lugging his accordion around village halls and bars in the Highlands and Islands with his partner in music, piper and whistle player Andrew Stevenson. Now they are – or can be – a major consideration.

Skipinnish is no longer the ceilidh band that MacPhail and Stevenson formed when they were students at the then Royal Scottish Academy of Music and Drama in Glasgow back in 1999, although dance tunes still figure in their repertoire. A turnaround in their fortunes when they began to concentrate more on performing songs in 2011 has led to an amazing surge in popularity, resulting in the band winning the Live Act of the Year title at the MG Alba Scots Trad Music Awards last weekend.

In July 2015, MacPhail was tweeting about a totally crazy day that had seen the band’s single The Island reach the top 60 in the official UK download charts and take the number 1 position in the world music download charts. The accordionist was shortly to offer Taylor Swift, Kanye West and Ed Sheeran consolation drams as Skipinnish, unbelievably, overtook these stars’ latest singles.

“It’s quite a feeling to see your own song out-selling these really well-known people,” says MacPhail with a certain wariness. This is a man who can sense he’s in a bubble that might burst at any moment but the moment seems to be a long way over the horizon as we speak.

As a record label owner who was very much at the cottage industry level when CD sales began to tail off he has seen the internet as the double-edged sword that killed off conventional music sales and yet gives instant access to an audience he never expected to reach. And mosh pits, where people can dance in a party atmosphere, are a by-product of this success, even as MacPhail wants to cater equally, if not more, to the section of his audience that prefers a comfortable night out in theatre seating.

The catalyst for the success that has seen Skipinnish sell out gigs at both Glasgow Royal Concert Hall and the Barrowland ballroom in recent times was, a touch ironically, the roof coming off the ceilidh house that MacPhail and Stevenson opened as part of the Skipinnish brand in Oban during the noughties.

“We’d just been ticking over with the band up to that point in 2011,” says MacPhail, who grew up on Tiree and grew into two of the island’s traditions, playing the accordion and sailing boats. “But when the roof blew off in a gale and took two years to replace due to insurance company problems, Andrew and I decided to change direction with the music.”

MacPhail has been writing songs since he was at school but he’d never done anything with any of them and has lyrics stored on laptops and phones that have still to see the light of day. For their Atlantic Roar album in 2013, in a departure from releases that might feature dance sets or MacPhail playing pibroch very impressively on the accordion, as one previous album had, they turned the focus on singer Robert Robertson. One track especially, Land Below the Waves, caught listeners’ attention. MacPhail was suitably encouraged and the next album, Western Ocean, released the following year, took the band up to another level.

“People have said that we’re following in Runrig’s slipstream, or whatever,” says MacPhail. “But we couldn’t have sat down and planned what’s happened and we certainly didn’t set out to emulate Runrig because we couldn’t. No-one can. With Runrig, it was the right people at the right time doing the right thing, and they are an inspiring example with the depth of tradition that the MacDonald brothers brought to their songwriting allied to the musical genius of Malcolm Jones. They did it first and when they stop next year, they’re going out at the top, so, no, we’re not the next Runrig.”

MacPhail’s songs may not have the lyrical depth of the MacDonald brothers’ but he has struck a chord with a keen and receptive audience. His writing, heconcedes, is simple and as someone who has spent years on the seas around the Hebrides and putting in at the island ports, on both fishing boats and pleasure cruisers, he knows families first-hand who have been touched by tragedy. He won’t say, though, what events have triggered songs.

“I’m not saying my songs are good because that’s for other people to judge,” he says. “But there’s not a word or a line or a verse or a chorus in any of them that I couldn’t tell you the background to if I chose. Everything in these songs is there for a reason and the references might be specific when I write them but for me the songs become stronger if these references are seen as more general.”

Just as Skipinnish was beginning to really take off, with a sold out Glasgow Royal Concert Hall gig during Celtic Connections one of the highlights of 2016, the band suffered a double blow when singer Robert Robertson and keyboards player Ross Wilson left to form their own band.

At first MacPhail thought this might be the end of the band. He saw all the work that had taken Skipinnish from sessions in the Park Bar in Glasgow during his and Stevenson’s student days to standing ovations at Glasgow Royal Concert Hall as coming to nothing. The timing couldn’t have worked out better, as it turned out, as Norrie MacIver, who had been singing with Gaelic folk-rockers Manran, suddenly became available and Skipinnish was able to continue with an almost seamless transition.

Released earlier this year, The Seventh Wave, the first album to feature MacIver, is the band’s biggest and boldest production to date and has met with strong reviews and overwhelmingly enthusiastic fan reaction.

“The speed at which gigs have been selling out has been amazing,” says MacPhail, who has been monitoring ticket sales in Perth and Aberdeen, neither city being in what you might call the Skipinnish heartlands, with satisfaction tinged with a certain fatalism. “We played in Perth back when we were a ceilidh band so to be selling out Perth Concert Hall, as it looks like we’re about to do, is incredible. I’m always conscious that success is fickle, though.”

As their Live Act of the Year award at the MG Alba Scots Trad Music Awards 2017 suggests, Skipinnish are giving people what they want to hear.

“It’s still a Highland night out in a sense,” says MacPhail. “But I think what we do travels quite well. There’s nothing complicated and nothing in the songs is contrived. It’s all about things that are happening in our lives and I think that makes it real.”